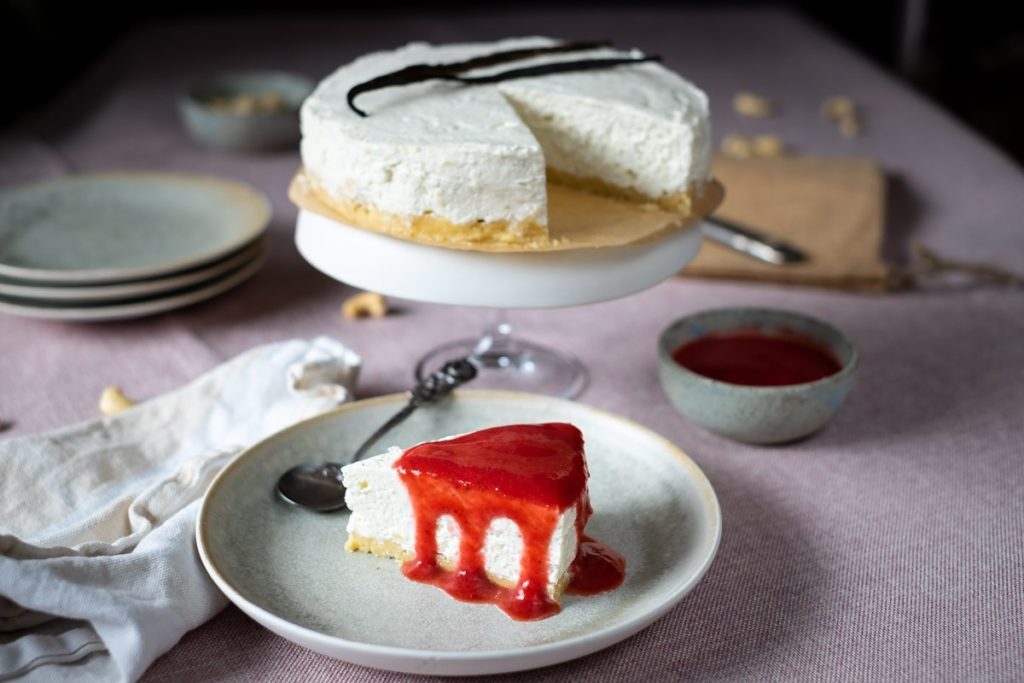 Who loves vanilla as much as I do – raise your hands! I adore every keto-friendly vanilla dessert. The problem is, if I want to have one, I usually have to make it myself. And with vanilla cakes and custards, this process, more often than not, includes cooking, tempering, or baking. That is because of the usual egg yolk inside. Well, not with this beauty. The no-bake low-carb vanilla cheesecake is completely egg-free and therefore requires no heating.

This recipe is sponsored by Now Foods.

I’ve decided to make this recipe low-carb and not too strictly keto. The crust for the cake contains cashews, that is why serving comes out to be a tad higher in NET carbs. Some of you will agree that 6 g NET carbs per piece can still fit your daily carb intake, while others will argue that cashews used in the cake are not keto-friendly.

While I haven’t been bothered by staying on a strict low-net-carb-keto all days lately, I afford stuff like cashews every so often. On the other hand, if any of you want to avoid cashews for whatever reason, I totally understand and suggest you find an alternative type of nut to make the crust. Blanched almonds, for example, would be an excellent choice.

What key ingredients do I need to make a No-Bake Cheesecake?

As mentioned before, you will need no eggs as a key ingredient. But do stack on heavy cream, cream cheese, and vanilla (extract as well as vanilla seeds or caviar).

For sweetening the filling, I’ve used Now Foods Xylitol. Or you can use any erythritol-based keto-friendly sweetener that is as sweet as sugar if you want to lower the number of calories per serving by approximately 5%. To keep the filling stable, I’ve added soaked and melted Now Foods Beef Gelatin Powder.

Add some lemon zest and a dash of salt, and you can quickly see that this no-bake keto dessert is far from being demanding on the number of ingredients!

I think it would be fair of me to also mention that I’ve given it a few tries to make a vegan alternative of the no-bake low-carb vanilla cheesecake. I used coconut cream and tried to fit in the vanilla flavor as nicely as possible. It might have been just me, but I simply disliked the coconut vanilla cream filling so much, I decided against posting the recipe. Besides, the texture of the filling was just not right, although I had tried using a few different brands of coconut cream.

To start off, grind cashews using an S-blade food processor, and melt cacao butter in a microwave. In place of cashews, feel free to use any type of nuts of your choice. Blanched almonds are great for making this dessert more keto-friendly! Besides, cacao butter can be partly or entirely replaced by softened dairy butter. I’d like you to know, though, that cacao butter adds a lot of the delicate flavors to the crust!

Next, in a medium bowl, thoroughly combine ground cashews, melted butter, dash salt, and sweetener. At this point, you can use an S-blade food processor or an electric mixer. Press the mixture into a round cake pan and refrigerate for at least 30 minutes for the crust to harden.

NOTE: The recipe calls for either three tablespoons of sweetener of choice, which is as sweet as sugar, or ten drops of Now Foods Vanilla Monk Fruit combined with two tablespoons of keto-friendly sweetener.

Now, prepare gelatin according to instructions. This process usually involves soaking the gelatin in a little water for a few minutes, then melting it in a microwave. Next, split a vanilla bean in half and scrape out the vanilla seeds.

NOTE: Make sure that the cream cheese mixture and melted gelatin are of similar temperature before mixing them together. That is to prevent getting any lumps in the filling.

In a separate bowl, using an electric mixer, whip whipping cream to stiff peaks. Using a rubber spatula, thoroughly combine the cream cheese mixture with the whipped cream. Spread the filling on top of the crust that had been stored in the fridge for at least 30 minutes.

Chill in the refrigerator for a minimum of 1 hour. Optionally, make some raspberry or strawberry sauce by processing raw berries in a food processor before serving the cake.

By the way, if you like what you see or try this recipe out, do not forget to leave a comment below. Thank you!

FillingSoak the gelatin powder in a couple of Tbsps. of water and melt it in a microwave. Let it cool down to room temperature before use, but make sure it remains runny.Split the vanilla bean in half and scrape out the seeds.Using an electric mixer, thoroughly combine cream cheese, lemon zest, powdered sweetener, vanilla seeds, and vanilla extract.Add runny and room temperature gelatin and mix thoroughly.Again, using an electric mixer, whip the heavy whipping cream until stiff peaks form. Using a rubber spatula, thoroughly combine the cream cheese mixture and the whipped cream.

Take the crust out of the fridge and spread the cheesecake mix over the top. Chill in the fridge for a minimum of 1 hour.

Optional: Mix some fresh or frozen berries in a blender to make a topping that will add some sourness to the sweet and creamy cake.

When making the filling, make sure that the melted gelatin has been cooled down to room temperature (but still runny) before mixing it into the cream cheese filling to avoid lumps. You can use any type of nuts instead of cashews to make the cheesecake more keto-friendly. Blanched almonds would be a great choice. If you use almonds instead of cashews, the recipe comes out to be 351 Calories, 34 g total fat, 6 g protein, 5 g total carbs, and 3.3 g NET carbs. Insead of the optional Vanilla Monk Fruit liquid sweetener, use 1 additional Tbsp. of preferred keto-frendly sweetener that is as sweet as sugar. If you use Xylitol instead of a zero-calorie sweetener, the recipe comes out to be approximately 364 Calories per serving, while the macros remain roughly the same.

We love seeing what you’ve made! Tag us on Instagram @mysweetketo or leave a comment & rating below.

* Percent Daily Values are based on a 2000 calorie diet.