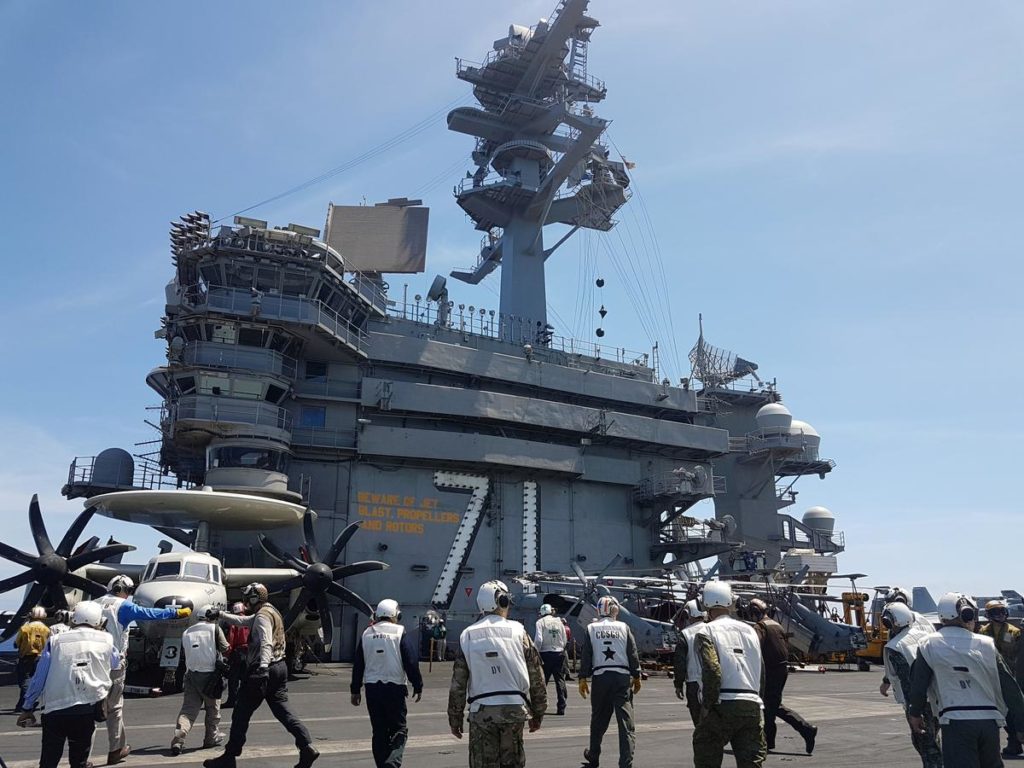 WASHINGTON (Reuters) – A U.S. Navy sailor died on Monday after contracting the coronavirus aboard the U.S. aircraft carrier Theodore Roosevelt, whose captain was fired after warning his crew would die unnecessarily unless strong action was taken.

The sailor, the first active-duty U.S. servicemember to die from coronavirus complications, was admitted to intensive care on April 9 after being found unresponsive in his quarters. The sailor had tested positive exactly two weeks ago on March 30, the Navy said.

“I am keenly aware of the dedication and commitment of our Sailors and Marines in service to our Nation – in war, peace, and this unfamiliar time of COVID-19,” acting Navy Secretary James McPherson said in a statement, adding that he would support their efforts and safety.

So far, about 12% of the Theodore Roosevelt’s crew of 4,800 have tested positive for COVID-19, the respiratory disease caused by the coronavirus – in one of the most visible demonstrations of how the pandemic is affecting the U.S. military.

A U.S. official, speaking on condition of anonymity, said four additional sailors from the nuclear-powered carrier had been taken to the hospital to be monitored and were in stable condition.

The official said that of the 585 personnel on the carrier who had been tested, 428 were asymptomatic while the remainder had shown symptoms.

‘SAILORS DO NOT NEED TO DIE’

Late last month the aircraft carrier’s commander, Captain Brett Crozier, called on Navy leadership to evacuate the vast majority of the crew and to clean the ship in a letter that leaked to the public – embarrassing the Navy.

“We are not at war. Sailors do not need to die. If we do not act now, we are failing to properly take care of our most trusted asset – our sailors,” Crozier wrote.

That letter by Crozier, which was obtained by a number of news outlets, set in motion a series of events that led to Crozier’s firing and the resignation last week of acting Navy Secretary Thomas Modly.

The Navy this week is expected to release the results of an investigation into the events surrounding the letter, and officials have not ruled out reinstating Crozier, who is seen as a hero by the ship’s crew, as captain of the carrier.

The Navy has carried out much of what Crozier had been calling for. About 4,000 sailors have been moved from the carrier to facilities in Guam, where the ship has been docked after the number of cases started increasing.

The episode deepened upheaval in Navy leadership. The Navy’s last secretary was fired in November over his handling of the case of a Navy SEAL convicted of battlefield misconduct. The Navy SEAL had won the support of President Donald Trump.

In a sign of the impact the virus was having on the Navy, it announced on Monday that another aircraft carrier strike group, the Harry S. Truman, would remain at sea, after completing a deployment in the Middle East, rather than coming into port to protect sailors from getting coronavirus.

“In the face of COVID-19, we need to protect our most valuable asset, our people, by keeping the ship out to sea,” Vice Admiral Andrew Lewis, commander U.S. Second Fleet, said in a statement. An update would be provided to the crew and their families in about three weeks.

Sailors assigned to four carriers, including the Roosevelt, have now tested positive for the coronavirus.