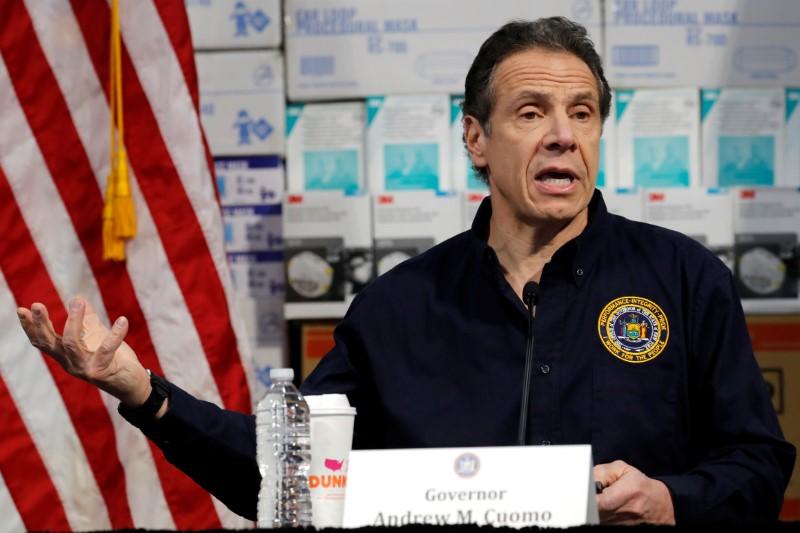 (Reuters) – New York Governor Andrew Cuomo on Monday said “the worst is over” for the state hit hardest by the novel coronavirus, as hospitalizations appeared to be reaching a plateau and deaths increased by 671, the lowest daily total in a week.

FILE PHOTO: New York Governor Andrew Cuomo speaks in front of stacks of medical protective supplies during a news conference at the Jacob K. Javits Convention Center which will be partially converted into a temporary hospital during the outbreak of the coronavirus disease (COVID-19) in New York City, New York, U.S., March 24, 2020. REUTERS/Mike Segar

Cuomo, who has been working closely with the governors of New Jersey and Connecticut in response to the pandemic, also indicated that he would announce a coordinated regional plan on reopening businesses and schools later on Monday.

Cuomo told a briefing that an additional 671 New York residents died on Sunday, down from 758 a day earlier and the lowest daily total since April 5. He also pointed to the apparent plateauing of hospitalizations as a positive sign.

But he hedged his declaration that New York had passed the deadliest stage with a warning that all the gains achieved through social distancing could be undone if “we do something stupid” and relax those restrictions too quickly.

“We can control the spread. Feel good about that,” Cuomo said. “The worst is over, if we continue to be smart going forward.”

New York, the epicenter of the outbreak in the United States, has now recorded 10,056 deaths from COVID-19, the respiratory disease caused by the novel coronavirus, or nearly half of the total across the country.

While he did not provide details on the reopening plan, Cuomo has said that it makes sense to work closely with the neighboring states of Connecticut and New Jersey, given the interconnectedness of businesses and workers in the region.

Cuomo said the reopening would be in incremental steps and that he believed those steps should be informed mainly by public health experts and not politicians.

In reopening the economy, Cuomo said the focus would be on “re-calibrating what is essential” and would at first involve more “central” workers. He said more testing would be needed to collect information about who should be going to work.

“You’ll start to open that valve on the economic activity, and you’ll turn that valve very slowly,” he said. “Do it carefully. Do it slowly and do it intelligently – more testing, and more precautions.”

Reporting by Nathan Layne in Wilton, Connecticut and Maria Caspani and Jessica Resnick-Ault in New York, Editing by Franklin Paul and Rosalba O’Brien