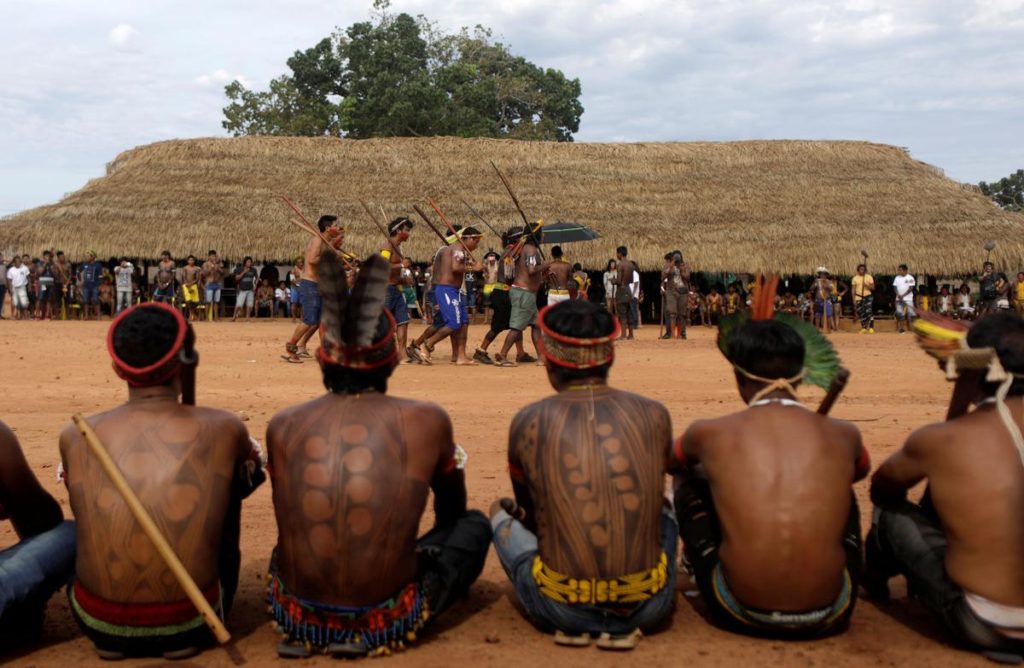 BUENOS AIRES/BRASILIA (Reuters) – Indigenous peoples across Latin America are cutting off their communities from the outside world, worried that the coronavirus could pose a grave threat to their culture by putting at risk tribal elders, the keepers of their heritage.

From the rocky Patagonian regions of Argentina to the lush Brazilian Amazon and the Andean villages of Colombia, indigenous groups are barricading villages against outsiders and doling out harsh punishment to members who violate quarantine rules.

Latin America is home to 42 million indigenous people, making up about 8% of the population, according to World Bank data, yet their way of life is already threatened by rapid development in mining, oil extraction and deforestation.

The virus represents a new, and potentially catastrophic, risk. The elderly – the group most vulnerable to complications from COVID-19 – are the guardians of many traditions and languages threatened with extinction.

“The fundamental importance of elders is that they hold the collective memory, particularly regarding our identity,” said Eduardo Nieva, a community leader for the Amaicha de Valle indigenous group in northwest Argentina.

Because Latin America’s indigenous populations are often preliterate, their history may not be written: it is passed down the generations by elders through storytelling.

“All indigenous wisdom is oral, passed from generation to generation, so the elders carry all the accumulated experience,” Nieva said. “That experience – the one they keep – is what we are protecting.”

In the Amazon, on Brazil’s oldest indigenous reservation, the Xingu, guidance from elders is key to performing the Kuarup dance ritual that brings together the community’s 16 tribes each year to celebrate life, death and rebirth.

“We are very worried. If we lose our elders we will lose their knowledge not just of cultural traditions and religious rituals, but of our traditional medicine,” said Jair Kuikuro, 32, a filmmaker who documents indigenous life in the Amazon.

His grandmother is a custodian of a sacred chant for a women-only fertility ritual called the yamurikuma.

“If she gets the virus, if she goes, her song will be lost without trace,” said Kuikuro.

The rural parts of Latin America are among the last places on the planet to be affected by the coronavirus, and testing in these remote areas is limited, but official figures suggest the virus is beginning to spread there.

Communities are taking special precautions to make sure older members have food and supplies without needing to venture beyond their territories, several indigenous leaders said.

The continent’s indigenous groups, some of which only number in the hundreds, are particularly vulnerable to new infectious diseases, said Carolyn Stephens, a professor of global health at University College London who has worked with indigenous communities around the world.

Stephens cited the first wave of European colonization in Latin America that introduced diseases like smallpox – resulting in millions of deaths among native populations – as an example of what could happen with a new virus.

In Argentina, home to at least 35 officially recognized indigenous communities, fears for the elderly have led some groups to take extreme measures to insulate themselves from outsiders.

In northern Argentina’s Tucuman and Salta provinces, some communities have barricaded roads leading to their villages, said Relmu Ñamku, a Mapuche leader.

In other cases, community guards – who previously policed drug trafficking and other crime – have been deployed to keep away outsiders.

In the Xingu in Brazil, locals remember how nearly half the inhabitants of a village of the Kalapalo tribe were wiped out by measles in the 1950s.

Roads into the park have been blocked and no outsiders other than medical personnel are allowed in.

A cellphone video from April on local media showed a young man who a community leader said had violated quarantine writhing in agony after receiving three lashes from a cow hide whip. Pasto leader Pablo Taimal confirmed the video’s veracity.

“Indigenous guards have been ordered to do what is necessary to safeguard the health and integrity of our communities,” said Taimal. He said they feared people crossing from Ecuador, where the coronavirus has overwhelmed the health system.

“As a Mapuche, if we take our known medicines, we will heal,” said Estela Astorga Porma, 77, a Mapuche woman in Chile’s southern region of Biobio.

The effectiveness of indigenous medicines to treat diseases like COVID-19 has not been proven.

It is also common tradition for younger people to go to the homes of elders to seek guidance in making decisions, community members said, a practice now on hold out of caution.

“Grandmothers are the community counselors. Older people are those who transmit ancestral wisdom, those who organize us, give order, advise spiritually,” said Rosa Ñancucheo, 61, a Mapuche woman from Chubut province in southern Argentina.

“Today, we meet less than before.”

Reporting by Cassandra Garrison and Marina Lammertyn in Buenos Aires, and Anthony Boadle in Brasilia; additional reporting by Oliver Griffin in Bogota and Jose Luis Saavedra in Biobio; Editing by Rosalba O’Brien