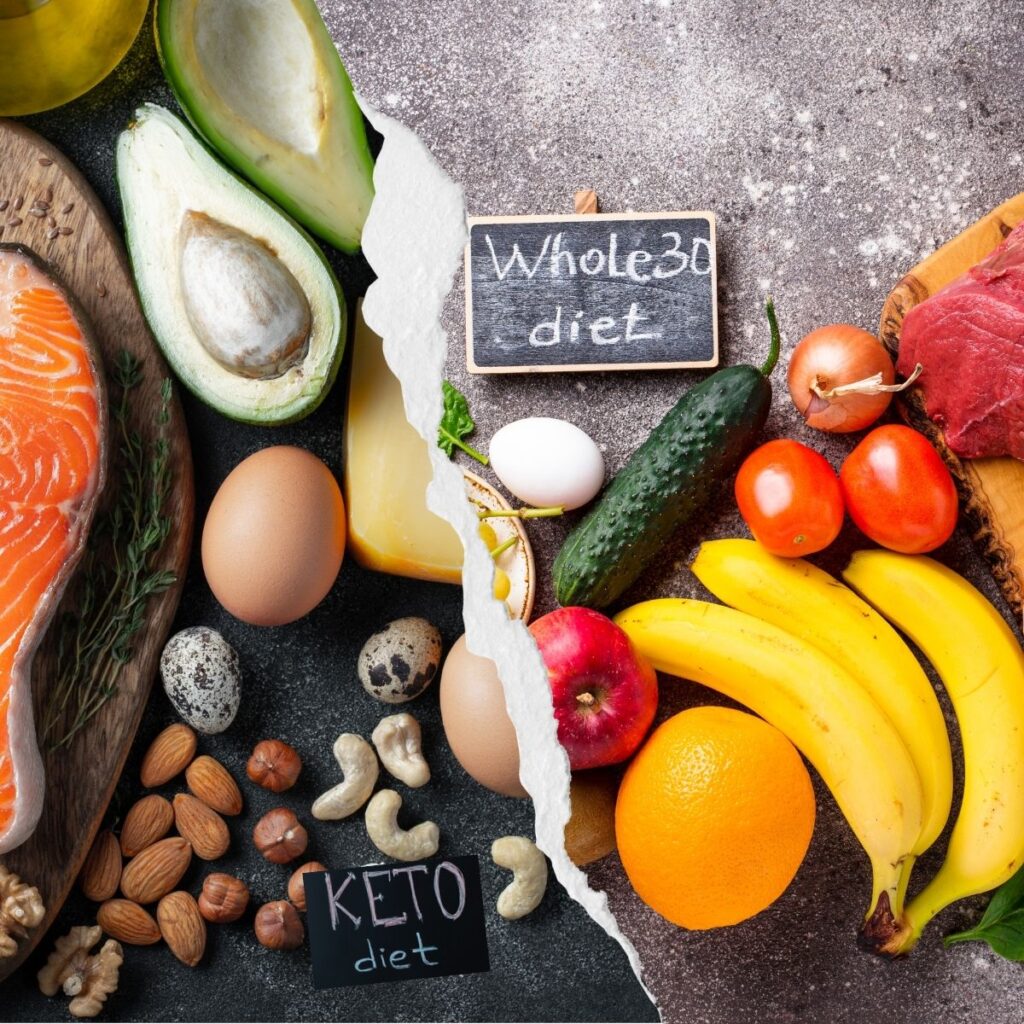 Keto vs. Whole30: How the Two Diets Compare

In the world of low-carb eating, two diets you’ll often see being compared are keto vs Whole30. One reason for this is that both eliminate sugar, grains, legumes, dairy milk, and a couple of other high-carb foods. But the similarities end there.

Upon closer look, you’ll notice keto and Whole30 are two very different approaches. They have different aims, histories, and metabolic effects. One of these also underwent greater scientific scrutiny than the other. However, this doesn’t necessarily mean one is better than the other. It all boils down to personal preference and your ability to stick to a diet.

But if you’re having trouble deciding which one to follow, read on to find out about the difference between keto and Whole30.

The ketogenic diet (keto, for short) is a type of very-low-carb diet. It’s also a diet that mimics the metabolism of fasting.

The word “ketogenic” means to produce ketones. Ketones are three acidic molecules — acetoacetate, beta-hydroxybutyrate, and acetone — that your body makes to replace glucose when needed (i.e. during fasting). When this happens, you’re in a metabolic state called nutritional ketosis, the hallmark of which is having blood ketone levels of 0.5 to 3 mg/dL.

Most people today follow keto to lose weight or to improve health, especially metabolic health. But its original purpose was to be an alternative treatment for intractable epilepsy. Popular versions of this diet are only slightly different from the original, which is mostly based around a specific macronutrient distribution:

Another way to look at keto macros is eating 20-50g of carbs per day, getting adequate protein, and eating fat until full. And to eat within these limits, you’ll need to avoid eating anything high in carbs like bread, rice, bananas, beans, and — of course — sugar.

The co-founder of Whole30, Melissa Urban, says her strategy isn’t a diet but a short-term reset. This 30-day reset is supposed to “help you curb your cravings and bad habits, boost your metabolism, heal your digestive tract, and calm your immune system,” according to the Whole30 website. Many also describe Whole30 as an elimination diet that aims to help you learn to eat intuitively.

So, how does this healthy eating approach work?

Well, mostly by eating real, unprocessed food and eliminating processed food linked to inflammation, digestive issues, and immune derangements. Some of the foods allowed on this eating pattern include:

Foods on the forbidden list, on the other hand, include:

Bear in mind that Whole30 is pretty strict about the ingredients you need to eliminate, with no leeway for swaps and cheats days. That means absolutely no added sugar, not even honey, maple syrup, stevia, or monk fruit, for example. But given that this dietary approach is only 30 days long, this shouldn’t be difficult.

What’s the Difference Between Keto and Whole30?

There are a number of differences between keto vs Whole30. Below are major ones explained:

Focus on macros vs. food groups

The keto diet limits certain foods with the goal of reaching a specific macronutrient distribution that will put you in ketosis. Whole30 limits foods that are purported to be bad for health by raising glucose, insulin, and inflammation levels.

Followed correctly, keto will inevitably put you in ketosis. Whole30 may lower your blood glucose or insulin levels because it eliminates foods that elevate both. Both diets may lead to weight loss and better glycemic control.

The ketogenic diet as a search term yields over 3,000 results in PubMed. Whole30, on the other hand, yields none, and experts claim there have been no studies on the program as of today. This does not mean Whole30 does not work — just that we haven’t seen it being scientifically tested.

The ketogenic diet should be followed for at least a couple of weeks to have a full effect, and many see it as a long-term lifestyle change. Whole30 is meant to be followed for 30 days, after which time you gradually start reintroducing foods while sticking to some of Whole30’s principles.

There are, of course, many other disparities between the two, but the above examples can help you get the gist of each approach.

There’s a reason so many lump these two strategies together: they have similarities not seen in other diets.

For one, both are low-carb diets. Keto is so by definition, while Whole30 ends up being low in carbs because it limits certain high-carb foods. Researchers and even the American Diabetes Association note these diets can promote weight loss and metabolic health.

Another similarity is that neither approach places emphasis on calorie counting. Instead, their aim is for low-calorie intake to naturally result from following the diets.

Keto does this by affecting hunger hormones, leading to suppressed appetite. On top of that, it lowers the fat-storing hormone insulin. Whole30 may help reduce appetite because it can also lower insulin, but also because you’ll eat more filling nutrients like protein and fiber on this diet.

And finally, both diets come with promises of greater well-being and health.

While Keto and Whole30 are often clumped together under the low-carb diet category, these two approaches couldn’t be more different.

One focuses on restricting carbohydrates, while the other aims for clean eating. Keto puts the body in ketosis, and Whole30 helps you gain perspective on your eating habits. Another major difference is that keto has been extensively studied, while we’re yet to see Whole30 being tested.

Nonetheless, both diets have their fair share of followers claiming their respective diets have helped them lose weight or feel better. At the end of the day, one isn’t necessarily better than the other; your choice should boil down to personal preference and ability to follow through.