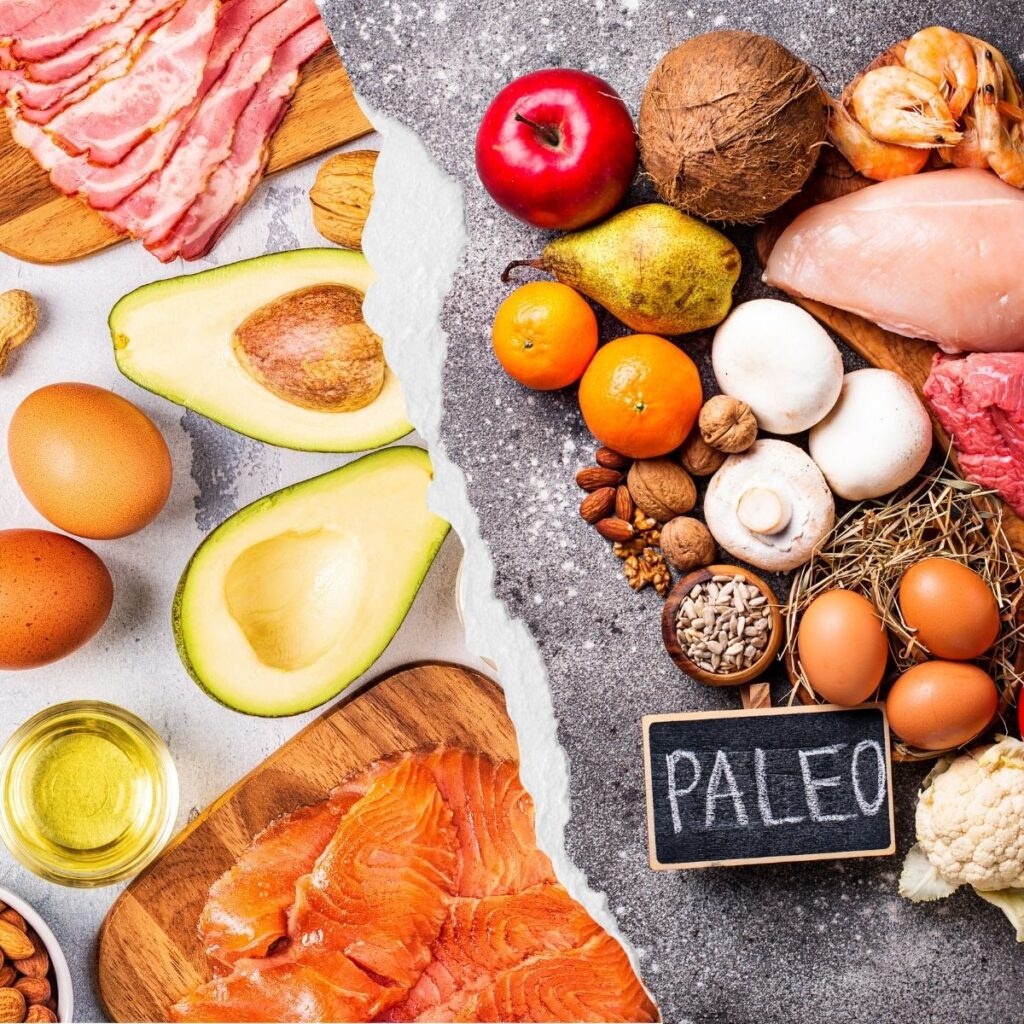 Over two decades ago, the most popular weight-loss diets were ones based on reducing fat intake. Today, the focus has shifted to a different macronutrient: carbohydrates.

This shift is what has contributed to the growing popularity of low-carb diets like keto and Paleo. Even though these two diets fall under the same “low-carb” umbrella, they have as many differences as they do similarities.

Knowing what sets them apart can help you decide which one of these two approaches is best for you.

With that said, let’s compare these two popular approaches before helping you make the final verdict. Bear in mind that the following lines refer to standard keto vs. paleo diets as we know them.

A type of low-carb diet, keto is formally called the ketogenic diet. The term “ketogenic” means to produce ketones, which are water-soluble molecules your body normally makes when it is in a fasted state. The purpose of these molecules is to replace glucose when it’s not available; just think of them as your body’s backup fuel.

The way keto “produces ketones” is by creating an energy crisis, similar to fasting, through severe carb restriction. Carb intake on this diet is typically 20-50g per day, which is done by excluding high-carb foods like:

In comparison, the Dietary Guidelines for Americans recommend eating around 130g of carbs per day.

Being on a low-carb diet like keto leads to drops in available glucose, and this means less energy for your cells. To keep with energy demands, the body then has no other option but to look for alternative fuel — fat! But your body does not use fat directly because fat burning uses too much oxygen. Instead, the body turns fat into more energy-efficient ketones.

When ketone levels start to rise on a keto diet and you get most of your energy from them, you’re in a metabolic state known as ketosis — the main goal of the keto diet.

The Paleolithic (Paleo) diet is also known as the caveman diet or the Stone-Age diet. The main objective of this diet is to mimic how preagricultural humans used to eat.

The argument for eating like our ancestors is that our modern diets — especially those that emerged after the Second Industrial Revolution — are incompatible with our genes. This incompatibility is the reason why we’re seeing a global increase in chronic diseases. Another reason is that the way modern-day food is produced leads to both “overnutrition” and “undernutrition.”

While not a low-carb diet by definition, Paleo does turn out to be low in carbs in practice. That is because some of the food groups it excludes are major sources of carbohydrates:

On the other hand, Paleo is based around grass-fed meat, wild-caught fish, eggs, some vegetables, most fruit, nuts, seeds, olives, honey, and unrefined vegetable oils. Eating this way is bound to lead to lower-than-usual carb intake. One randomized trial even found that the Paleo diet provided only 30% of total calories from carbohydrates. For reference, the IOM recommends that carbs provide 45-65% of your energy.

One of the biggest similarities between keto vs. Paleo is that both are (relatively) low in carb.

The Paleo diet usually provides less energy from carbs compared to Western diets. Although, whether this is true depends on how you formulate your diet. The keto diet, on the other hand, is by its very definition a low-carb diet. Put differently, a Paleo diet can be low in carbs but a keto diet has to be low in carbs to be considered such.

Other similarities of these two diets are:

The exclusion of many of the same food groups, such as grains, legumes, and refined sugar
Being based around similar food groups, like meat, eggs, nuts, and seeds
The exclusion of refined vegetable oils in favor of unrefined ones
Reduced intake of processed foods like chips, candy, and frozen meals

Of course, there are variations of both diets that don’t involve many of the above rules, for example, dirty keto and vegetarian Paleo.

Keto and Paleo have as many differences as they do resemblances. So, where does keto diverge from Paleo?

Keto and Paleo differ in these areas:

The keto diet began as an epilepsy treatment in the 1920s and evolved into a diet many now use for weight-loss and health. The concept of the Paleo diet started in the 1970s, but its popularity soared after The Paleo Diet: Lose Weight and Get Healthy by Eating the Foods You Were Designed to Eat by Loren Cordain was published in 2002.

As far as their approaches to nutrition go, the main focus on keto should be macronutrient intake, while the quality of food and food groups are important on Paleo.

And when speaking of their effects on metabolism, keto puts your body in ketosis, the Paleo diet does not. This is one of their biggest differences.

Which One Should I Choose?

Whether you should go for the keto vs. Paleo diet depends on your preferences, goals, but also on your health.

The keto diet is more difficult to follow because it involves careful monitoring of carb intake. If you don’t like or can’t stick to strict dietary rules, then Paleo may be more suitable for you.

Regarding keto vs. paleo for weight loss, the keto diet may have a greater advantage simply because it increases ketosis (aka fat burning). And when it comes to health, both diets can be a step up from unhealthy habits.

But if you’re someone with a history of pancreatitis, liver failure, disorders of fat metabolism, porphyrias, and carnitine deficiencies, you will have to avoid keto in particular. And if you’re taking diabetes medication, you will need to adjust your doses to avoid complications on both diets.

In any case, do speak to your doctor before making any changes to your diet. A medical professional is the best person to ask about diet safety and efficiency.