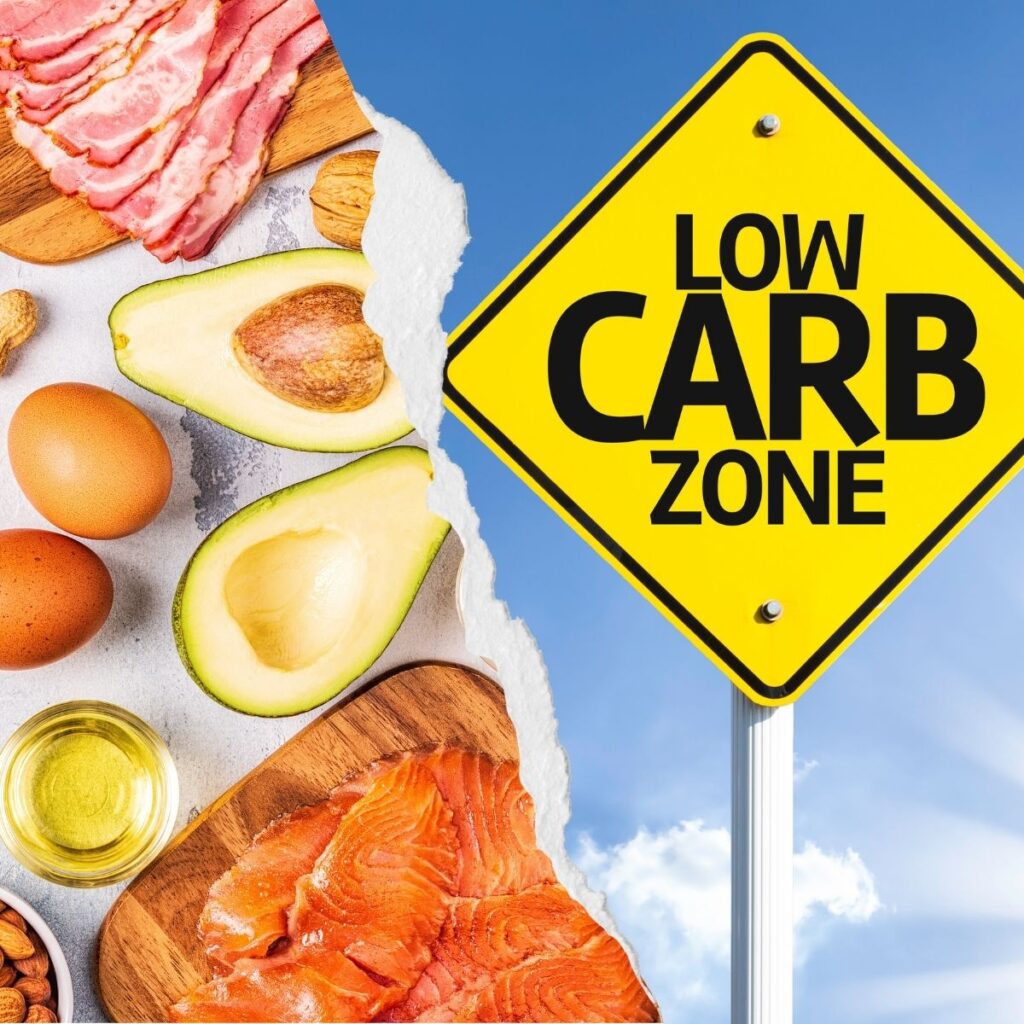 Keto vs. Low-Carb: is there any difference?

Keto and other low-carb diets all involve some level of carbohydrate restriction. People following these eating approaches will typically exclude many of the same foods as a result. Both approaches are also known to help with weight loss as well as metabolic health.

With so much in common, you’re probably wondering whether there are any differences between the two.

In short, yes! There are quite a few differences between keto vs. low-carb diets. These differences are found in their levels of carb restriction, their effect on metabolism, and degree of difficulty.

If you’ve been thinking about following a keto or a low-carb diet, you’ll want to learn more about each first. Below, we explain what each diet is and which unique benefits each provide to help you make the best choices.

What Are Low-Carb Diets?

Low-carbohydrate diets are diets that mainly involve eating fewer carbs than you normally do. There is no clear consensus on what makes a diet low-carb, but for simplicity’s sake, most stick to these definitions [1]:

For reference, the Institute of Medicine recommends carbs make up 45%-65% of your daily calories [2].

Low-carb diets have been around since the 1970s, but they’ve seen a surge in popularity over the past two decades after people became disillusioned with low-fat diets that dominated much of the 1980s and 90s [3]. Low-carb diets stem from the idea that lowering insulin by lowering your intake of carbohydrates produces weight loss and better metabolic health [1].

Examples of popular low-carb diets include the Atkins diet, the Dukan diet, the Paleo diet, and keto. All of these diets are known to exclude sugar, grains, fruit, and other high-carb food at some point. Some of these diets have carb restriction as their main goal, while others end up being low in carbs due to their composition.

What Is the Keto Diet?

The ketogenic (keto) diet is a type of very-low-carb diet.

Carb intake on keto is usually less than 10% of daily calories or around 20-50g per day. In fact, macronutrient distribution on this diet is its most important aspect, and it looks something like this:

What sets this diet apart from other low-carb diets is its ability to induce ketosis — a metabolic state in which you have higher than usual levels of ketones in your blood. Ketosis happens when your body does not have enough carbs (and glucose) to keep up with energy demands [4]. As a result, the body produces an alternative fuel by burning fat — ketones — from which keto got its name.

Researchers in the 1920s came up with keto as a treatment for epilepsy [5]. They drew on from previous research showing that fasting has anti-seizure action and that this effect was due to ketones. They needed to come up with a more convenient alternative and keto was born (both keto and fasting induce ketosis due to severe carb restriction).

With the growing popularity of low-carb diets, keto saw a resurgence as a weight-loss and metabolism-boosting approach over the past decade.

Keto vs. Low-Carb for Weight Loss

But what about keto vs. low-carb diets? Is one better or more effective than the other where weight loss is concerned?

One randomized clinical trial aimed to answer that exact question [8]. The trial involved 39 participants who completed the study and found that the greater the carb restriction, the greater the weight loss. Specifically, folks on the keto diet lost 9lbs after 12 weeks, while those on the low-carb diet and medium-carb diet lost 8lbs and 6lbs, respectively.

However, it’s important to note that similar studies in the past found that keto had no advantage over other low-carb diets for weight loss and that these diets were equally effective [9].

This means that whether one is more effective than the other for weight loss is still open to debate. But what we know for certain from these studies is that low-carb diets are easier to follow than keto diets.

The keto diet and other low-carb diets come with their unique set of health benefits.

While both approaches lower insulin levels, the keto diet takes things further by putting the body in ketosis [8]. Ketosis provides unique health benefits not seen with just insulin lowering like [10, 11]:

Ketones have antioxidant benefits and they boost mitochondria size and number [12]. This can help explain some of the above health benefits as metabolism and brain functioning both depend on these things.

However, lowering insulin with the help of any low-carb approach is just as beneficial for health. Health benefits that come from lowered insulin include [11]:

All low-carb approaches have their set of benefits and drawbacks. So this isn’t a matter of whether one is better than the other, but which approach is better for you.

If you want to lose weight quickly, then a keto diet can be more effective. But if you find strict dieting difficult, then a more moderate approach to carb restriction may be more suitable.

At the end of the day, keto vs. low-carb is a matter of personal preferences but also your health. Make sure to speak to your doctor first if you’re planning on going on a strict low-carb diet like keto. Otherwise, take things easy with a more moderate approach.