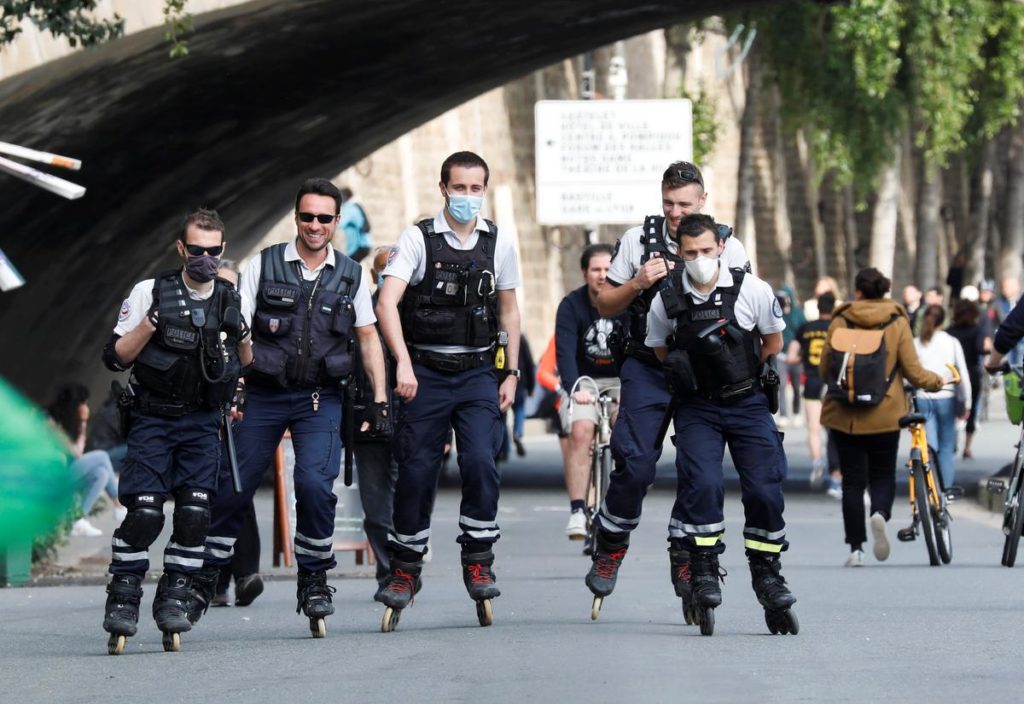 PARIS (Reuters) – France’s daily death toll from the new coronavirus dropped on Wednesday to 83 from 348 the day before, bringing the total number of dead there to 27,074 and putting it just behind Spain in terms of overall fatalities from the disease.

French police on rollerblades patrol along the banks of the Seine after France began a gradual end to a nationwide lockdown due to the coronavirus disease (COVID-19) in Paris, France, May 13, 2020. REUTERS/Charles Platiau

Three days after ending a 55-day lockdown, the number of additional confirmed cases was also lower than on Tuesday, easing fears of a new wave of infections.

France briefly overtook Spain on Tuesday as the country with the world’s fourth-highest number of COVID-19 fatalities, but its southern neighbour earlier on Wednesday reported that its death toll had risen overnight to 27,104.

The United States has lost more people to the virus than anywhere else with 82,030 fatalities, while Britain has officially recorded 33,186 deaths and Italy 31,106, based on the latest figures.

France’s health ministry said in a statement that the number of confirmed coronavirus cases had increased by 507 to 140,734, a smaller rise than the 708 cases logged a day earlier.

Including 37,326 suspected cases in nursing homes, down 672, the total number of confirmed and suspected infections dropped by 0.3% to 177,700, putting France seventh worldwide by that measure behind Brazil.

It was the first decline in this measure since April 29, when a previous adjustment led to a 1.5% fall.

Nursing homes not only registered a fall in probable cases but also 15 fewer deaths than on Tuesday, taking the total to 9,973.

A health ministry spokesman told Reuters these decreases were due to corrections made in databases of several nursing homes in the Paris region.

The number of people in hospital with coronavirus infection fell again to 21,071 from 21,595 on Tuesday, continuing an uninterrupted downward trend now entering its fifth week.

The number of people in intensive care also continued a similar downtrend and fell by 114 or 4.7% to 2,428.