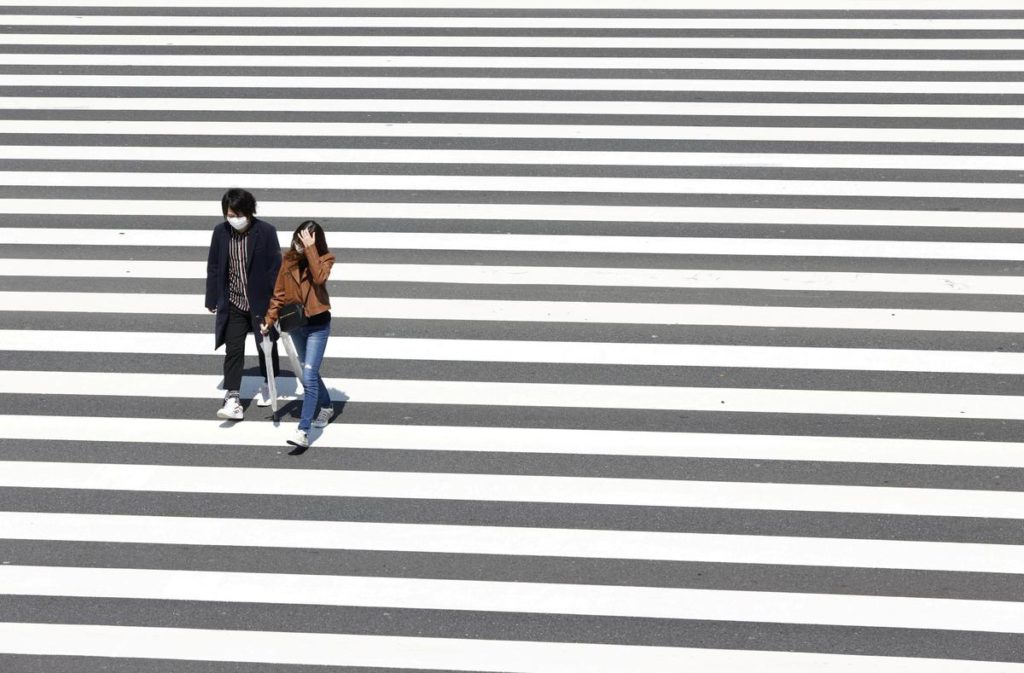 Factbox: Latest on the spread of the coronavirus around the world

(Reuters) – More than 1.8 million people have been reported to be infected by the novel coronavirus globally and 113,849 have died, according to a Reuters tally, as of 0200 GMT.

People walk on the crosswalk, downtown, which has less than usual passersby after the state of emergency was announced, following the coronavirus disease (COVID-19) outbreak, in Shinjuku City, Tokyo, Japan, in this photo taken by Kyodo April 11, 2020. Mandatory credit Kyodo via REUTERS

** For an interactive graphic tracking the global spread, open tmsnrt.rs/3aIRuz7 in an external browser.

** U.S.-focused tracker with state-by-state and county map, open tmsnrt.rs/2w7hX9T in an external browser.

** Americans spent Easter Sunday on lockdown as the U.S. toll from the pandemic surpassed 21,300 deaths and more than half a million confirmed cases.

** The United States needs to ramp up testing for the coronavirus as the White House considers when and how to lift stay-at-home restrictions and lockdowns, U.S. health experts said.

** British Prime Minister Boris Johnson left hospital and thanked staff for saving his life from COVID-19, but his government was forced to defend its response to the pandemic as the national death toll passed 10,000.

** Pope Francis called for global solidarity in fighting the pandemic and its economic fallout, urging the relaxation of international sanctions, debt relief for poor nations and ceasefires in all conflicts.

** Spanish Prime Minister Pedro Sanchez said any further loosening of the country’s lockdown restrictions would depend on more progress in the fight against the coronavirus, a day before some companies plan to reopen their doors.

** The death toll in France rose at a slightly slower pace on Sunday than a day earlier, the French public health authority said, adding that the lockdown was producing its first effects.

** Russia on Sunday reported 2,186 new cases, the largest daily increase since the start of the outbreak. The number of cases reached 15,770 as of April 12, while deaths rose to 130.

ASIA AND THE PACIFIC

** China reported 108 new cases on Sunday, the highest in nearly six weeks, bringing the total cases in mainland China at 82,160, while the death toll rose by two to 3,341.

** Chinese cities near the border with Russia said they would tighten border controls and quarantine measures on arrivals from abroad after the number of imported cases of COVID-19 hit a record high.

** Indonesia imposed curbs on public transport ahead of the annual exodus to home villages that marks the end of the Muslim fasting month, seeking to slow the spread of the coronavirus in the world’s fourth most populous country.

** India said its hospital network is adequately prepared to tackle the spread of the virus, with over 100,000 beds ready to cater to a potential surge in patient numbers.

** Japanese Prime Minister Shinzo Abe prompted an angry response from some Twitter users after sharing a video of himself lounging on a sofa with his dog, drinking tea and reading, along with a message telling people to stay at home.

** A former Israeli chief rabbi died after contracting the coronavirus, Prime Minister Benjamin Netanyahu said, in what is the country’s highest-profile death from the pandemic.

** Thousands of displaced Syrians have begun moving back to their homes in war-torn Idlib province despite the risk of renewed conflict, some driven by fear that the coronavirus could wreak havoc on crowded camps near the Turkish border.

** African ambassadors in China have written to the country’s foreign minister over what they call discrimination against Africans as the country seeks to prevent a resurgence of the coronavirus.

** South Africa, which banned the sale of all alcohol and cigarettes under a lockdown that triggered a wave of lootings of liquor shops, said on Sunday it had caught police officers who were complicit in illegal alcohol sales.

** Global shares fell as investors braced for more signs of economic damage from the pandemic, although a landmark deal by OPEC and its allies to slash output helped oil prices climb in volatile trade. [MKTS/GLOB]

** The U.S. economic recovery will likely be a “long, hard road” in which some parts of the economy will periodically shut down and restart, Minneapolis Federal Reserve Bank President Neel Kashkari said on Sunday.

** Smithfield Foods, the world’s biggest pork processor, said it will shut a U.S. plant indefinitely due to a rash of coronavirus cases among employees and warned the country was moving “perilously close to the edge” in supplies for grocers.

** India and other South Asian countries are likely to record their worst growth performance in four decades this year due to the pandemic, the World Bank said..

** JPMorgan Chase & Co (JPM.N), the largest lender in the United States by assets, is raising borrowing standards this week for most new home loans as the bank moves to mitigate lending risk stemming from the coronavirus disruption.