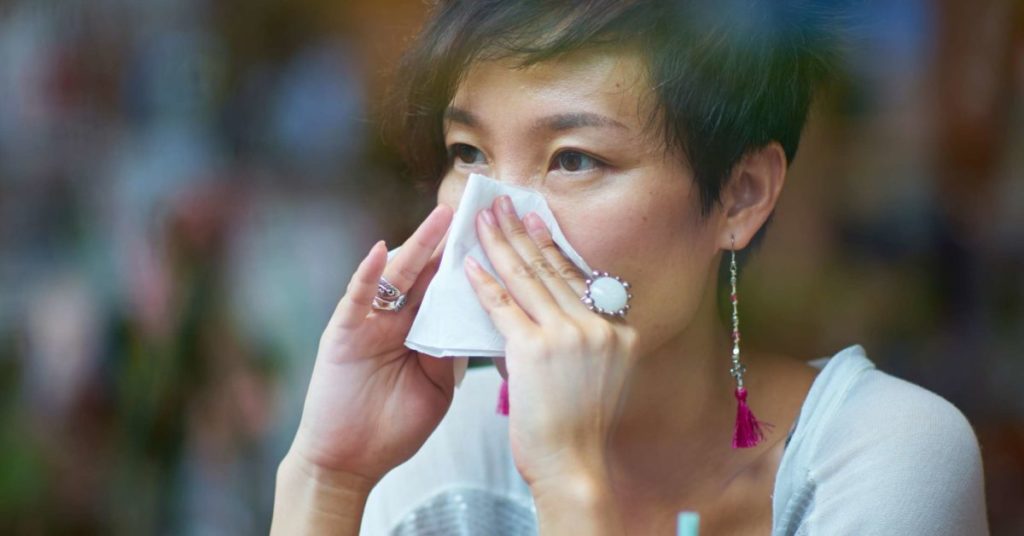 The mucous lining of the sinuses traps dust, germs, and pollutants. When the sinuses become inflamed, the mucus cannot flow normally. Tissue swelling traps mucus in the sinuses, which can allow germs to grow.

In ethmoid sinusitis, this inflammation affects the ethmoid sinuses. People have four groups of sinuses, each of which can become inflamed:

The causes of ethmoid sinusitis will typically be similar to those of other forms of sinusitis. They may include:

a viral infection, including the common coldseasonal allergiessmoking or secondhand smokea weakened immune systemthe narrowing of the nasal passages due to nasal polyps

A person with ethmoid sinusitis may experience many symptoms common to all sinus infections. According to the Centers for Disease Control and Prevention (CDC), these can include:

In addition, they may experience symptoms specific to ethmoid sinusitis because of the position of these sinuses near the eyes. These symptoms include a swollen, red, or painful eye.

Sinusitis can either be acute, meaning that a person has it for only a short time, or chronic, where it lasts for more than 12 weeks, even with treatment.

As with other types of sinusitis, the most common cause of ethmoid sinusitis is a virus, such as the common cold. In these cases, it will often resolve without a person needing to see a doctor.

According to the CDC, a person should speak to a doctor if:

When diagnosing ethmoid sinusitis, a doctor will ask the person how they have been feeling and carry out a physical examination to look for the characteristic signs and symptoms of sinusitis. These may include:

congestion, obstruction, or blockage in and around the nosesignificant amounts of mucus in the nosefacial pressure or pain

The doctor may also look into the person’s nose, throat, or ears for visible signs of inflammation. After this examination, if the doctor is not certain about the correct diagnosis, they may also insert a thin tube with a light and a camera on the end into the nose to examine the sinus tissues.

Occasionally, a doctor may recommend an X-ray or a CT scan to determine the likely cause of the person’s symptoms.

According to the CDC, a person’s sinus infection will usually get better on its own. However, if a doctor suspects a bacterial infection, they may prescribe antibiotics.

The doctor may also prescribe:

The CDC also note that home remedies may help some people. They recommend putting a warm compress over the affected area or breathing in steam from a bowl of hot water or a shower.

Read more about how to treat sinus infections here.

People can often prevent sinus infections by taking steps to stay healthy and to help others stay healthy. These include:

practicing good hand hygienegetting the recommended vaccines, such as the flu and pneumococcal vaccinesavoiding contact with people who currently have an upper respiratory infection, including a coldavoiding smoke and secondhand smokeusing a clean humidifier at home to add moisture to the air

People may wish to see their doctor for more information about the causes, treatment, and prevention of sinusitis, particularly if the condition is chronic.