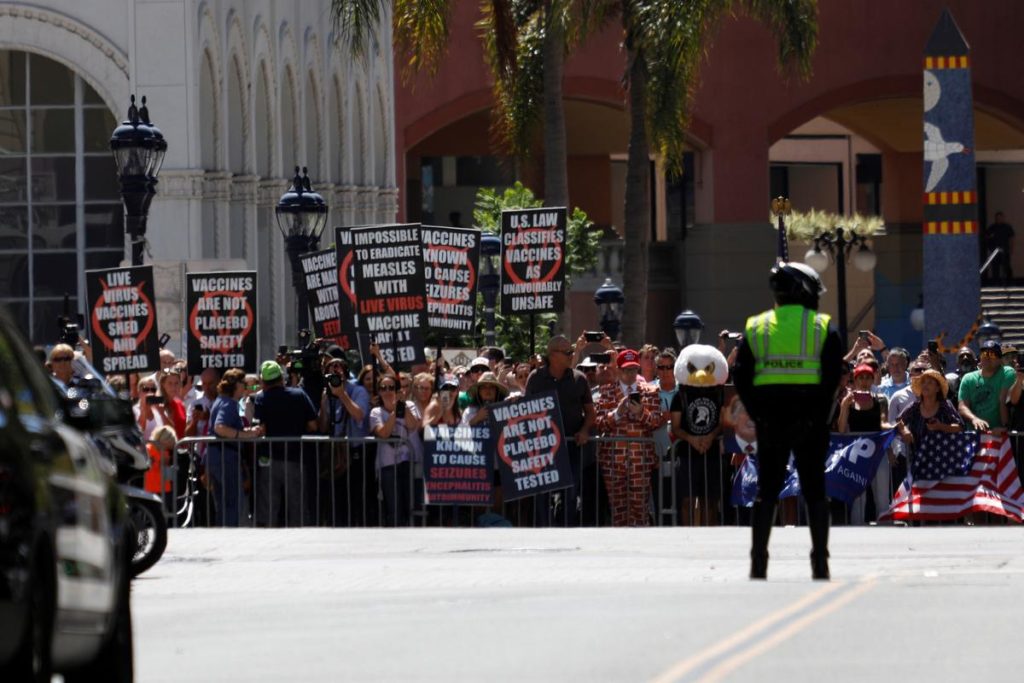 Could the new coronavirus weaken ‘anti-vaxxers’?

LISBON (Reuters) – An American mother-of-three is a long-time member of “anti-vaxxer” groups online: a small but vocal global community that believes vaccines are a dangerous con and refuse to immunize themselves or their children.

But COVID-19 is shaking her views. The woman who would identify herself only as Stephanie, citing a fear of reprisals from committed anti-vaxxers, says she is now 50:50 on taking a vaccine should one be discovered for the respiratory disease caused by the new coronavirus.

“I’ve definitely thought about it,” she told Reuters by phone from the United States, also expressing frustration at what she considers the anti-vax community’s downplaying of the pandemic’s seriousness. “We’re all being affected by this virus, schools closing, young people in hospital, and they still say it’s a hoax.”

As the world’s scientists and pharmaceutical companies seek a cure for the coronavirus, other anti-vaxxers are gearing up for a fight against any potential new vaccine.

“Refuse, demonstrate,” said a Briton on Facebook in response to a post asking people how they would react if a vaccine was made mandatory.

But some virologists say the quest for a vaccine is so widely supported that resistance will be eroded.

The latest national surveys by pollster ORB International for the Vaccine Confidence Project (VCP), which monitors attitudes to immunisation, appear to support this idea.

In France, where a 2018 poll showed one in three people did not view vaccines as safe, just 18% would refuse a coronavirus vaccine now, according to the VCP poll of around 1,000 people on March 18, a day after France locked down.

In Australia, the VCP’s figure was also 7%, while Britain, where about 2,000 people were polled, and Austria registered 5% opposition in polls there a week later.

“If a vaccine were made available tomorrow, everyone would jump to get it,” said Laurent-Henri Vignaud, who co-authored a history of France’s anti-vax movement.

That view was challenged by Mary Holland, vice-chair of American non-profit group Children’s Health Defense, which is critical of vaccination in the United States.

“I WILL NOT BE INJECTED WITH ANYTHING”

Although the term “anti-vax” is sometimes associated with conspiracy theories, many people are simply concerned about side-effects or industry ethics.

Globally, one person in five does not view vaccines as safe or is unsure, according to a 2018 survey by the Wellcome Trust health fund. reut.rs/2JTb27q

In China, where the COVID-19 disease caused by the novel coronavirus originated, surveys by VCP researchers show safety is an important cause of concern. Several scandals eroded trust, including in 2018 when a unit of China’s vaccine maker Changsheng Bio-technology Co Ltd was heavily fined for falsifying data for a rabies vaccine. The company said it was “deeply sorry” for the incident.

Online discussions tracked by Reuters – including closed Facebook pages with more than 200,000 members, Twitter feeds such as the Children’s Health Defense and YouTube videos totalling over 700,000 views – showed considerable mistrust that a rushed vaccine would be improperly tested.

VCP director Heidi Larson said that was also the main reason for concern around the vaccine against the H1N1 swine flu pandemic in 2009.

A quickly produced swine flu vaccine in 1976 led to about one in 100,000 people developing Guillain-Barre syndrome, a paralyzing immune-system disorder, according to the Center for Disease Control and Prevention (CDC).

Some 115 coronavirus vaccine candidates are being developed by institutes and drugmakers, according to the Coalition for Epidemic Preparedness Innovation, a global alliance financing and coordinating the development of vaccines.

“I will not be injected with anything, especially a fast-tracked vaccine,” added American Vicki Barneck, 67, who believes a strong immune system is enough to combat the disease.

Holland, of the Children’s Health Defense, said: “Some react fine to vaccines, others are paralysed or killed.”

However, a 2015 paper by CDC epidemiologists said “multiple studies and scientific reviews have found no association between vaccination and deaths except in rare cases.”

“HUNGRY FOR A VACCINE”

The VCP is running an 18-month study tracking conversation online about the coronavirus and conducting global polls to measure attitudes towards social distancing, isolation, hand-washing and anticipating a vaccine.

From analysing more than 3 million posts a day between January and mid-March 2020, director Dr Heidi Larson said the vast majority were eager for a treatment, fast.

“People are hungry for a vaccine,” she said.

In Italy, which has been hit badly by COVID-19, the anti-vax movement has “virtually disappeared” in the discussion on the coronavirus, according to virologist Dr Roberto Burioni.

For a coronavirus vaccine to be effective, wide uptake and annual vaccination is likely to be required, said George Kassianos, immunisation lead at the Royal College of General Practitioners in London.

There is also the question of how to distribute fast enough to people lining up for the vaccine.

“By the time you get to the anti-vaxxers, they’ll have trouble getting it even if they wanted to.”