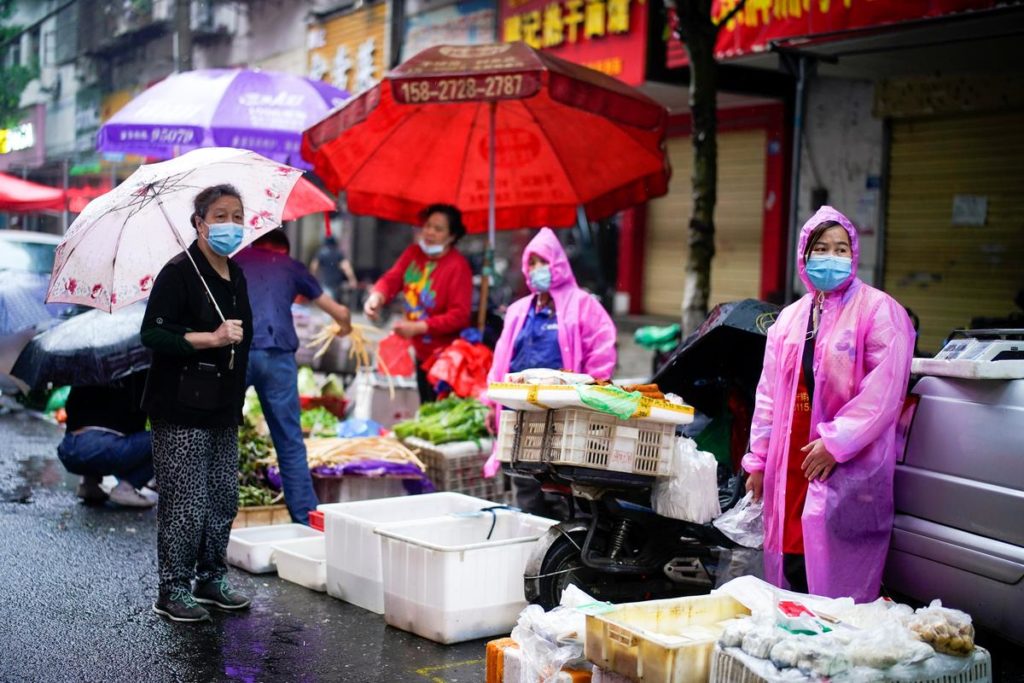 SHANGHAI/BEIJING (Reuters) – Wuhan, the original epicentre of the new coronavirus outbreak in China, has tested over 3 million residents for the pathogen since April, and will now focus its testing efforts on the rest of its 11 million population, according to state media.

People wearing protective face masks are seen at a street market in Wuhan, the Chinese city hit the hardest by the coronavirus disease (COVID-19) outbreak, in the Hubei province, China, May 14, 2020. REUTERS/Aly Song

Wuhan will conduct tests on everyone in the city, with the goal of getting a clear number of asymptomatic cases as businesses and schools reopen, the official Xinhua News Agency reported late Thursday.

The priority will be residents who have not been tested before, people living in residential compounds that had previous cases of the virus, as well as old or densely populated estates, Xinhua said, citing a Wuhan government meeting.

Wuhan reported a cluster of infections over the weekend, the first since a virtual lockdown on the city was lifted on April 8, raising fears of a second wave. The latest infections were previously asymptomatic cases, people who had the virus but showed no symptoms such as a fever.

Reuters, citing an internal document to district officials, reported on May 11 that the city planned to conduct the campaign of city-wide nucleic acid tests over 10 days.

Wuhan has conducted 1.79 million tests from April 1 to May 13, according to Reuters calculations based on daily reports published by the city’s health commission.

The official test number for May 14 will be published on Friday.

Recently, Wuhan has detected several to more than a dozen asymptomatic infections every day. Although those people are all treated in isolation, they still spark concern in the society, Xinhua said.

Some experts say the mass testing is unprecedented in scale, and shows the level of concern. Others warn on potential testing errors due to the sheer size of the sampling.

On Friday, China reported four new confirmed cases in the mainland for May 14, up from three cases a day earlier, the National Health Commission said in a statement on Friday.

All of the new cases were locally transmitted and the number of new asymptomatic cases fell slightly to 11 from 12 a day earlier.

The total number of confirmed cases in mainland China now stands at 82,933 while the death toll remained unchanged at 4,633.

China does not include asymptomatic virus carriers in its tally of confirmed cases. It also does not disclose the overall number of asymptomatic cases in the country.