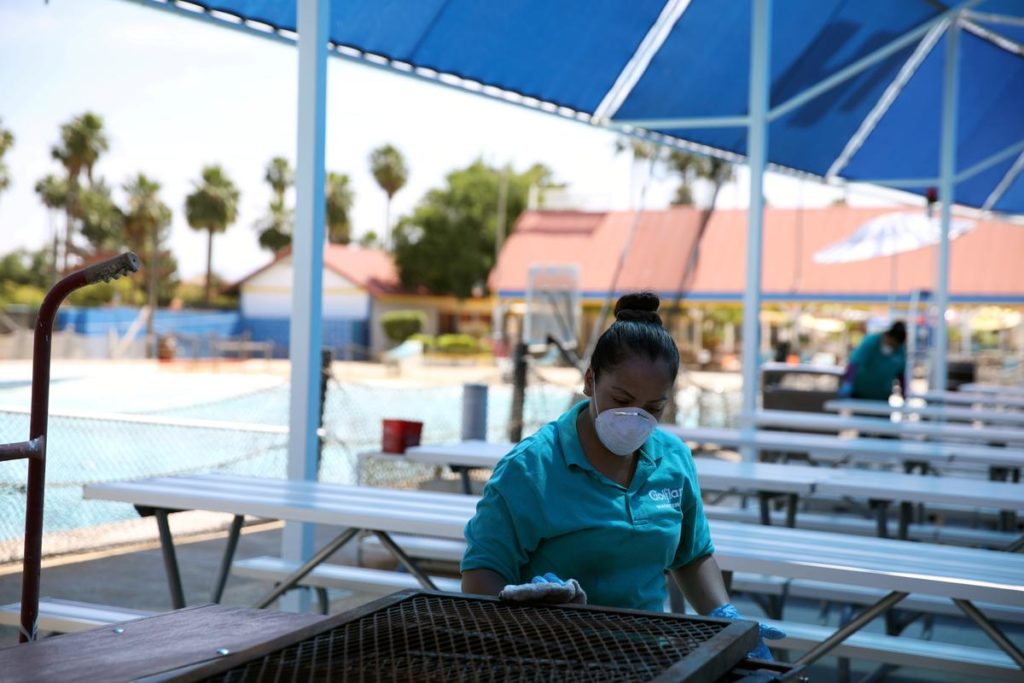 SACRAMENTO, Calif. (Reuters) – Coronavirus cases and hospitalizations are spiking in parts of California and the U.S. Southwest, prompting Arizona to reactivate its emergency plan for medical facilities and California to place counties where half its population lives on a watch list.

The uptick in cases, which could lead authorities to reimpose or tighten public health restrictions aimed at slowing the virus’ spread, complicates efforts to reopen the U.S. economy, which has been devastated by shelter-at-home rules.

New Jersey, one of the states hit hardest by the pandemic, with over 12,000 deaths, lifted its stay-at-home order on Tuesday.

“Many of the cases that are showing up in hospitals are linked to gatherings that are taking place in homes – birthday parties and funerals,” said Olivia Kasirye, public health director of Sacramento County, one of the nine counties on the state watch list that may eventually require them to roll back reopening efforts.

Arizona was among the first states to reopen in mid-May and its cases have increased 115% since then, leading a former state health chief to warn that a new stay-at-home order or field hospitals may be needed.

On Tuesday, 21 U.S. states reported weekly increases in new cases of COVID-19, the respiratory disease caused by the novel coronavirus. Arizona, Utah and New Mexico all posted rises of 40% or higher for the week ended Sunday, compared with the prior seven days, according to a Reuters analysis.

Some of the new cases are linked to better testing. But many stem from loosened public health restrictions that have allowed people to gather in groups and go inside stores to shop, said public health officers in two California counties.

Health officials believe other cases have been passed along by people not following social-distancing recommendations. It is too soon to see whether cases will also spike after protests swept the country over the May 25 death in Minneapolis police custody of George Floyd, an African-American man, officials said.

The number of new infections in the first week of June rose 3% in the United States, the first increase after five weeks of declines, according to an analysis of data from the COVID Tracking Project, a volunteer-run effort to track the outbreak.

But pressure to reopen economies is great, and states continued to lift coronavirus-related restrictions on Tuesday.

New Jersey Governor Phil Murphy said indoor crowds such as those attending religious services in churches, synagogues and mosques may include up to 50 people and outdoor gatherings could swell to 100 people.

In Washington state, the site of one of the earliest outbreaks of COVID-19, Governor Jay Inslee said nannies, housekeepers and personal chefs could go back to work, and people from different households could ride in the same golf cart.

University of Washington researchers estimated on Monday that 145,728 people could die of COVID-19 in the United States by August, raising their forecast by over 5,000 fatalities in a matter of days. The model changes as researchers take fresh account of people’s mobility as stay-at-home orders change.

For a graphic on Tracking the novel coronavirus in the U.S.:

For a World-focused tracker with country-by-country: