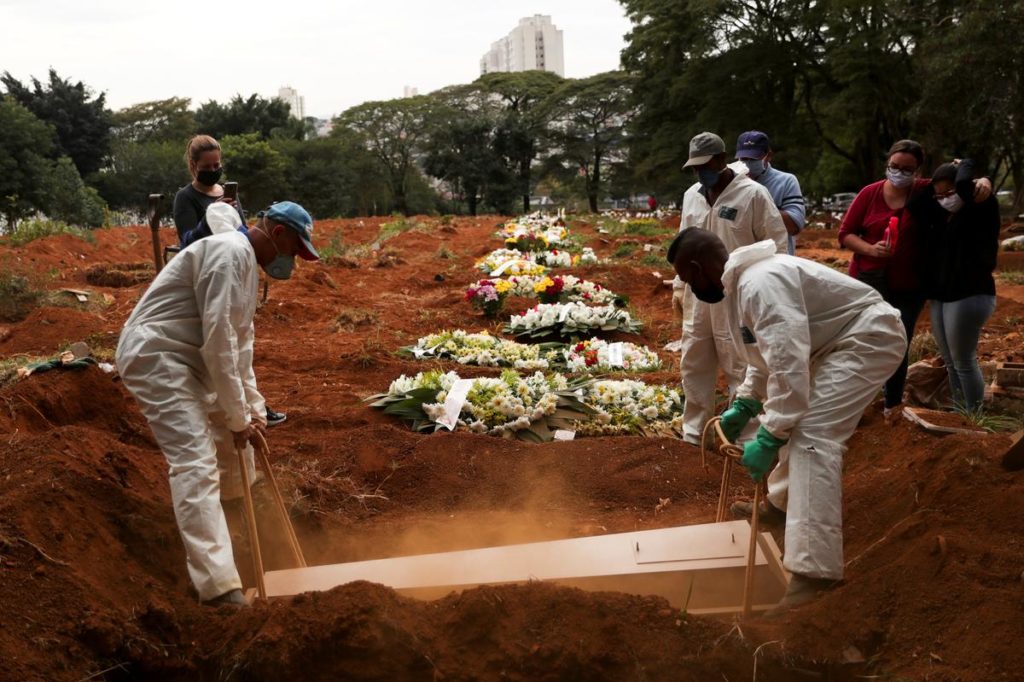 BRASILIA (Reuters) – Brazil registered a record number of new cases of the novel coronavirus on Wednesday, surpassing France’s tally to become the sixth-worst hit country, as the disease sends the economy toward its worst year since at least 1900.

The government confirmed 11,385 new cases in the last 24 hours, bringing its total count to 188,974 cases of the coronavirus since the outbreak began. Early on Wednesday, France revised its total number of confirmed and suspected cases down 0.3% to 177,700.

The pandemic has battered Brazil’s economy as residents shelter at home and many state and local governments instructed most businesses to close to slow the spread of the virus.

Brazilian President Jair Bolsonaro has locked horns with state governors for weeks over the lockdowns, saying they are causing more damage through lost jobs than the disease itself.

On Wednesday, the economy ministry predicted the Brazilian economy would contract 4.7% in 2020, the biggest annual fall since records began more than a century ago.

“It will reach the point where hungry people take to the streets,” Bolsonaro said on Wednesday.

He escalated the fight this week by declaring gyms and beauty salons as “essential” services that can open for business, threatening legal action against local governments that don’t comply.

Sao Paulo, Brazil’s most populous state and with the most cases of the virus, will not comply with Bolsonaro’s decree, Governor Joao Doria said on Wednesday, echoing comments made by at least 10 other governors.

The five countries that have registered more infections than Brazil are the United States, Spain, Russia, the United Kingdom and Italy.

Brazil recorded 749 new deaths from coronavirus on Wednesday, bringing the overall toll to 13,149.