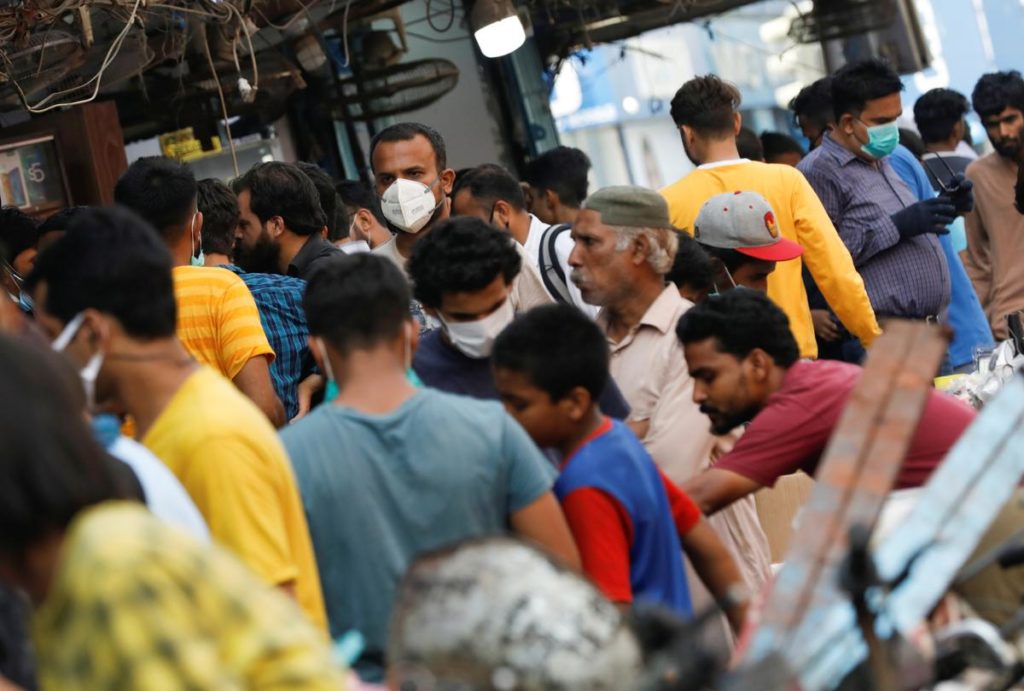 ISLAMABAD/ISTANBUL (Reuters) – Four weeks ago, with its most important festival coming up and millions of people facing starvation as economic activity dwindled, Pakistan lifted a two-month-long coronavirus lockdown.

FILE PHOTO: A man wearing a protective face mask walks amidst the rush of people outside an electronics market, after Pakistan started easing the lockdown restrictions, as the outbreak of the coronavirus disease (COVID-19) continues, in Karachi, Pakistan June 4, 2020. REUTERS/Akhtar Soomro

Prime Minister Imran Khan has said despite rising infections and deaths, the country would need to learn to “live with” the virus to avert pushing tens of millions living on daily wages into destitution.

To be sure, testing rates have also increased. But of those tested, the daily average of positive results climbed from on average 11.5% in the three weeks before the lockdown was lifted, to 15.4% on average in the subsequent three weeks. The ratio is around 23% this week, according to the data.

Pakistan has officially identified over 80,000 cases of COVID-19, with 1,770 confirmed deaths.

“Those numbers are concerning, since they do suggest there may still be widespread transmission in certain parts of the country,” said Claire Standley, assistant research professor at the Department of International Health at Georgetown University.

Experts say measures that could curb cases – like limits on religious gatherings and crowded shopping areas and emphasising social distancing – should be reinstated and some doctors are raising the alarm.

According to a letter seen by Reuters, a committee of experts backed by the local health department in Pakistan’s most populous province, Punjab, told the provincial government the lockdown needed to continue. The letter said random testing suggested more than 670,000 people in the provincial capital Lahore had likely contracted the virus, many of them asymptomatic.

The Punjab Health Minister Yasmeen Rashid said the letter had not been disregarded, but set aside in light of a Supreme Court decision that lockdowns should be lifted.

Most hospitals in Lahore are now full and are sending cases to Mayo Hospital, a public facility with more than 400 beds dedicated to COVID-19 cases, said Salman Kazmi, general secretary of the Young Doctor’s Association, who is treating coronavirus patients there.

Asad Aslam, the CEO of Mayo, however disputed claims that Lahore hospitals were saturated. “We can handle further burden of patients,” he said.

Pakistan lifted its lockdown on May 9, about two weeks before the Eid al-Fitr festival that marks the end of the Islamic holy month of Ramadan and is celebrated with family gatherings and feasting. Transport and most businesses have re-opened but cinemas, theatres and schools remain closed.

There has been growing debate among experts globally on whether populous developing nations can afford comprehensive social distancing measures to contain the coronavirus while avoiding economic ruin.

Some officials have suggested “herd immunity” could contain the virus, a situation where enough people in a population have developed immunity to an infection to be able to effectively stop that disease from spreading. However, the World Health Organization has warned countries that have “lax measures” in place against counting on herd immunity to halt the spread of COVID-19.

“The Pakistan government is setting itself up for a huge gamble but it’s also a test case for herd immunity because South Asia has no other choice,” a senior European Union official who oversees South Asia told Reuters.

Yet even those advocating rolling back strict lockdowns in developing nations are alarmed at the teeming crowds in Pakistan’s streets, shopping malls and mosques, the ramping up of domestic flights, and the movement of millions of people for the Eid holiday.

“It’s not about this dichotomy between complete lockdown and fully open,” Ahmed Mushfiq Mobarak, a professor of economics at Yale University, told Reuters.

He said a smarter strategy would be to allow people out for core economic and public health activities, rather than a total relaxation of rules.

“There should still be complete bans on religious gatherings and social gatherings…those are things for which we need to see much better leadership,” he said.