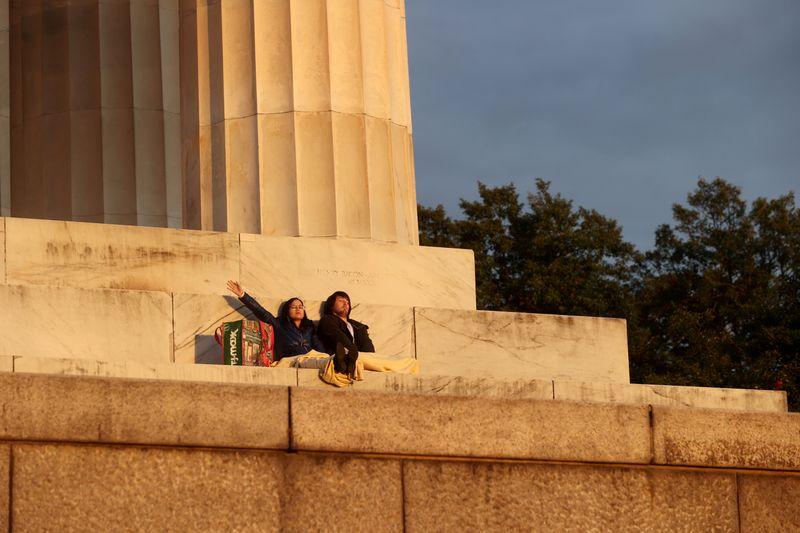 (Reuters) – Americans spent Sunday on lockdown as the U.S. toll from the novel coronavirus pandemic surpassed 20,500 deaths and more than half a million confirmed cases over the Easter weekend.

A young couple pray at sunrise on the steps at the Lincoln Memorial during the coronavirus disease (COVID-19) outbreak, where normally thousands of Christians would gather for worship at Easter sunrise, in Washington, U.S. April 12, 2020. REUTERS/Jonathan Ernst

With most of the country under stay-at-home orders to curb the spread of the disease, many turned to online church services to mark the holiest day in the Christian calendar.

“Future generations will look back on this as the long Lent of 2020, a time when disease and death suddenly darkened the whole earth,” Archbishop Jose Gomez of Los Angeles wrote to priests and parishioners nationwide, urging them to hold steadfast. “Our churches may be closed but Christ is not quarantined and his Gospel is not in chains.”

The United States has seen its highest death tolls to date from the COVID-19 disease caused by the coronavirus, with roughly 2,000 deaths a day reported for the last four days in a row, the largest number in and around New York City. Even that is viewed as understated, as New York is still figuring out how best to include a surge in deaths at home in its official statistics. (Graphic: tmsnrt.rs/2w7hX9T)

As the death toll has mounted, President Donald Trump mulled over when the country might begin to see a return to normality.

His administration sees May 1 as a target date for relaxing the stay-at-home restrictions, Food and Drug Administration Commissioner Stephen Hahn said on Sunday. But he cautioned that it was still too early to say that target would be met.

“We see light at the end of the tunnel,” Hahn told ABC’s “This Week,” adding, “Public safety and the welfare of the American people has to come first. That has to ultimately drive these decisions”

The top U.S. infectious disease expert said he was cautiously optimistic that some of the country is starting to see a turnaround in the fight against the outbreak.

Dr. Anthony Fauci pointed to the New York metropolitan area, which had its highest daily death toll last week alongside a decrease in hospitalizations, intensive care admissions and the need to intubate critically ill patients.

“Not only is it flat, it’s starting to turn the corner,” Fauci said on Sunday on CNN’s “State of the Union.”

“Once you turn that corner, hopefully you’ll see a very sharp decline and then you can start thinking about how we can keep it that way and prevent it from resurging,” he said.

The Trump administration renewed talk of quickly reopening the economy after an influential university research model cut its U.S. mortality forecasts to 60,000 deaths by Aug. 4, down from at least 100,000, assuming social-distancing measures stay.

However, new government data shows a summer surge in infections if stay-at-home orders are lifted after only 30 days, according to projections first reported by the New York Times and confirmed by a Department of Homeland Security official.