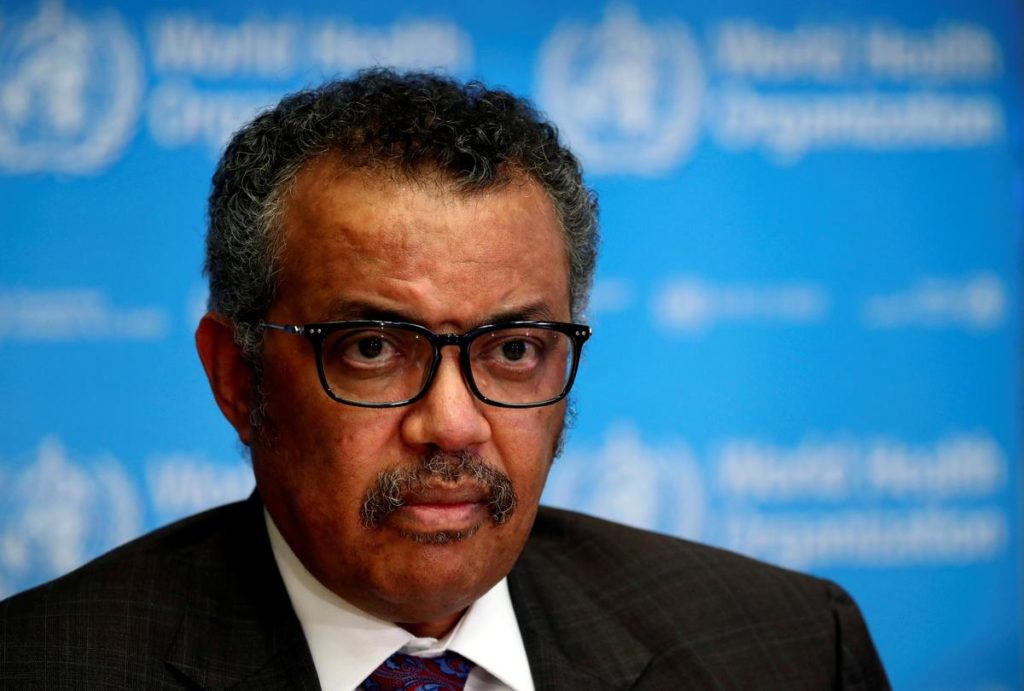 WHO warns against rushed end to coronavirus lockdowns

ZURICH/GENEVA (Reuters) – The World Health Organization (WHO) warned on Wednesday that countries emerging from restrictions to halt the new coronavirus must proceed “extremely carefully” or risk a rapid rise in new cases.

FILE PHOTO: Director General of the World Health Organization (WHO) Tedros Adhanom Ghebreyesus attends a news conference on the situation of the coronavirus (COVID-2019), in Geneva, Switzerland, February 28, 2020. REUTERS/Denis Balibouse/

Director-General Tedros Adhanom Ghebreyesus said countries needed to ensure they had adequate measures to control the spread of the COVID-19 respiratory disease like tracking systems and quarantine provision.

“The risk of returning to lockdown remains very real if countries do not manage the transition extremely carefully and in a phased approach,” he said at a virtual briefing in Geneva.

WHO epidemiologist Maria Van Kerkhove supported his concerns about the disease which has infected 3.71 million globally and killed more than 258,000 people, according to a Reuters tally.

“If lockdown measures are lifted too quickly, the virus can take off,” Van Kerkhove told the briefing.

The eurozone economy will contract by a record 7.7% this year because of the pandemic, while U.S. private employers laid off 20.2 million workers last month as business shut their doors.

Some countries, like Germany, Spain and Italy have started to relax restrictions, while the U.S. President Trump has said his focus is on opening up the country again.

Soccer authorities have also started to consider how they can salvage interrupted competitions, with Germany’s Bundesliga getting permission to restart later this month.

WHO official Mike Ryan said it was up to governments and sporting federations to decide how and when to restart, adding the U.N. organisaton would offer risk management advice if needed.

Tedros, who has come under fire mainly from the Trump administration for his handling of the outbreak, said that he would conduct an assessment of the WHO’s actions when the pandemic recedes.

“While the fire is raging I think our focus should not be divided,” he said.

Tedros also defended the WHO’s record on warning about the potential for human-to-human transmission of the new coronavirus, saying it informed the world in the first half of January.

The Geneva-based body has been accused of being “China- centric” by top donor the United States which has cut off funding to the body.

U.S. Secretary of State Mike Pompeo renewed his criticism on China on Wednesday, blaming the country for the deaths the outbreak has caused and demanding Beijing share information about the outbreak.

The WHO, which is preparing another mission to China to discover the animal origin of the virus, treated the country no differently to any of its 194 members, Tedros said.

“The rule we have in WHO and other UN agencies is that when a member state reports we post as is,” Tedros said.

“The most important thing is our guidance before, during and after 14 January included the likelihood of human to human transmission that helped countries to prepare, he added. “This is the whole truth.”