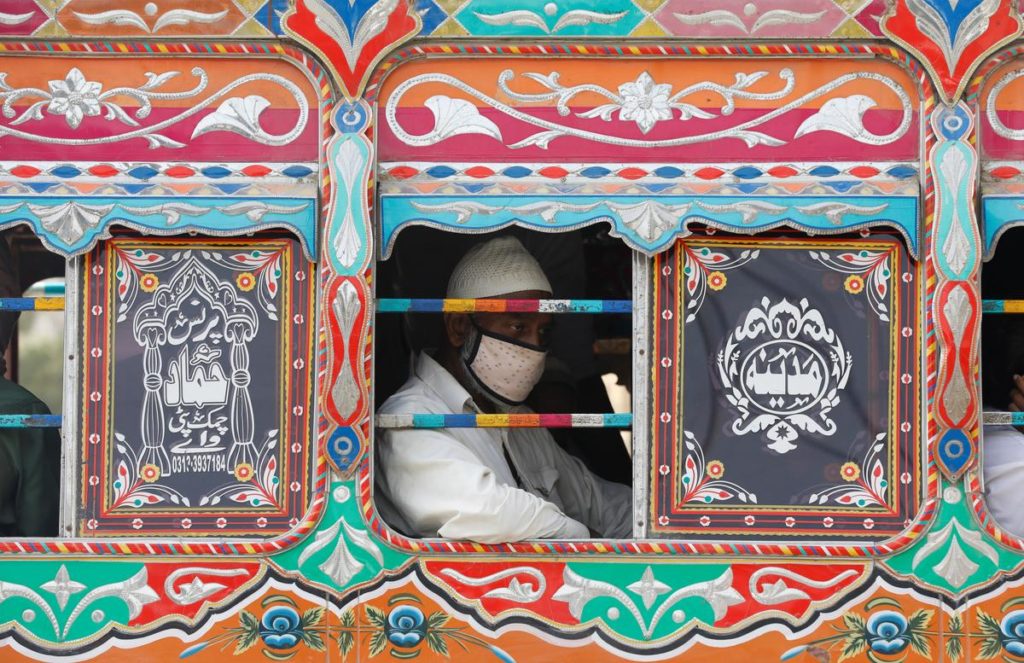 KARACHI, Pakistan (Reuters) – The World Health Organization has recommended Pakistani authorities reimpose “intermittent lockdowns” of targeted areas to curb the spread of the novel coronavirus, stating the country did not meet the global body’s conditions for lifting restrictions.

FILE PHOTO: A passenger wearing a protective face mask is seen from the window of a bus, after the provincial government started easing the lockdown restrictions and allowed to resume city public transport in Sindh, as the outbreak of the coronavirus disease (COVID-19) continues, in Karachi, Pakistan June 3, 2020. REUTERS/Akhtar Soomro

A surge of new cases has hit the South Asian nation after the government lifted its lockdown on May 9 citing economic pressures. A total of 108,316 cases and 2,172 deaths, have been recorded, with Monday seeing a single-day record of 105 fatalities.

In letters sent by the WHO on June 7 to health authorities of Pakistan’s two most populous provinces, Punjab and Sindh, it stressed the need to mitigate the risk of the health system collapsing.

More than one in five people have tested positive for COVID-19 over the last two weeks, compared with one in 10 before the lockdown was lifted, government statistics showed.

“WHO strongly recommends the government adapt the two weeks off and two weeks on strategy,” said the letter signed by WHO’s Head of Mission in Pakistan Dr Palitha Mahipala.

It was not immediately clear if the same advice was also sent to other provinces or the federal government.

The letter said the WHO recommends six conditions for lifting restrictions, including the disease transmission being “under control”, being able to detect, test, isolate and treat every case and trace every contact, essential places having established preventive measures, and communities being educated, engaged and empowered to “live under a new normal”.

Pakistan, the letter said, met none of the conditions.

Punjab and Sindh authorities both endorsed the WHO’s concerns and said the provincial cabinets would discuss the recommendations.

It is “extremely important” to develop capacity to conduct beyond 50,000 tests daily, the letter stated.

Pakistan, a country of over 207 million people, has tested a maximum of 24,000 people daily.