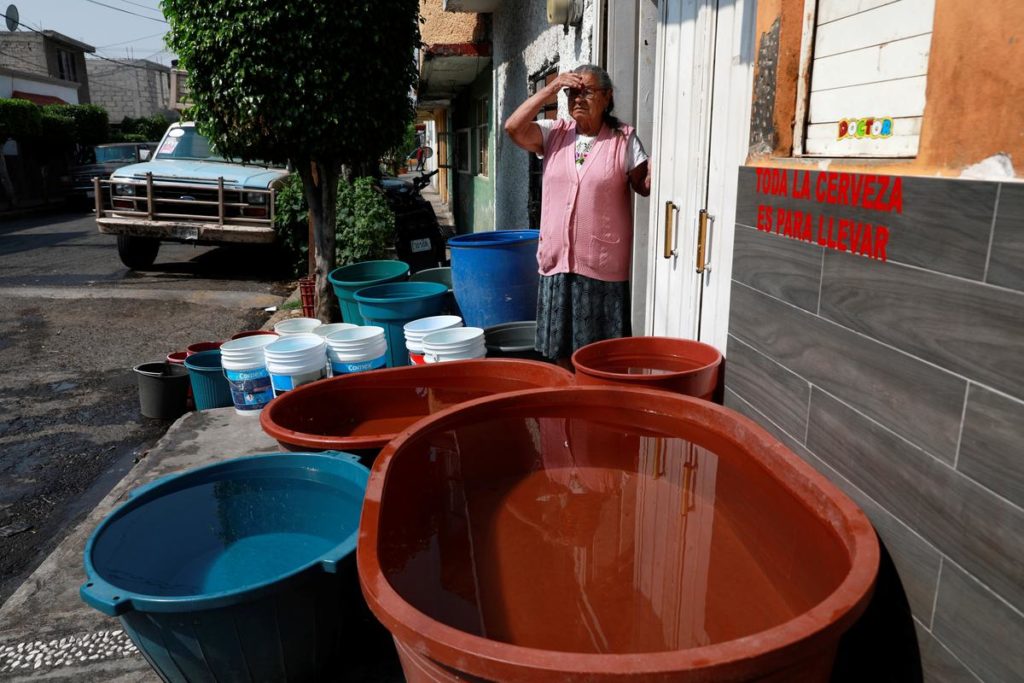 EL YUGUELITO, Mexico (Reuters) – In the shade of a rust-colored hill, a dozen women gathered on a dusty road to fill buckets from a water tanker truck that pulled up to service their modest community built on a former Mexico City dump.

FILE PHOTO: Carmelita Anguiano, 82, looks on at a water truck (not pictured) as it distributes water outside houses as part of a local government effort in the Melchor Muzquiz neighborhood, where water scarcity complicates attempts to sanitize the area amid the spread of the coronavirus disease (COVID-19), in Ecatepec, in the State of Mexico, Mexico April 16, 2020. REUTERS/Henry Romero

Grappling with the largest public health crisis in modern times, Mexican health authorities battling to stem a jump in new coronavirus infections have made the phrases “wash your hands” and “stay at home” their mantras.

But that is easier said than done for those mired in poverty without access to clean water.

“With the water shortage, they’re saying wash your hands. But how?” said 42-year old Erika Casasola, a resident of the El Yuguelito barrio, part of the sprawling, working-class borough of Iztapalapa on the southeastern edge of Mexico City.

Acutely aware of the dangers of the highly contagious virus that has infected over 11,600 people and killed 1,069 in Mexico, she was taking pains to keep herself and her family healthy.

“Now we’re using more water than we should be,” said Casasola, who was babysitting her young grandson as she poured a bucketful of water into a rickety washing machine.

The blue plastic barrels used to store water were sometimes home to worms, residents complained, and stood precariously close to a parked garbage truck making its rounds through the neighborhood as residents lined up to throw out their trash.

Even neighbors lucky enough to have running water said that it was flowing yellow and murky of late.

A spokesman for Iztapalapa Mayor Clara Brugada said lack of drinking water in parts of the borough was a historic problem, and that her policy was to provide free water by truck.

Still, residents, many of whom are out of work and short of cash, said they must often buy bottled water for personal use.

In a May 2017 report, the United Nations Special Rapporteur on the human rights to water and sanitation, Leo Heller, said Mexico had the highest per capita consumption of bottled water in the world, at 480 liters (127 gallons) a year.

“(That) is eloquent evidence of the distrust of the Mexican population in the water supplied to them,” the report said.

Meanwhile, the government statistics agency’s 2017 National Household Survey said that in Mexico City, only 79% of households have daily water supply. That study found that 11% of homes receive water two or fewer times a week.

Adriana Valencia, 24, lives in a home perched on an arid hilltop in nearby Ecatepec in the State of Mexico and said trucks delivered water only once every eight days.

“We recycle water for the bathroom, to clean the dishes, water the plants … I try to save some until the truck comes every eight days,” Valencia said. “We have little to no water.”

Francisco Moreno, an infectious disease expert and head of the COVID-19 program at Mexico City’s ABC medical center, underscored that like in other past crises, “the people with the most limited means are those that have the hardest time.”

Poorer Mexicans cannot afford to stay home because they live hand to mouth. Moreover, social distancing is difficult at home for them because cramped living quarters are often shared by many, and a scarcity of clean water complicates hygiene, he said.

“The best way of avoiding having the health system collapse is prevention. And prevention with this disease depends to a great degree on good hygiene with your hands,” said Moreno. “Unfortunately they’re prime candidates for getting infected.”