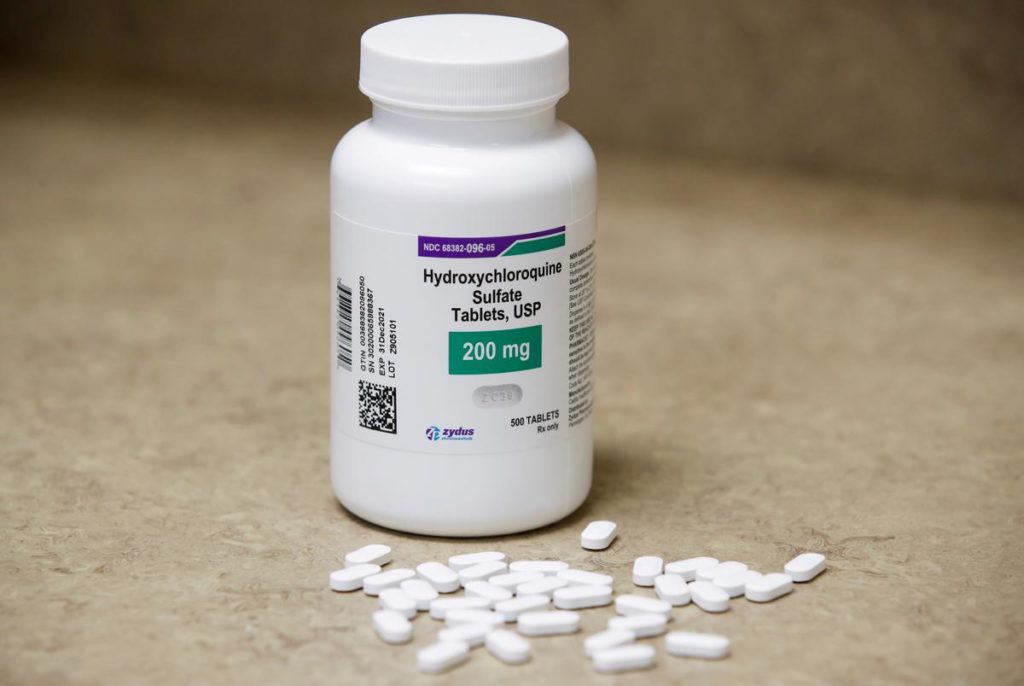 U.S. hospitals slash use of drug championed by Trump as coronavirus treatment

NEW YORK (Reuters) – U.S. hospitals said they have pulled way back on the use of hydroxychloroquine, the malaria drug touted by President Donald Trump as a COVID-19 treatment, after several studies suggested it is not effective and may pose significant risks.

Early hopes for the decades-old drug were based in part on laboratory experiments and its anti-inflammatory and antiviral properties. But its efficacy has so far failed to pan out in human trials, and at least two studies suggest it may increase the risk of death.

Several hospitals that two months ago told Reuters they were using hydroxychloroquine frequently for patients with COVID-19 have cut back.

Orders for the drug have dropped to a tenth of the late-March peak, to about 125,000 pills last week, said Vizient Inc, a drug buyer for about half of U.S. hospitals.

The significant decrease in use is a sign that U.S. physicians no longer believe the drug’s potential benefit outweighs the risks. Some European governments this week banned hydroxychloroquine use for COVID-19 patients.

“People were in our hospitals, they were dying, and we wanted to do something,” he recalled. “But the minute the data came out … showing no benefit and potential harm, I think we all needed to step back,” he said.

British medical journal The Lancet last week published an analysis of 96,000 COVID-19 patients showing those treated with hydroxychloroquine or the related chloroquine had higher risk of death and heart rhythm problems.

The observational study does not have the rigor of a randomized, placebo-controlled trial, but its size made it influential.

Seattle’s University of Washington hospital system has also stopped recommending hydroxychloroquine as a coronavirus standard of care, noting in its latest treatment guidelines that “recent clinical studies have not demonstrated virologic or clinical benefits.”

Trump has been a particularly strong supporter of hydroxychloroquine, calling it a “game changer” early on. He later said he was taking the drug to prevent infection despite no scientific evidence it could do so, after people who worked at the White House tested positive for COVID-19. He has also urged others to try the medicine.

Proponents of the drug as a COVID-19 treatment argue it may need to be administered at an earlier stage in the disease to be effective. Doctors are waiting for studies that might prove that.

Results could be released as early as this week for two of the University of Minnesota’s three hydroxychloroquine trials, according to Dr. Radha Rajasingham, lead researcher for one of the studies.

“Everyone’s idea of the safety of this drug kind of changed overnight,” Rajasingham said, referring to an April 24 U.S. Food and Drug Administration warning of increased risk of heart rhythm problems. “We have really had trouble enrolling” patients in the trials, she added.

Other studies comparing the drug to a placebo are expected later.

“We are still waiting for randomized, controlled data, but there is much less enthusiasm now for hydroxychloroquine, azithromycin and some of the other treatments that people have been touting,” said Dr. Timothy Brewer, an infectious disease specialist at the University of California, Los Angeles, which now recommends the drug’s use only in clinical trials.

“There is enough observational data to suggest that they have no benefit, or a small benefit, and there are some risks.”

Previous Post A New Hip or Knee Can Do a Marriage Good, Study Finds Next Post Only Half of Americans Say They’d Get a Coronavirus Vaccine