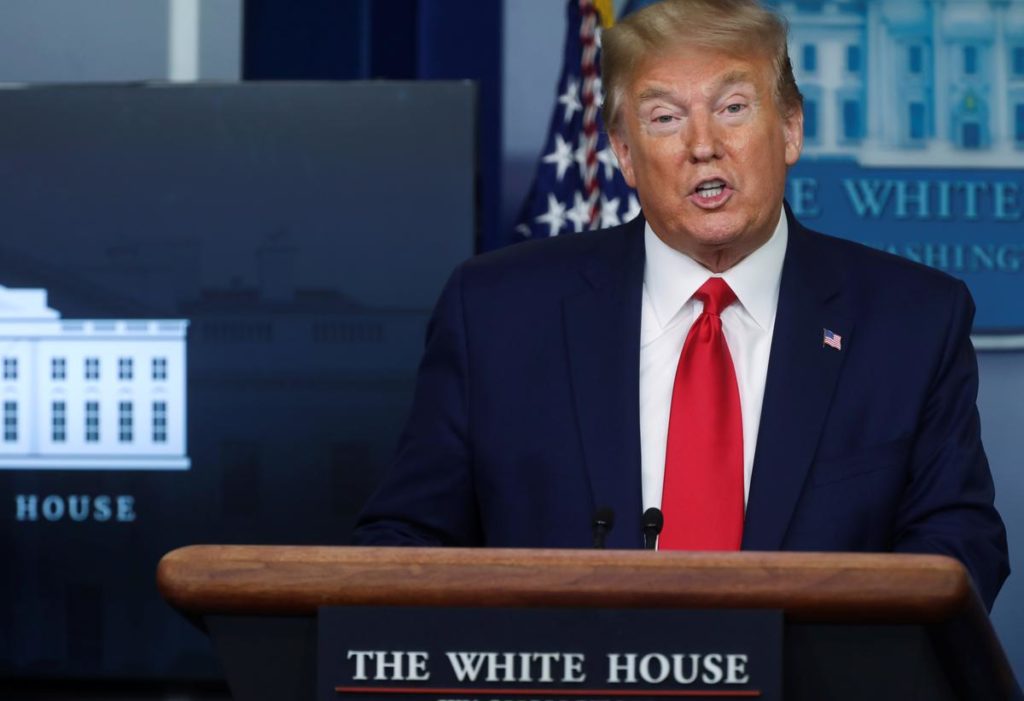 WASHINGTON (Reuters) – U.S. President Donald Trump’s response to the coronavirus took an even sharper political turn on Tuesday after he seized upon the crisis in a controversial move to suspend immigration, and as he planned to meet with the governor of New York, the hardest hit state.

Trump is also seizing the moment to launch a sweeping effort to repeal or suspend federal business regulations in a separate executive action, the Washington Post reported on Tuesday, citing two unnamed people familiar with the planning.

The developments came as Trump planned to meet on Tuesday with New York Governor Andrew Cuomo, who has clashed with the administration over its response to the crisis, emerging as a foil to the president with a calm and fact-based approach.

New York is at the epicenter of the crisis, accounting for nearly half of the deaths across the country, and has taken a cautious stance on reopening businesses and schools. On Monday, New York City said that concerts and other large events would be cancelled through June, a contrast with some southern states like Georgia and South Carolina which are taking steps this week to relax their lockdowns.

Click here for a GRAPHIC tracking the novel coronavirus in the U.S.

On Tuesday New York City Mayor Bill de Blasio warned Trump that he could “kiss his re-election goodbye” if he did not address the shortage of testing supplies and provide more federal assistance to cities and states with battered finances.

“These are the two things he has dropped the ball on,” de Blasio said on CNN, describing Trump’s comments on immigration as a diversion. “You are not going to have a restart and economic recovery if cities and states are back on their heels.”

Trump announced his move on immigration on Twitter late on Monday, suggesting it would prevent further contagion from outsiders while saving American jobs.

“In light of the attack from the Invisible Enemy, as well as the need to protect the jobs of our GREAT American Citizens, I will be signing an Executive Order to temporarily suspend immigration into the United States,” he said in a tweet.

Trump has for weeks asserted the U.S. outbreak would have been much worse had it not been for his earlier efforts to “ban” air travel from China – the origin of the pandemic – even though thousands of people, according to the New York Times, continued to arrive from China after restrictions took effect.

The White House declined to immediately offer further details on the reasoning behind the decision, its timing or its legal basis.

“You cut off immigration, you crater our nation’s already weakened economy,” Julian Castro, a Cabinet secretary in the Obama administration and a former presidential candidate, said on Twitter. “What a dumb move.”

Others said Trump’s action made sense.

“With tens of millions of Americans who want to work full time not able to, most immigration makes no sense today, and to allow it to continue at its current level at this time would show a callous disregard for those enduring deep economic suffering,” Roy Beck, president of NumbersUSA, a group advocating lower immigration levels.

At the same time the Trump administration will move to relax regulations affecting environmental, health care, workplace safety and labor polities, while also making permanent other temporary regulations put in place to respond to the coronavirus, the Washington Post reported.

Trump, who had staked his upcoming re-election on the strength of the U.S. economy, had been pressing to swiftly end the shutdown, which has left at least 22 million people jobless nationwide, a level of unemployment not seen since the Great Depression of the 1930s.

Previous Post Is COVID-19 Causing More People to Suffer Heart Attacks at Home? Next Post Aftermath of Seizures Troubling for Those With Epilepsy