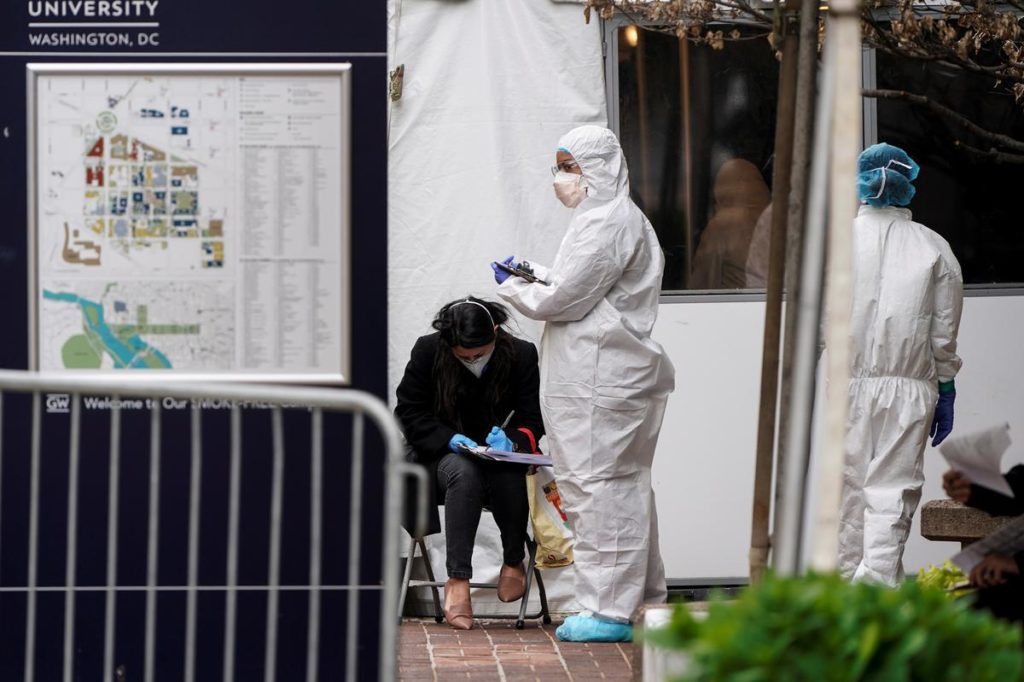 WASHINGTON (Reuters) – The coronavirus outbreak could reach its peak in the United States this week, a top U.S. health official said on Monday as more signs of stabilization emerged, but political leaders said a reopening of the economy may hinge on more widespread testing.

The United States, with the world’s third-largest population, has recorded more fatalities from COVID-19 than any other country, more than 22,000 as of Monday morning according to a Reuters tally.

The number of deaths reported on Sunday was 1,513, the smallest increase since 1,309 died on April 6. The largest number of fatalities is still in and around New York City, the most populous U.S. city with about 8.4 million people.

“We are nearing the peak right now,” Robert Redfield, director of the Centers for Disease Control and Prevention (CDC), told NBC’s “Today” show. “You’ll know when you’re at the peak when the next day is actually less than the day before.”

Official statistics, which exclude deaths outside of hospitals, have understated the actual number of people who have succumbed to COVID-19, the respiratory disease caused by the new coronavirus, health experts said. (Graphic: tmsnrt.rs/2w7hX9T)

In New York City, the epicenter of the outbreak, three indicators have to show a sustained decline before the city could consider the outbreak to be in a less dangerous phase, Mayor Bill de Blasio said. Those indicators are the daily number of people admitted to hospitals, the number of people in intensive care units, and the percentage of positive tests for the virus.

“I’m pleased to report we do see all the indicators moving in the right direction, moving downward together,” said de Blasio, who stressed the need for widespread testing before experts could be confident that the city had entered a new phase and could lift social-distancing restrictions.

Sweeping stay-at-home restrictions to curb the spread of the disease, in place for weeks in many areas of the United States, have taken a painful toll on the economy. With businesses closed and curbs on travel, officials and lawmakers are debating when it might be safe to begin reopening some sectors.

New York City Health Commissioner Dr. Oxiris Barbot acknowledged a “tightening” of the supply chain for swabs needed in coronavirus testing, and said it was part of a “national and international challenge” to ramp up testing.

“The most important is we won’t be able to get this over the finish line if we don’t have the supply that the mayor was calling for and the assistance from the federal government.”

To ease the impact of the shutdown on the U.S. economy, the two top Democrats in the U.S. Congress called on Republicans on Monday to authorize more funding for national testing for the coronavirus, which health experts say is crucial to begin to restart business.

Two days ago, Republicans renewed their push for a $250 billion measure to help small businesses while doubling down on their opposition to Democratic efforts to broaden the legislation to include other provisions such as funds for testing.

“We have real problems facing this country, and it’s time for the Republicans to quit the political posturing by proposing bills they know will not pass either chamber and get serious and work with us towards a solution,” House of Representatives Speaker Nancy Pelosi and Senate Democratic leader Chuck Schumer said in a joint statement.

The Trump administration has indicated May 1 as a potential date for easing the restrictions while urging caution.

The CDC’s Redfield declined to give a time frame for the re-opening of the U.S. economy and also praised social-distancing measures. “It’s going to be a step-by-step gradual process. It’s got to be data-driven.”

More than 2 million tests have been carried out so far but they are not available to many who need them, Dr. Stephen Hahn, commissioner of the Food and Drug Administration, said on ABC’s “This Week” on Sunday.

“We need to do more, no question about that,” Hahn said.

President Donald Trump retweeted a call to fire Dr. Anthony Fauci after the country’s top expert on infectious diseases said lives could have been saved if the United States had shut down sooner during the novel coronavirus outbreak. The White House on Monday did not comment on Trump’s retweet.

Previous Post April 13, 2020 — A roundup of the latest news about COVID-19 Next Post Ford making masks to protect workers against COVID-19