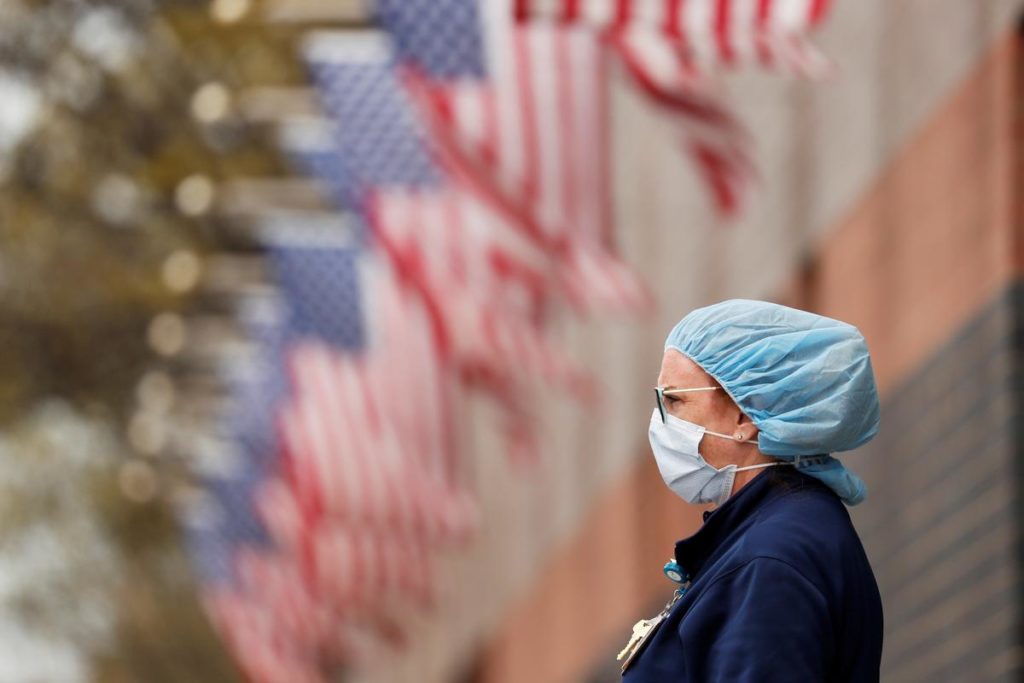 FILE PHOTO: A nurse wearing personal protective equipment watches an ambulance driving away outside of Elmhurst Hospital during the ongoing outbreak of the coronavirus disease (COVID-19) in the Queens borough of New York, U.S., April 20, 2020. REUTERS/Lucas Jackson

(Reuters) – U.S. coronavirus deaths topped 45,000 on Tuesday doubling in a little over a week and rising by a near-record amount in a single day, according to a Reuters tally.

The United States has by far the world’s largest number of confirmed coronavirus cases at over 810,000, almost four times as many as Spain, the country with the second-highest number. Globally, cases topped 2.5 million on Tuesday.

New Jersey, Pennsylvania and Michigan each reported their highest single-day coronavirus-related death tolls on Tuesday – over 800 between the three states. New York state, the epicenter of the U.S. outbreak, reported 481 new deaths.

Health officials have noted that deaths are a lagging indicator of the outbreak, coming weeks after patients fall sick, and do not mean stay-at-home restrictions are failing to slow the spread of the virus.

New reported U.S. cases appear to be slowing this week, rising by less than 30,000 a day for the past four days through Tuesday. The United States had a record 35,392 new cases on April 4.

States including Georgia and South Carolina eased restrictions on imposed during the pandemic that shut down businesses and largely confined residents to their homes following protests in Michigan, Pennsylvania, California and elsewhere.

A Reuters/Ipsos opinion poll released on Tuesday showed a majority of Americans believed that stay-at-home orders should remain in place until public health officials determine that lifting them is safe, despite the damage to the U.S. economy.

The measures have forced more than 22 million people to apply for unemployment benefits in the last month and caused oil prices to crash as the pandemic has obliterated demand for fuel.