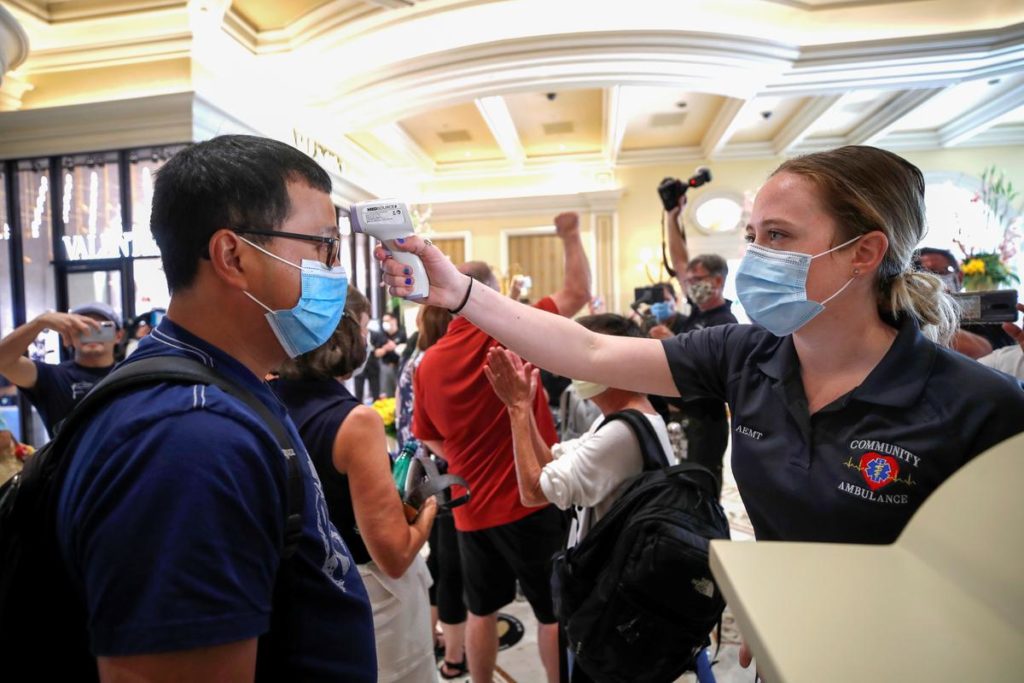 A medical worker checks the temperature of an arriving guest during the reopening of Bellagio hotel-casino, closed since March 16, 2020 as part of steps to slow the spread of the coronavirus disease (COVID-19), in Las Vegas, Nevada, U.S. June 4, 2020. REUTERS/Steve Marcus

(Reuters) – The novel coronavirus has killed more than 110,000 people in the United States, according to a Reuters tally on Sunday, as nationwide protests against racial injustice spark fears of a resurgence of the virus.

About 1,000 Americans have died on average each day so far in June, down from a peak of 2,000 a day in April, according to the tally of state and county data on COVID-19 deaths. (Reuters interactive: tmsnrt.rs/2w7hX9T)

Total U.S. coronavirus cases are approaching 2 million, the highest in the world followed by Brazil with about 672,000 cases and Russia with about 467,000.

Several southern U.S. states reported sharp increases in COVID-19 infections, with Alabama, South Carolina and Virginia all seeing new cases rise 35% or more in the week ended May 31 compared with the prior week, according to a Reuters analysis.

Globally, coronavirus cases are approaching 7 million with about 400,000 deaths since the outbreak began in China late last year and then arrived in Europe and the United States.