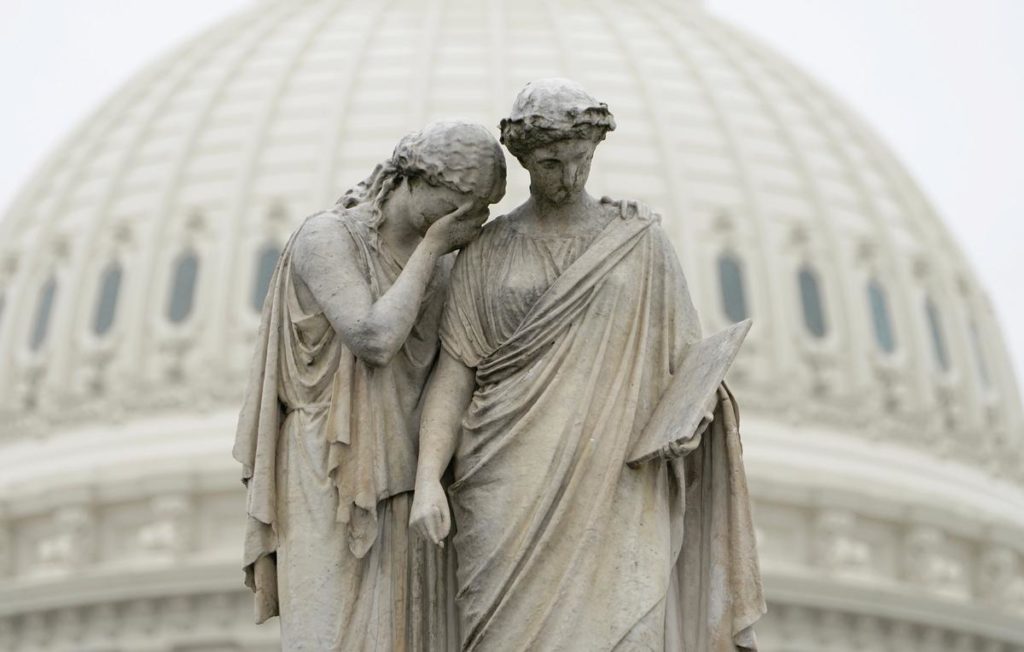 LONDON (Reuters) – A mental illness crisis is looming as millions of people worldwide are surrounded by death and disease and forced into isolation, poverty and anxiety by the pandemic of COVID-19, United Nations health experts said on Thursday.

FILE PHOTO: “Grief holds her covered face against the shoulder of History and weeps in mourning” as depicted at the Peace Monument in front of the U.S. Capitol in Washington, U.S., March 23, 2020. REUTERS/Kevin Lamarque/File Photo

“The isolation, the fear, the uncertainty, the economic turmoil – they all cause or could cause psychological distress,” said Devora Kestel, director of the World Health Organization’s (WHO) mental health department.

Presenting a U.N. report and policy guidance on COVID-19 and mental health, Kestel said an upsurge in the number and severity of mental illnesses is likely, and governments should put the issue “front and centre” of their responses.

“The mental health and wellbeing of whole societies have been severely impacted by this crisis and are a priority to be addressed urgently,” she told reporters at a briefing.

The report highlighted several regions and sections of societies as vulnerable to mental distress – including children and young people isolated from friends and school, healthcare workers who are seeing thousands of patients infected with and dying from the new coronavirus.

Emerging studies and surveys are already showing COVID-19’s impact on mental health globally. Psychologists say children are anxious and increases in cases of depression and anxiety have been recorded in several countries.

Domestic violence is rising, and health workers are reporting an increased need for psychological support.

Reuters last week reported from interviews with doctors and nurses in the United States who said either they or their colleagues had experienced a combination of panic, anxiety, grief, numbness, irritability, insomnia and nightmares.

Outside of the health sector, the WHO report said many people are distressed by the immediate health impacts and the consequences of physical isolation, while many others are afraid of infection, dying, and losing family members.

Millions of people are facing economic turmoil, having lost or being at risk of losing their income and livelihoods, it added. And frequent misinformation and rumours about the pandemic and deep uncertainty about how long it will last are making people feel anxious and hopeless about the future.

It outlined action points for policy-makers to aim “to reduce immense suffering among hundreds of millions of people and mitigate long-term social and economic costs to society”.

These included redressing historic under-investment in psychological services, providing “emergency mental health” via remote therapies such as tele-counselling for frontline health workers, and working proactively with people known to have depression and anxiety, and with those at high risk of domestic violence and acute impoverishment.