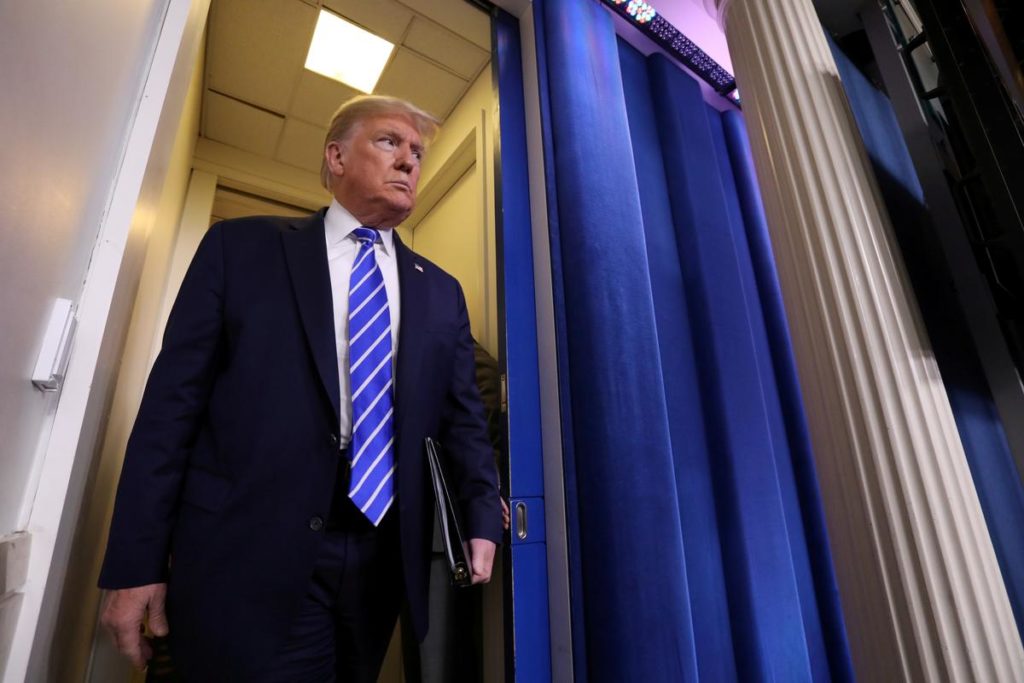 An international chorus of doctors and health experts urged people not to drink or inject disinfectant after Trump on Thursday suggested that scientists should investigate inserting the cleaning agent into the body as a way to cure COVID-19, the respiratory illness caused by the new coronavirus.

Trump on Friday sought to portray his remarks as sarcasm.

“I was asking a question sarcastically to reporters like you just to see what would happen,” Trump told reporters at the White House.

His remarks during his daily media briefing on Thursday, directed at doctors in the room who serve on his coronavirus task force, did not come across as sarcasm.

“It is unfortunate that I have to comment on this, but people should under no circumstances ingest or inject bleach or disinfectant,” American Medical Association President Patrice Harris said in a statement. “Rest assured when we eventually find a treatment for or vaccine against COVID-19, it will not be in the cleaning supplies aisle.”

Trump said on Thursday that scientists should explore whether inserting ultraviolet light or disinfectant into the bodies of people infected with the coronavirus might help them clear the disease.

“Is there a way we can do something like that by injection, inside, or almost a cleaning?” Trump asked. “It would be interesting to check that.”

Pressed repeatedly about the issue on Friday, Trump said he was not encouraging people to ingest disinfectant.

Trump also has promoted an anti-malaria drug called hydroxychloroquine to treat COVID-19 even though its effectiveness is unproven and there are concerns about heart issues. The U.S. Food and Drug Administration on Friday cautioned against using hydroxychloroquine in COVID-19 patients outside of hospitals and clinical trials, citing risks of serious heart rhythm problems.

Reckitt Benckiser (RB.L), a British company that manufactures the household disinfectants Dettol and Lysol, issued a statement warning people not to ingest or inject its products.

The American Cleaning Institute, representing the U.S. cleaning products industry, said in a statement, “Disinfectants are meant to kill germs or viruses on hard surfaces. Under no circumstances should they ever be used on one’s skin, ingested or injected internally.”

There were early signs that at least some Americans were preparing to act on Trump’s comments. A spokesman for Maryland’s governor wrote on Twitter that the state’s Emergency Management Agency had received more than 100 calls about the use of bleach to treat COVID-19.

House of Representatives Speaker Nancy Pelosi, the top Democrat in the U.S. Congress, said she doubted that the Republican president was being sarcastic, telling MSNBC sarcastically “it seemed like he was speaking from his usual great authority on every subject.”

Joe Biden, Trump’s presumptive Democratic challenger in the Nov. 3 U.S. election, wrote on Twitter, “I can’t believe I have to say this, but please don’t drink bleach.”

Trump’s suggestion unleashed a torrent of ridicule online, with one comedian on social media app TikTok miming the action of injecting bleach into her veins like a drug.

On Twitter, journalists shared a video of Deborah Birx, the coordinator of the White House task force on the coronavirus, who appeared to look down, hunch her shoulders, and blink rapidly as Trump told the briefing that disinfectant “does a tremendous number on the lungs.”

The White House initially on Friday said critics were taking Trump’s remarks out of context. At an Oval Office event later on Friday, as Trump sought to walk back his comments he also returned to the notion that disinfectants and sunlight might help within the body.

Health professionals have been encouraging people to wash their hands thoroughly with soap or to use hand sanitizer to combat the spread of the virus.

“I do think that disinfectant on the hands could have a very good effect,” Trump said.

U.S. President Donald Trump looks at a chart about “Best Practices for Every American” during the daily coronavirus task force briefing at the White House in Washington, U.S., April 23, 2020. REUTERS/Jonathan Ernst

“Sun and heat and humidity wipe it out. And this is from tests – they’ve been doing these tests for … a number of months. And the result – so then I said, ‘Well, how do we do it inside the body or even outside the body with the hands and disinfectant I think would work.’”

While ultraviolet rays are known to kill viruses contained in droplets in the air, doctors say there is no way UV light could be introduced into the human body to target cells infected with the coronavirus.

“Neither sitting in the sun, nor heating will kill a virus replicating in an individual patient’s internal organs,” said Penny Ward, a professor in pharmaceutical medicine at Kings College London.

Reporting by Kate Kelland in London and Raphael Satter in Washington; Additional reporting by Jeff Mason, Steve Holland and Lisa Lambert in Washington; Editing by William Maclean, Howard Goller and Will Dunham