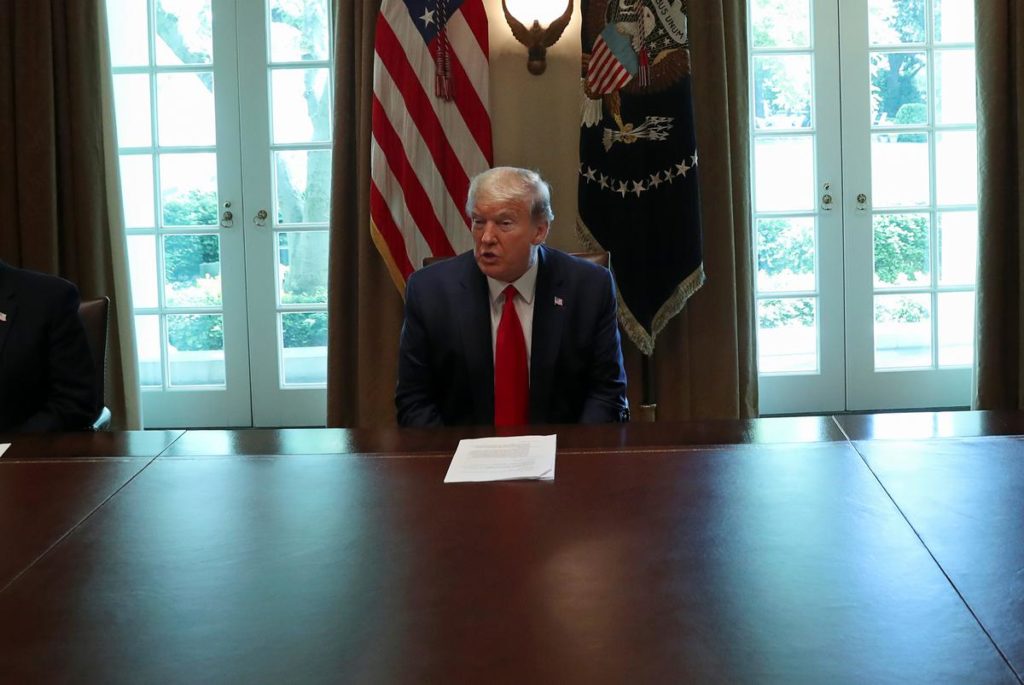 NEW YORK/WASHINGTON (Reuters) – President Donald Trump on Tuesday suggested some Democratic governors were “mutineers” after New York Governor Andrew Cuomo said he would refuse any order to reopen the economy too soon and risk reigniting the coronavirus outbreak in his state.

Cuomo, a Democrat whose state has been the epicenter of the outbreak in the United States, and governors of six other northeastern states said on Monday they would formulate a regional plan to gradually lift social-distancing restrictions that have shut down non-essential businesses and schools.

On the Pacific Coast, the governors of California, Oregon and Washington state said they also would take a regional approach, but cautioned that any large-scale reopening would depend on a decline in the rate of spread in their area.

“Tell the Democrat Governors that ‘Mutiny On The Bounty’ was one of my all time favorite movies,” the Republican Trump wrote on Twitter on Tuesday, referring to a film classic about a rebellion against the commanding officer of a British naval vessel in the late 18th century.

“A good old fashioned mutiny every now and then is an exciting and invigorating thing to watch, especially when the mutineers need so much from the Captain. Too easy!” Trump wrote.

Offering an expansive assessment of the powers of the presidency, Trump on Monday asserted he had ultimate authority to reopen the largely shuttered economy even though he earlier had deferred to state governors in putting social-distancing orders in place.

“If he ordered me to reopen in a way that would endanger the public health of the people of my state, I wouldn’t do it,” Cuomo told CNN early in the day, referring to Trump.

At a news conference later, Cuomo added, “We don’t have a king in this country, we have a Constitution and we elect the president.”

The wrangling coincides with signs the outbreak has been slowing in New York and other states where it struck early.

Cuomo said on Monday “the worst is over” for New York as hospitalizations appeared to be reaching a plateau and deaths increased by 671, the lowest daily total in a week.

Even so, the governor said on Tuesday, any reopening would have to come in phases and take months to complete. Widespread testing is the key to a successful restart, Cuomo said.

Trump on Monday pushed back against the idea that governors should determine when and how to reopen their state economies, insisting that he had that right as president.

“When somebody is the president of the United States, the authority is total,” he said a news briefing. “The governors know that.”

The New York governor, who has made a point of saying policy should be guided by science and not politics, cautioned that a premature order by Trump would set off a federal clash with the states that would end up in court.

Trump, seeking re-election on Nov. 3, also fired back at Cuomo by name in his Tuesday tweets.

“Cuomo’s been calling daily, even hourly, begging for everything, most of which should have been the state’s responsibility, such as new hospitals, beds, ventilators, etc. I got it all done for him, and everyone else, and now he seems to want Independence! That won’t happen!” Trump wrote.

Some Republicans, including the governors of Ohio, Maryland and New Hampshire, have also said the states had the right to decide when and how to re-open the economy.

“It’s the governors that are going to make decisions about when certain activities are allowed,” U.S. Senator Marco Rubio, a Republican, told CNBC on Tuesday. “Obviously, the guidance from the federal government coming from the White House is going to be very influential in that.”

FILE PHOTO: New York Governor Andrew Cuomo speaks during a news conference at the Jacob K. Javits Convention Center which will be partially converted into a temporary hospital during the outbreak of the coronavirus disease (COVID-19) in New York City, New York, U.S., March 24, 2020. REUTERS/Mike Segar

Cuomo said total hospitalizations in New York were “basically flat,” adding, “We think we are at the apex on the plateau.” Cuomo said there were 778 deaths in his state in the past day – up by more than 100 from the prior day.

“It has been the most painful number every day,” the governor said.