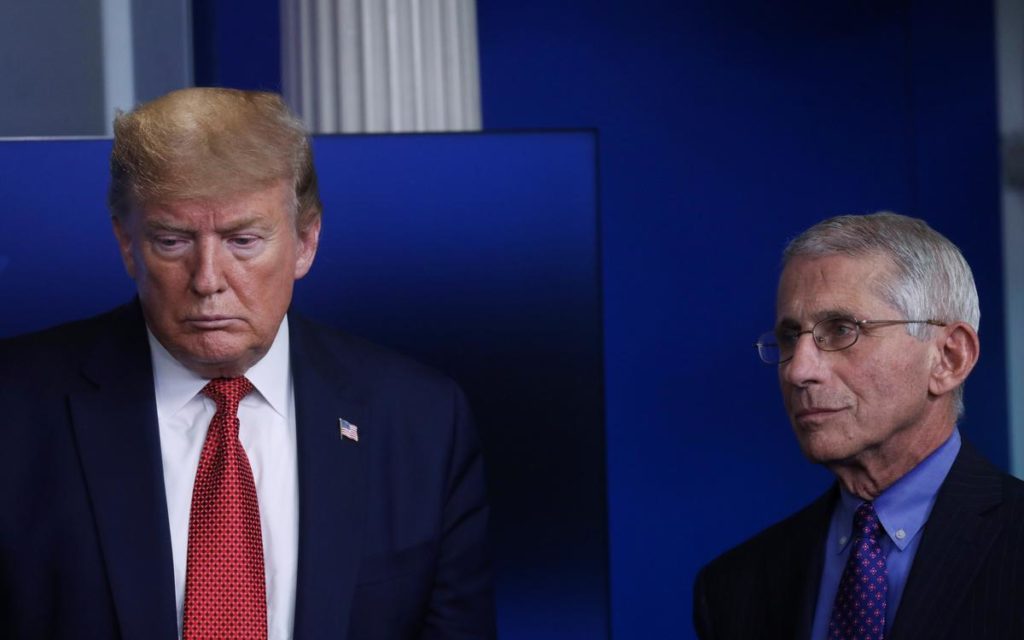 FILE PHOTO: President Donald Trump stands with Dr Anthony Fauci during an announcement of the Trump administration’s guidelines for “Opening Up America Again” during the daily coronavirus task force briefing at the White House in Washington, U.S., April 16, 2020. REUTERS/Leah Millis

Fauci, though, told reporters during a White House meeting with Trump that the data on the drug, remdesivir, needs to be further analyzed.

Some trial data for the drug will likely be announced later on Wednesday at a White House task force briefing, according to the National Institute of Allergy and Infectious Diseases.

Gilead on Wednesday said remdesivir helped improve outcomes for patients with COVID-19 in a clinical trial, and provided data suggesting it worked better when given earlier in the course of illness caused by the virus. The closely watched drug has moved markets in the past few weeks following release of partial information on several studies that painted a mixed picture of its effectiveness.

Former U.S. Food and Drug Administration chief Scott Gottlieb said on Twitter there was now enough data to support authorizing the drug for emergency use.

Fauci told reporters the data shows the drug had benefit in reducing the time to recover from the virus. While the data still must be peer-reviewed, he said it is opening the door to the possibility of a treatment.

There are currently no approved treatments or vaccines for the highly contagious novel coronavirus, but many approaches are being tried while awaiting an effective vaccine to prevent infection by the virus.

Trump said it is a beginning that can be built upon.

Asked by Fox Business Network earlier if the results announced by Gilead were a positive for the economy, White House economic adviser Larry Kudlow said: “Has to be a tremendous positive.”

“These are confidence-inspiring things that will help open the economy and get folks back to work,” he said of any drug trials that show promise.

Previous Post Job Strain May Boost Odds of Serious Artery Disease Next Post Some NFL Players May Be Misdiagnosed With Brain Disease: Study