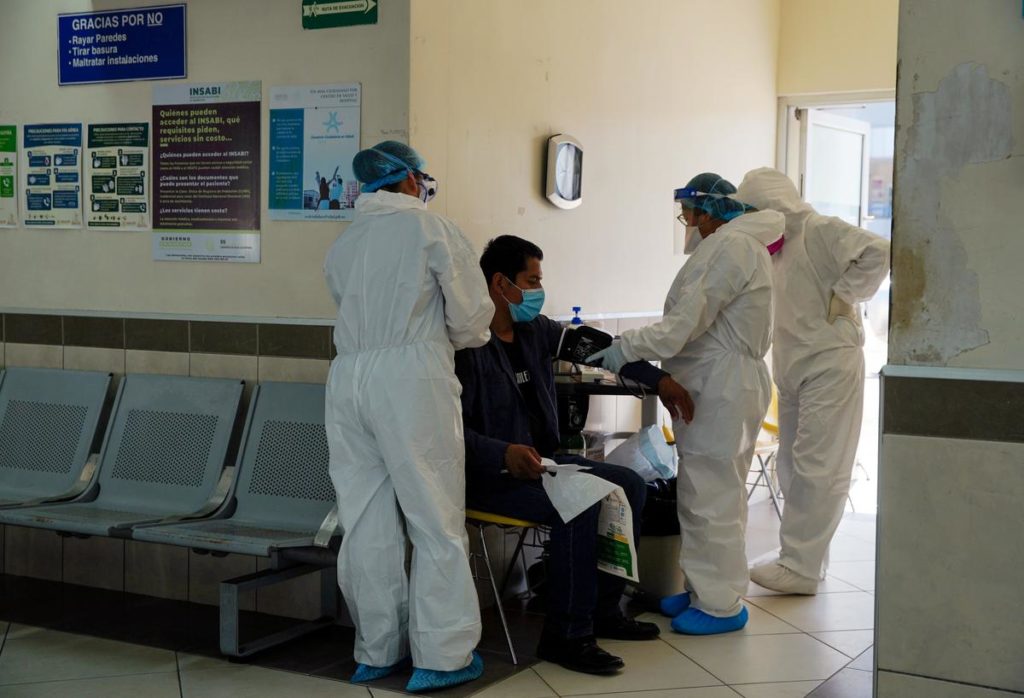 TIJUANA, Mexico (Reuters) – The number of deaths from the coronavirus in Mexico’s best-known border city, Tijuana, has soared and the COVID-19 mortality rate is twice the national average, the health ministry says, after medical staff quickly fell ill as the outbreak rampaged through hospital wards.

A floor at one of the city’s main public hospitals has been left empty because so many workers are sick there are not enough left to care for patients, the hospital director said, despite people with COVID-19 symptoms lining up outside to get in for treatment.

More than 21% of patients who have tested positive for coronavirus in the city do not survive, health ministry data showed as of Thursday. In the rest of Mexico, the figure was just under 10%

While Tijuana’s figure might be due partly to an unduly high proportion of very sick patients being tested for coronavirus, Alberto Reyes Escamilla, director of Tijuana General Hospital, said he thought it was directly linked to the hospital’s personnel shortage.

“It has a lot to do with the fact that we don’t have staff,” he said, adding that about 500 of his 1,200 person pre-pandemic staff are either off sick or furloughed because of vulnerability to the illness.

“We have a floor that could hold 30 more patients, but we can’t use it because I don’t have the personnel,” said Reyes, who heads one of three public hospitals treating coronavirus.

The two other public hospitals in Tijuana that are treating coronavirus patients also had a large number of staff out sick but the agency running those clinics denied that the high death rate was due to staff shortages.

Tijuana is the municipality with the most deaths attributed to COVID-19 in Mexico, 243 so far, according to state and federal health department data.

That is more than across the U.S. border in San Diego, California, which has a similar population but four times as many confirmed cases.

Outside Tijuana’s three coronavirus hospitals, patients line up for hours to enter, mingling with crowds of family members who wait for days for news about loved ones, according to nurses and a Reuters witness.

Another doctor at Tijuana General, who asked not to be named because he was not authorized to speak to media, said the staffing shortage, especially of nurses, was forcing medics to concentrate on treating the most serious cases, risking allowing other COVID-19 patients’ conditions to worsen in the meantime. However, some officials blamed the nature of the virus itself.

The Baja California state health department, which operates the hospital, did not respond to multiple requests for comment. In April, state health secretary Alonso Oscar Perez acknowledged in public comments that staffing shortages had prevented the hospital from opening more beds.

The two other coronavirus hospitals in the city are operated by the federal government’s Mexican Social Security Institute (IMSS).

IMSS Baja California planning coordinator Clemente Martinez told Reuters nearly 14% of doctors at each of the IMSS hospitals in Tijuana had been sent home with coronavirus-related symptoms since the pandemic began, and that other high-risk doctors had been furloughed proactively.

He described the IMSS hospitals as having “a large number of workers who have been infected by the virus” but said Tijuana’s high number of deaths was not caused by a staff shortage. “Does it mean that the disease’s mortality or lethality increases? No. The disease’s lethality is clear,” he said.

Last month, Baja California governor Jaime Bonilla said doctors, many of whom work in both the state and federal system, were “dropping like flies” in Tijuana.

A medical assistant who works in IMSS Hospital 1 — one of Tijuana’s coronavirus hospitals – described a grim scene.

“The corpses no longer fit in the morgue; they’re putting the bodies in the hallway and covering them with black tarps,” said medical assistant Ramona Vega.

Martinez acknowledged that the morgue, which is built to hold four corpses, did not always have space now.

“In any given moment, the number of deaths from this epidemic is far higher,” he said.

Mexico’s national coronavirus mortality rate is already well above the global average, a result largely attributed to the country having the lowest testing rate in the OECD group of developed nations, and a high incidence of obesity-related diseases.

Alan Rafael Muro, an emergency room doctor who also works with the Mexican Red Cross in Tijuana, said deaths in the city were even higher than registered because some fatal victims with respiratory distress or other coronavirus-related symptoms were not reaching hospital.

“We’re not even counting people who die in their homes,” he said. Reuters witnessed Muro and fellow paramedics respond to multiple 911 calls within a 24-hour period where people they suspected of having COVID-19 were dead when help arrived.

Deputy health minister Hugo Lopez-Gatell, who has spearheaded Mexico’s response to the outbreak, told Reuters this week that the country’s coronavirus death toll is higher than the official count which now stands at around 2,900.

IMSS official Martinez said Tijuana was hard-hit by coronavirus earlier than the rest of Mexico because of proximity to the United States, but that mortality figures nationally would likely rise as the virus spreads throughout the interior.

“Statistically that’s what we expect, although I firmly hope it’s not what happens, despite the statistics saying otherwise,” Martinez said.