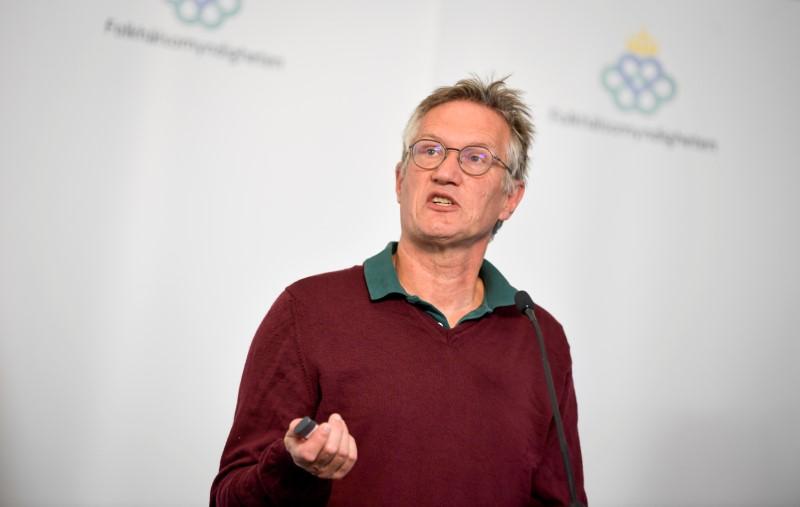 Sweden should have done more against coronavirus but broad strategy right: chief epidemiologist

STOCKHOLM (Reuters) – Sweden’s chief epidemiologist said on Wednesday the country should have done more to combat the coronavirus but backed the broad strategy, which avoided the strict lockdowns seen in many other countries.

FILE PHOTO: Anders Tegnell, the state epidemiologist of the Public Health Agency of Sweden speaks during a news conference about the daily update on the coronavirus disease (COVID-19) situation, in Stockholm, Sweden May 27, 2020. Pontus Lundahl/TT News Agency/via REUTERS

Anders Tegnell told Swedish radio in a morning interview that Sweden, which research group Ourworldindata.org says has the eighth highest number of coronavirus-related deaths per capita, “clearly” could have done better in fighting the virus.

But he later told a news conference he stood by the overall strategy, which he helped shape and relies largely on voluntary action, social distancing and common-sense hygiene advice.

“We continue to believe the strategy is good but then there are always improvements one can make, especially if you look back over time,” he told the news conference. “It would be strange if you gave a different answer to that question.”

He said that in hindsight Sweden could have been better prepared and have started testing earlier and more extensively.

Sweden has a lower COVID-19 mortality rate than European countries such as Britain, Spain and Italy which enforced stringent lockdowns.

But Ourworldindata.org. puts Sweden’s COVID-19 mortality rate at 443 deaths per million people, and said its rate was the highest in Europe for parts of May.

“If we were to run into the same disease, knowing exactly what we know about it today, I think we would end up doing something in between what Sweden did and what the rest of the world has done,” Tegnell told Swedish radio.

Prime Minister Stefan Lofven, who has promised an enquiry, did not respond to a request for comment but Health and Social Affairs Minister Lena Hallengren hit back.

“The government has been, at all times, prepared to introduce wider, further measures recommended by the expert authority,” Hallengren said in a written response to Reuters, referring to the Public Health Agency where Tegnell works.

Lofven told the Aftonbladet daily the overall strategy of limiting the disease while also protecting workers and companies had been the right one.

“At the same time, we have to admit that when it comes to elderly care and the spread of infection, that has not worked,” he said. “Too many old people have died here.”

Most of Europe shut schools, shops and businesses. Sweden closed care homes to visitors in late March, but around half its coronavirus-related deaths have been among elderly people living in care facilities.

Recent antibody-tests have also indicated the number of infected people is fewer than in the Public Health Agency’s models and that so-called herd immunity could be further off than predicted.

The government has also received criticism for failing to reach its target of 100,000 tests per week.

Tegnell said it was hard to know what other measures Sweden should have taken but it might become clearer as countries ease restrictions.

Bjorn Olsen, Professor of Infectious Medicine at Uppsala University, said Sweden’s strategy had been catastrophic, “one of Sweden’s biggest embarrassments and most tragic events”.

Calling for more contact tracing and coronavirus test, he said: “As long as people are dying, we must try to change.”