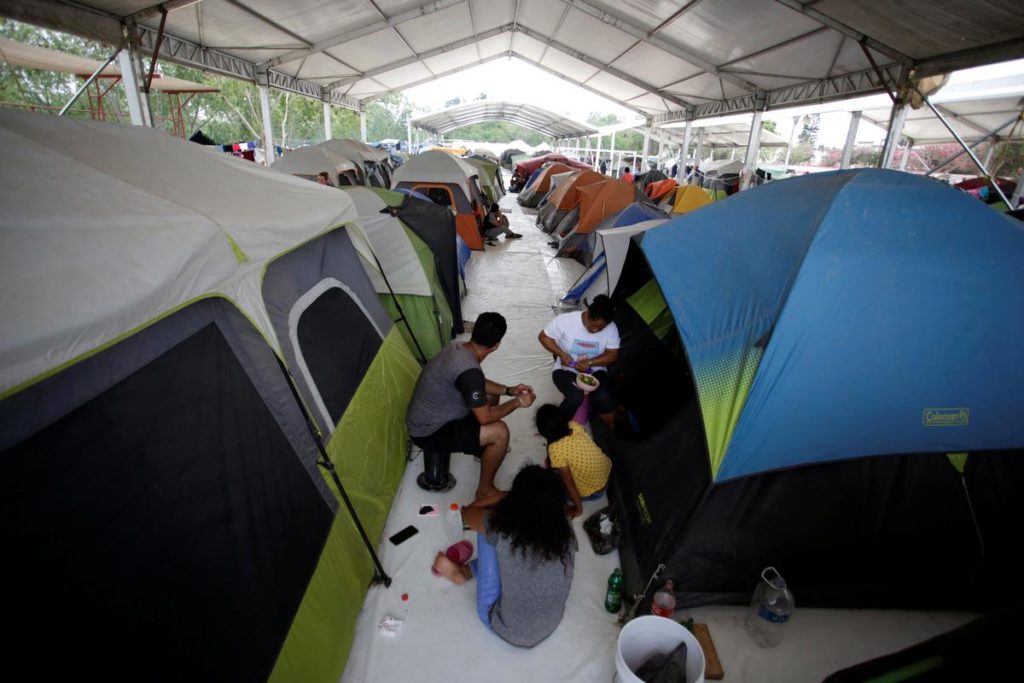 Supplies for coronavirus field hospital held up at U.S.-Mexico border

(Reuters) – Red tape and rules on importing medical gear have delayed work on a field hospital for migrants in an asylum camp near Mexico’s border with Texas, undercutting efforts to prepare for the coronavirus pandemic, according to organizers of the project.

A family of migrants are seen outside a tent at a migrant encampment where more than 2,000 people live while seeking asylum in the U.S., while the spread of Coronavirus disease (COVID-19) continues, in Matamoros, Mexico April 9, 2020. REUTERS/Daniel Becerril

Mexican authorities approved construction of the 20-bed field hospital on April 2. But since then, a trailer laden with supplies for the project has been parked in Brownsville, Texas, less than a block from the U.S.-Mexico border.

Global Response Management, the nonprofit sprearheading the project, said the trailer contains an X-ray machine, cots, heart monitors, medical tents, generators and other equipment. Its staff fear time is running out to prepare for a coronavirus outbreak.

“If we are trying to set up the hospital in the middle of the epidemic, it’s too late,” Andrea Leiner, director of strategic planning for the organization, told Reuters.

There are no confirmed cases yet in the camp on the banks of the Rio Grande that houses about 2,000 migrants, mostly Central Americans seeking asylum in the United States. The camp also holds Cubans, Venezuelans and Mexican asylum seekers along with other nationalities.

But testing has been limited. Health experts say the migrants are exceedingly vulnerable, their immune systems worn down after months living in closely packed tents.

On April 10, the U.S. Federal Emergency Management Agency (FEMA) issued a temporary rule limiting the export of some personal protective gear needed for use within the United States.

Global Response said it believed it had to remove equipment such as gloves, surgical masks and N95 masks from the trailer in Brownsville. It is now trying to source what it can from Mexico.

Late Wednesday, the U.S. Customs and Border Protection agency said Global Response’s supplies were not subject to the FEMA order and were approved for export. But the nonprofit maintained on Thursday that it had removed some medical gear from its shipment on the advice of its U.S. customs broker, who cited guidance from border officials on the ground.

Global Response said while its shipment has been cleared on the U.S. side, it is now awaiting a letter from local Mexican government certifying that the equipment will only be brought into the country for six months, so it can be approved by Mexican customs.

Global Response tried to obtain the letter from the Matamoros mayor’s office Wednesday but was told the letter had to come from the National Migration Institute (INM), Leiner said.

Mexico’s customs agency, the Matamoros mayor’s office and INM did not respond to requests for comment.

In addition to the trailer, Global Response has collected hundreds of cloth masks sewn by volunteers for the camp, but it has only been able to bring them in three at a time, the quantity deemed for “personal use” and thus not subject to import duties in Mexico.

The group has accumulated 3,500 rapid tests for the coronavirus to use in the camp, said executive director Helen Perry.

In Matamoros, which has a population of about half a million people, the five public hospitals have 25 ventilators and 11 intensive care beds between them, according to figures provided to Reuters by the state government last month.

A Mexican government plan to relocate the asylum camp’s migrants to a stadium was abandoned, Global Response’s Leiner said.

The nonprofit and INM are now working to fence off the camp and conduct temperature checks as people enter, she said.