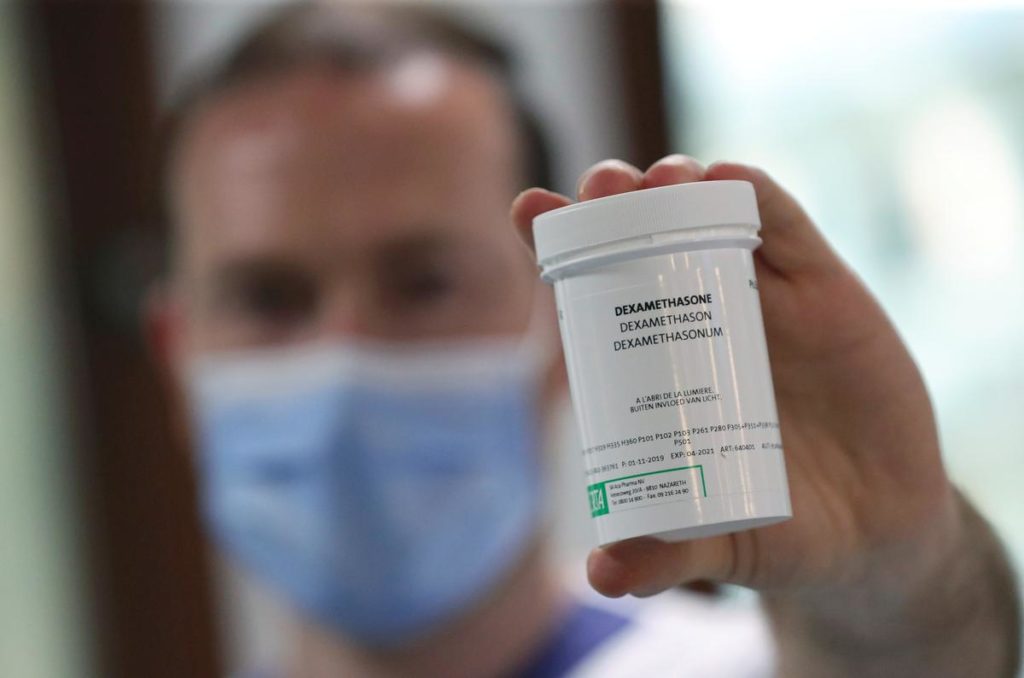 LONDON (Reuters) – A cheap and widely used steroid called dexamethasone has become the first drug shown to be able to save the lives of COVID-19 patients in what scientists said is a “major breakthrough” in the coronavirus pandemic.

A pharmacist displays a box of Dexamethasone at the Erasme Hospital amid the coronavirus disease (COVID-19) outbreak, in Brussels, Belgium, June 16, 2020. REUTERS/Yves Herman

Trial results announced on Tuesday showed dexamethasone, which is used to reduce inflammation in other diseases such as arthritis, reduced death rates by around a third among the most severely ill COVID-19 patients admitted to hospital.

The preliminary results, which have not been peer-reviewed, suggest the drug should immediately become standard care in patients with severe cases of the pandemic disease, said the researchers who led the trials.

They said they would work to publish the full details of the trial as soon as possible, and many scientists said they hope to be able to review the evidence for themselves soon, especially given the recent retraction of an influential COVID-19 study.

Britain’s health ministry wasted no time, saying the drug had been approved for use in the state-run health service, export restrictions had been introduced and 200,000 courses of the treatment had been stockpiled.

“This is a (trial) result that shows that if patients who have COVID-19 and are on ventilators or are on oxygen are given dexamethasone, it will save lives, and it will do so at a remarkably low cost,” said Martin Landray, an Oxford University professor co-leading the trial, known as the RECOVERY trial.

“For less than 50 pounds ($63), you can treat eight patients and save a life,” he said in an online briefing. One death would be prevented in every 25 COVID-19 patients on oxygen that received the drug, he calculated.

No treatment for COVID-19, the disease caused by the new coronavirus, which has killed more than 431,000 people globally, has been shown to reduce the mortality of the disease, although Gilead Sciences Inc’s (GILD.O) remdesivir shortened the recovery time for hospital patients.

“This blows remdesivir out of the water in terms of the effect size and the kind of effect,” said Dr. Mark Wurfel, professor of medicine at the University of Washington.

Wurfel cautioned that it is important that the data be released and reviewed, “but this magnitude of improvement in mortality for a critically ill population is about the largest effect size that we’ve ever seen,” he said.

“We hope the data on which these results are based will be published as soon as possible so that doctors can confidently put the treatment into practice,” said Robin Ferner, honorary professor of clinical pharmacology at University of Birmingham.

Dr. Thomas McGinn, deputy physician-in-chief at Northwell Health, New York’s largest healthcare system, told Reuters that physicians at Northwell hospitals have been using steroids on a case-by-case basis because they can suppress patients’ immune systems and possibly make them susceptible to other infections.

He said that if the data is peer-reviewed and legitimized, it could spread the use of steroids in the sickest COVID-19 patients.

“Across the country now intensivists have been using it based on their judgment calls. If this is legitimate, you may find … instead of say five out of 10 intensive-care COVID patients getting it, maybe everybody would get it,” McGinn said.

Dexamethasone is currently on the U.S. Food and Drug Administration’s list of drugs in shortage. Still several suppliers including one of the largest – Germany’s Fresenius SE (FREG.DE) – say they have the drug on the hand.

“We will seek to increase supply volumes or even production to keep up sufficient deliveries,” a Fresenius spokesman told Reuters.

Among patients with COVID-19 who did not require respiratory support, there was no benefit from treatment with dexamethasone.