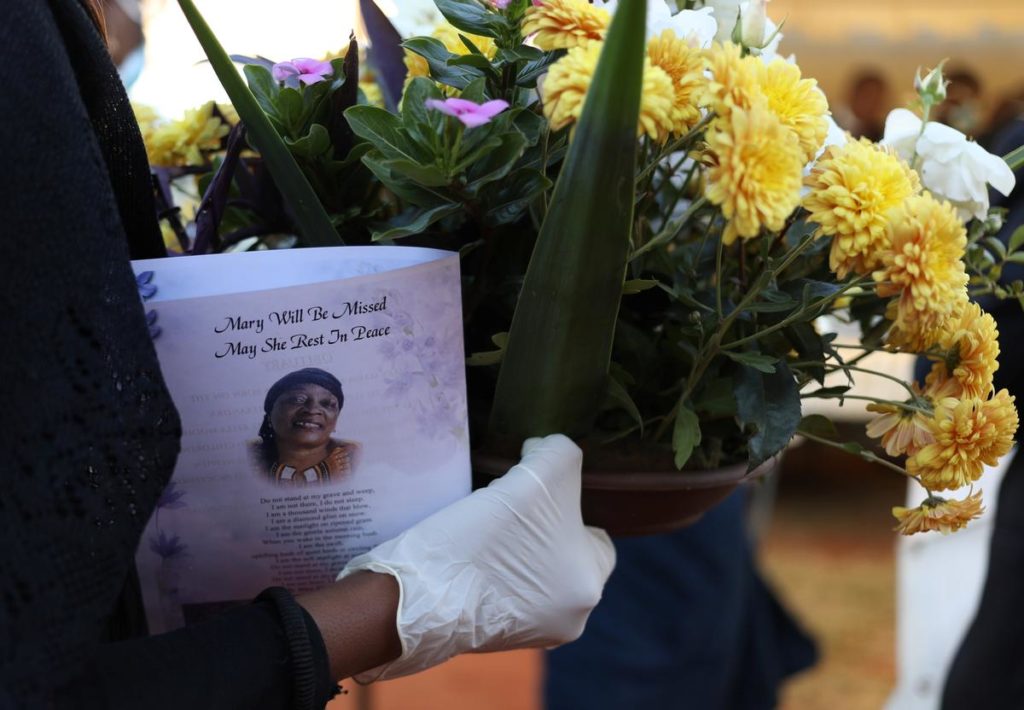 SOWETO, South Africa (Reuters) – Maaki Modimola sways along to a hymn in the yard of her dead sister’s home in the South African township of Soweto, a bottle of sanitiser swinging in her hand.

A mourner carries flowers and a programme during the funeral service of 63-year-old Mary Modimola, as centuries-old cultural traditions at funerals are being forgone due to the outbreak of the coronavirus disease (COVID-19), in Soweto, South Africa, April 24, 2020. REUTERS/Siphiwe Sibeko

Later at the cemetery, mourners sit on chairs spaced one metre apart. The usual choir is replaced by a recorded track blaring out of a single speaker. Maaki’s sister Mary did not die from COVID-19, but its influence is everywhere in the ceremony.

Township funerals are usually much more extravagant affairs. But, like grieving families across South Africa and beyond, Maaki and her relatives had to scale back their plans and forgo some cherished traditions to comply with coronavirus restrictions.

Vigils before interment have been banned. Funerals are limited to 50 mourners – still more than the 20 allowed in Nigeria or the 15 in Kenya.

Maaki had wanted to help prepare Mary’s body, but the funeral director said that was not possible.

“I would have loved to … make her beautiful, put make-up on her face, doll her up the way she liked, “ Maaki said after the service.

The infection has now spread across the continent, overturning a myriad of traditions and social norms in its wake.

More than 3,500 miles (5,500 km) away from Soweto in Cameroon’s commercial capital Douala, Constantin Size’s uncle died from a COVID-19 related condition, and was buried the same day without full ceremony.

In any other time, Samuel Wambe – a village noble, businessman and football manager – would have been taken back to his village, Size said.

In most regions of Cameroon, people usually gather for funeral events that can last days, even weeks. But the transportation of corpses and big burial ceremonies have been banned, and people are interred quickly.

“My uncle belonged to the class of nobles called ‘Suinfo’ (friend of the king). Only the initiated are allowed to attend his burial, with rituals aimed to accompany his soul to the creator,” Size said.

“It is absolutely necessary to do these rituals, if not it will have repercussions on the family lineage.”

It is a delicate balance for authorities: dealing with the pandemic, while respecting customs over the treatment of the dead.

Last month the county governor of western Kenya’s Siaya County, Cornel Rasanga, apologised after a video was posted online showing health ministry personnel in white protective gear dropping a body into a shallow grave in the dark as relatives wailed.

Back in South Africa, some in the Zulu culture believe proper custom needs to be followed or spirits will not rest.

“The spirit of the deceased will come back to haunt the living – that’s the belief, that their spirit will wander because they didn’t have that respect and that dignity during the process,” said Professor Sihawukele Ngubane who teaches at the University of KwaZulu-Natal.

Miles away in Soweto, the scaled-back funeral is proceeding as planned.

Some mourners wear face masks and carry white flowers. At one point, a woman reaches across the gap between the chairs to rest her hand on the shoulder of another mourner.

Similar scenes are playing out at most funerals, says Lawrence Konyana, president of the National Funeral Directors Association.

Families are paying for the basics but the big marquees and catering have been cut back, he says. Supplies of flowers have dried up as markets shut down during lockdowns.

Monageng Legue, chief executive at Sopema Funerals which organised Mary Modimola’s service, said he had seen an around 30% fall in revenues as families cut extras like a cow for slaughter.

“I am a bit saddened, that her life wasn’t celebrated by the people who knew her, some who were close to her,” Maaki Modimola said after the funeral. “But I think she is happy, wherever she is.”

Reporting by Emma Rumney in Johannesburg and Josiane Kouagheu in Douala; Additional reporting by George Obulutsa in Nairobi and Libby George in Lagos; Editing by Olivia Kumwenda-Mtambo and Andrew Heavens