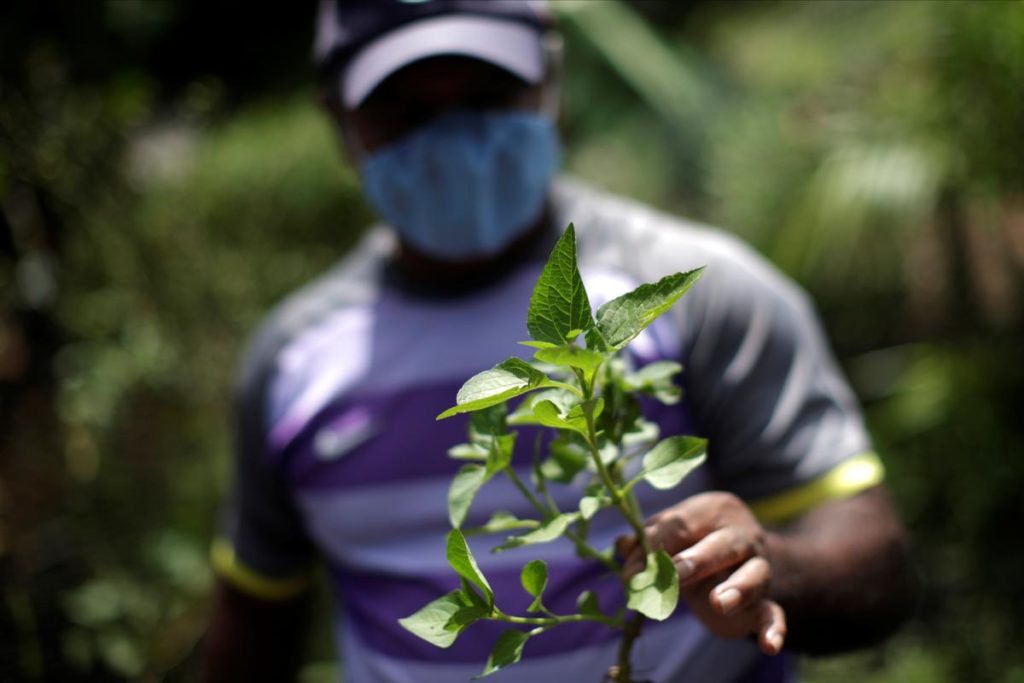 PORTEL, Brazil (Reuters) – Some villagers in the eastern Amazon are spurning Brazilian government advice to take the malaria drug hydroxychloroquine to keep the novel coronavirus at bay and are drinking tea of jambú, also known as the toothache plant.

A man holds leaves from the Jambu, a typical herb from northern Brazil, in his home near of Portel, southwest of Marajo island in Para state, Brazil, June 13, 2020. REUTERS/Ueslei Marcelino

Maria de Nazaré Sajes, 65, tested positive for the coronavirus and believes she fought off the symptoms by drinking the infusion of bitter leaves.

“I made jambú tea and felt healthy again. People said: ‘Look at Maria, how she has recovered, she no fever or pains’,” Maria said boiling water on a gas stove in her wooden house.

Her village on the banks of a tributary of the Amazon was visited by public health workers to test inhabitants for the virus that is ravaging Brazil in the world’s second worst outbreak after the United States.

U.S. regulators withdrew approval this week for the emergency use of hydroxychloroquine to treat patients with COVID-19, the disease caused by the new coronavirus. It is still being prescribed in Brazil as scientists around the world are working to develop a vaccine and effective treatments.

In remote corners of the Amazon rainforest, where access to intensive care wards can require long boat rides to the nearest cities, prevention is paramount, and people there place their faith in traditional herbal medicines.

Nurse Marilia Costa says there is resistance to taking hydroxychloroquine.

“We are seeing that most inhabitants here are taking home-made remedies that they believe have great curing qualities,” she said. “They accept pills for fever, but they take it with their own local medicine.”

Jambú leaves are used in local dishes, but said to work as an anesthetic that helps relieve pain, besides other properties fighting viruses and use as a laxative or aphrodisiac.

“I’m afraid to go to hospital because there would be no natural medicine that we find here,” said a young woman called Maria Claudia. “They wouldn’t allow me to have jambú tea there.”