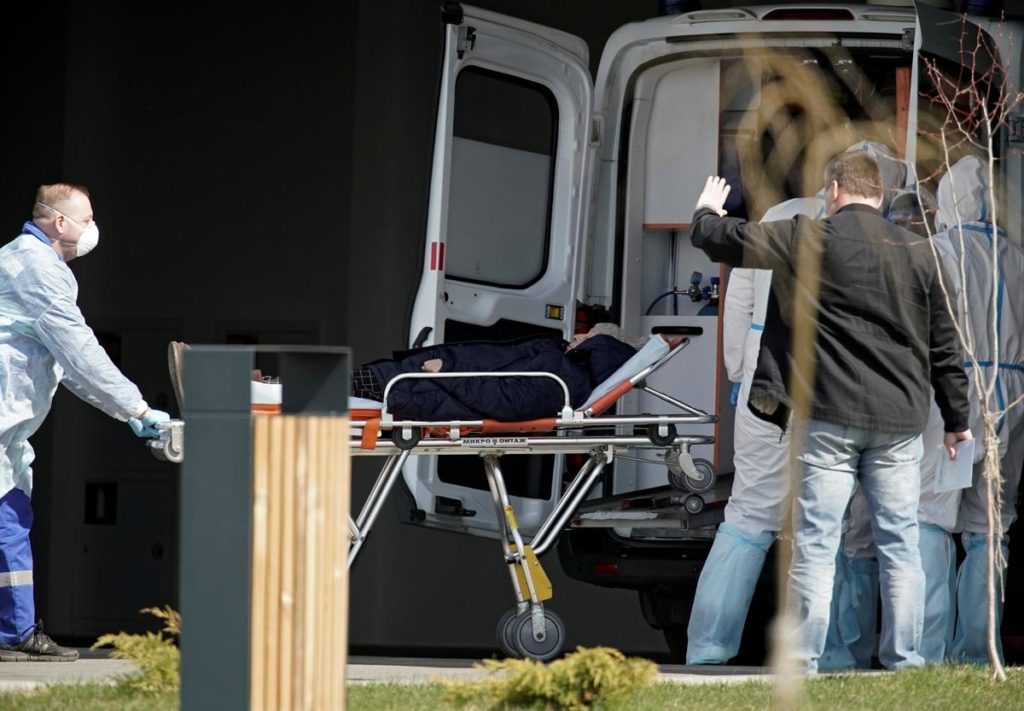 Russia at risk of spike in coronavirus cases during May holidays: official

MOSCOW (Reuters) – Russia could experience a spike in cases of the new coronavirus if people flout lockdown measures during public holidays scheduled for early May, a top health official said on Sunday.

FILE PHOTO: Medical specialists transport a person on a stretcher into an ambulance outside a hospital for patients infected with the coronavirus disease (COVID-19) on the outskirts of Moscow, Russia April 21, 2020. REUTERS/Tatyana Makeyeva

The number of coronavirus cases in Russia began rising sharply this month, reaching more than 80,000 on Sunday after a record 6,361 new cases were registered over the past day.

Anna Popova, head of Russia’s consumer health watchdog, said the country had so far avoided a spike in cases and could continue to do so “if only we do not give up during the holidays”.

“That is the biggest risk today,” Popova said in an interview on state television, Russian news agencies reported.

Russia only has a handful of working days between May 1 and May 11 this year, with back-to-back long weekends for the Labour Day and Victory Day state holidays. Many Russians typically take the entire period off work for travel or family holidays.

Russia, which has so far recorded 747 coronavirus-related deaths, has declared lockdowns across the country, including in the capital Moscow, the area worst-affected by the virus.

Muscovites are only allowed to go out to buy food or medicines at their nearest shop, get urgent medical treatment, walk their dog, or take out the trash. They must apply for a digital permit for any other movement across the city.

Popova urged Russians to remain home during the holidays in a bid to help stem contagion.

“We owe it to ourselves and our loved ones,” she said.

President Vladimir Putin announced this month that Russia would postpone its May 9 celebrations, including a massive military parade across Red Square to mark 75 years since the Soviet victory in World War Two.

The Ministry of Defence said on Sunday that 874 troops had tested positive for the virus since March, as well as 779 cadets and students of military academies across the country.

The ministry said earlier this week it had ordered thousands of troops to remain in quarantine for two weeks after the Red Square military parade was called off. [L8N2C83HF]

Next week Putin will address the measures needed to curb the spread of the coronavirus, Kremlin spokesman Dmitry Peskov said on Sunday, Russian news agencies reported.