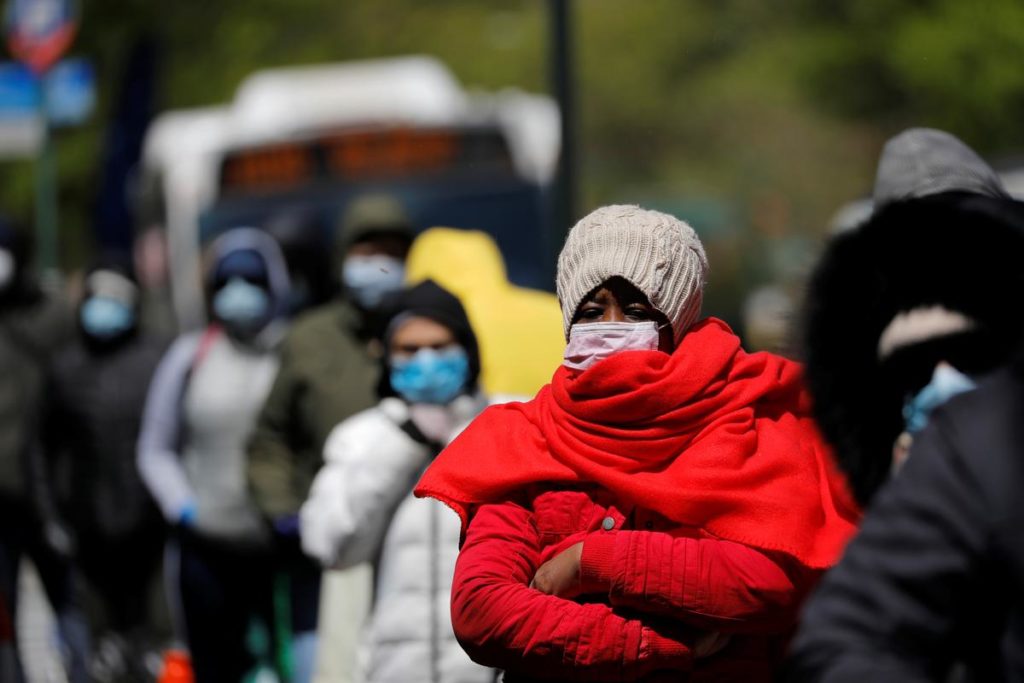 (Reuters) – Three children in New York have died from a rare inflammatory syndrome believed to be linked to the novel coronavirus, Governor Andrew Cuomo said on Saturday, a development that may augur a pandemic risk for children.

People queue to collect food distribution at Harlem’s Community Kitchen and Food Pantry service by the Food Bank for New York City during the outbreak of the coronavirus disease (COVID-19) in the Manhattan borough of New York City, U.S., May 9, 2020. REUTERS/Andrew Kelly

Cuomo had on Friday disclosed the death of a 5-year old linked to the coronavirus and a syndrome that shares symptoms with toxic shock and Kawasaki disease, which was the first known fatality tied to the rare illness in New York.

The governor told a daily briefing on Saturday that the illness had now taken the lives of at least three young people across the state. He did not provide details of their ages or the circumstances of their deaths.

But Cuomo said he was increasingly worried that the syndrome posed a newly emerging risk for children, who had previously been thought to be largely immune to severe illness from COVID-19, the respiratory disease caused by the virus.

He said state health officials were reviewing 73 cases where children exposed to COVID-19 also exhibited symptoms of the syndrome, which he said included inflammation of the blood vessels, which in turn could cause heart problems.

Cuomo said the children happened to test positive for COVID-19 or the antibodies against it, “but those were not the symptoms they showed when they came into the hospital system.”

Calling it a “truly disturbing” development, the governor said people had been laboring under the impression that young people were not at risk from the coronavirus.

“We are not so sure that is the fact anymore,” he said. “It’s very possible that this has been going on for several weeks and it hasn’t been diagnosed as related to COVID.”

Cuomo said New York’s health department had partnered with the New York Genome Center and the Rockefeller University to look at whether there is a genetic basis for the syndrome, cases of which were first reported in Britain, Italy and Spain.

And he said the federal Centers for Disease Control and Prevention had asked New York to develop national criteria for identifying and responding to the syndrome.

The syndrome shares symptoms with toxic shock and Kawasaki disease, which is associated with fever, skin rashes, swelling of the glands, and in severe cases, inflammation of arteries of the heart. Scientists are still trying to determine whether the syndrome is linked with the new coronavirus because not all children with it have tested positive for the virus.

New York is the epicenter of the pandemic in the United States, accounting for more than a third of the 77,313 American deaths from COVID-19, according to a Reuters tally.

Cuomo said 226 New Yorkers died from COVID-19 on Friday, up from 216 a day earlier, but less than half the levels recorded two weeks ago. He said hospitalizations and intubations continued their downward trend, further evidence the state has gained a measure of control over the virus.