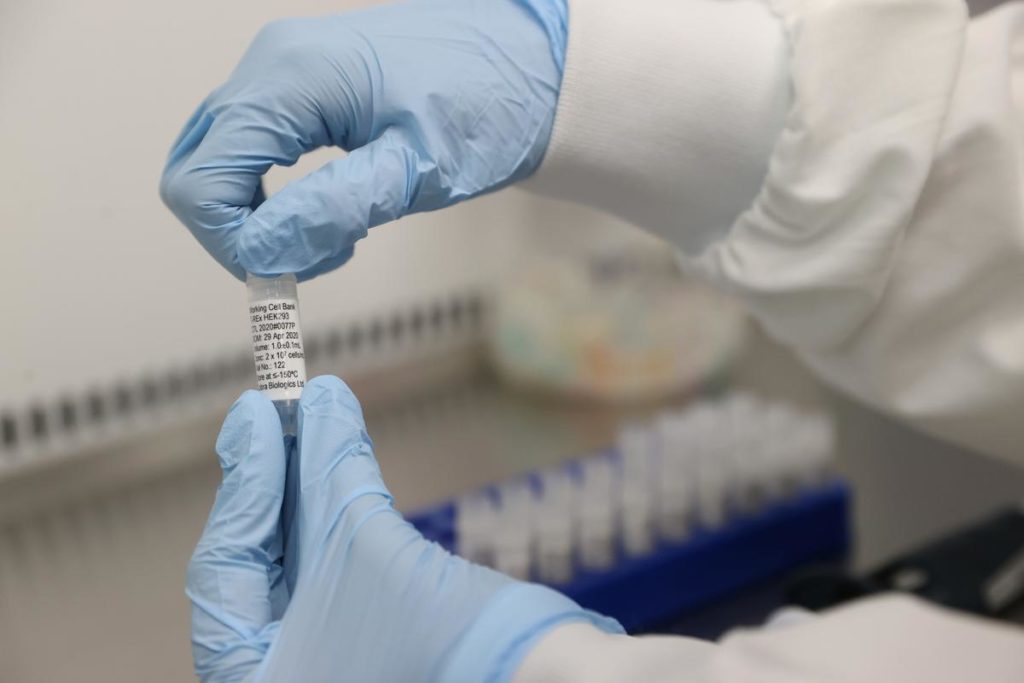 LONDON (Reuters) – A manufacturer of a possible COVID-19 vaccine being developed by British scientists said on Friday it may know by the end of May if it can make a million doses a month with a view to building stocks for commercial supply when the vaccine is approved.

Scientists are seen working at Cobra Biologics, they are working on a potential vaccine for COVID-19, following the outbreak of the coronavirus disease (COVID-19), in Keele, Britain, April 30, 2020. REUTERS/Carl Recine

Cobra Biologics is one of the firms working to make a potential vaccine known as ChAdOx1 nCoV-19 being developed by scientists at the University of Oxford.

Chief Executive Peter Coleman said the firm is not responsible for proving the efficacy of the vaccine, with those trials being run by the Oxford team, and there was a lot of risk involved in the project.

But he said that if a 200-litre manufacturing run planned for the middle of May were successful, the company would be ready to produce 1 million doses a month.

“(That’s) more than enough for clinical trials, but also potentially a start to stock up for commercial supply,” Coleman told Reuters, adding that it could have capacity for up to two million doses in repeat batches.

“The speed at which we’re operating is much quicker than it ordinarily is. And to start building up batches for commercial supply before you’ve even got to phase one (clinical trials) is pretty unusual.”

British pharmaceutical firm AstraZeneca has joined the Oxford vaccine programme to develop, produce and distribute the potential vaccine to help make it available as soon as possible if it succeeds in clinical trials.

Coleman said AstraZeneca’s involvement could help with the rapid scaling-up of the vaccine on a global stage, but said that Cobra Biologics and two other contract development and manufacturing organisations (CDMOs) with a similar capacity that were already involved would still play a pivotal role.

“The current consortium of CDMOs will be a fundamental part of the manufacturing of this vaccine. AstraZeneca has a lot of capability,” he said.

“But I think at this moment in time, given the intensity and speed that’s required, it makes common sense to stick with the CDMOs you’ve got at the moment and then at some point in the future, transition to something else,”

Coleman said that processes that might previously have taken years were being boiled down to five months, and that safety work already carried out on a Middle East respiratory syndrome (MERS) vaccine could help speed up the development of a COVID-19 vaccine.

“It’s not from a standing start. There’s been a lot of work, and the products have been modified in such a way that the safety work from the early clinical trials is equally applicable,” Coleman said.

Asked about comments by AstraZeneca CEO Pascal Soriot that it will know whether the vaccine will be effective in June or July, Coleman said that his firm was focused on the manufacture of the vaccine rather than determining its efficacy.

“I trust the university with that July outcome,” he said. “And then if it’s positive, the race is on to produce as many batches as possible.”

Previous Post Keto at Zaxby’s: What to Order + Full Macro Breakdown Next Post Are Face Shields Better Than Face Masks for Coronavirus?