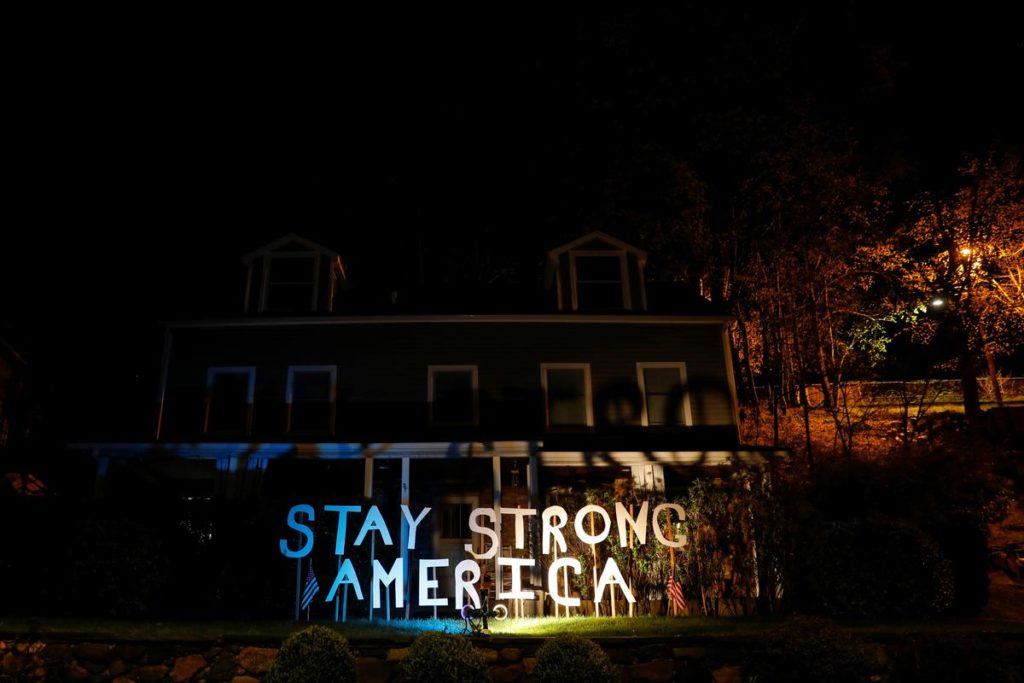 New York, California and other states plan for reopening as coronavirus crisis eases

NEW YORK (Reuters) – Seven Northeastern U.S. states and the three West Coast states banded together on Monday in regional pacts to forge coordinated, gradual economic reopenings as the coronavirus crisis finally appeared to be ebbing, while stressing the need for precautions to avoid a resurgence of infections.

Announcements from the New York-led group of East Coast governors, and a similar compact formed by California, Oregon and Washington state, came after President Donald Trump declared that any decision on restarting the U.S. economy was up to him.

Massachusetts later announced it was joining the East Coast coalition.

“Nobody has been here before, nobody has all the answers,” said Cuomo, whose state has become the U.S. epicenter of the global coronavirus pandemic, during an open conference call with five other governors. “Addressing public health and the economy: Which one is first? They’re both first.”

The three Pacific Coast states announced they, too, planned to follow a shared approach for lifting social-distancing measures, but said they “need to see a decline in the rate of spread of the virus before large-scale reopening” can take place.

The 10 governors, all Democrats except for Charlie Baker of Massachusetts, gave no timeline for ending social lockdowns that have idled the vast majority of more than 100 million residents in their states. But they stressed that decisions about when and how to reopen non-essential businesses, along with schools and universities, will put the health of residents first and rely on science rather than politics.

The announcements came as signs emerged that the crisis had peaked. At least 1,500 new U.S. fatalities were reported on Monday, far below last week’s running tally of roughly 2,000 deaths every 24 hours.

Cuomo, whose state accounts for the largest number of cumulative deaths, over 10,000, said on Monday that “the worst is over” for his state.

At least two governors of other hard-hit states – John Bel Edwards of Louisiana and J.B. Pritzker of Illinois, both Democrats – also disputed the notion that authority to lift or modify their stay-at-home orders rested with anyone but them.

Pritzker said reopening his state may occur in stages and be accompanied by new face-covering requirements in public places and workplace capacity limits. “The most important thing is safety and health,” he said.

Trump, a Republican who before the pandemic had touted a vibrant U.S. economy as the centerpiece of his November re-election bid, has pressed repeatedly in recent weeks for getting Americans back to work soon. Ahead of the governors’ announcement on Monday, he insisted he had unilateral authority for ending the lockdowns that have strangled the U.S. economy, throwing at least 17 millions Americans out of work in just three weeks.

Legal experts say the president has limited power under the U.S. Constitution to order citizens back to their places of employment, to require cities to reopen government offices and transportation, or to order local businesses to resume.

Pressed on the question of whether governors or the federal government would make the decision to re-open schools and closed businesses, Trump insisted he had ultimate authority.

“The president of the United States calls the shots,” Trump told a White House briefing after the announcements by the governors. “That being said, we’re going to work with the states.”

A sign is seen lit outside a house during the outbreak of the coronavirus disease (COVID-19) in the New York City suburb of Piermont, New York, U.S., April 13, 2020. REUTERS/Mike Segar

He did not offer specifics about his claim of authority over the states or any details of his plan to reopen the economy.

Political leaders said a reopening of the economy may hinge on more widespread testing to better determine the full extent of infections and cautioned that lifting stay-at-home orders prematurely could reignite the outbreak.

The Trump administration has signaled May 1 as a potential date for easing the restrictions.

The U.S. death toll from COVID-19, the highly infectious lung disease caused by the virus, topped 23,000 on Monday, out of more than 575,000 known U.S. infections, according to a Reuters tally. The United States, with the world’s third-largest population by country, has recorded more fatalities from COVID-19 than any other nation.

But even as the coronavirus outbreak seemed to be easing in New York – where the bulk of the deaths have been concentrated in and around New York city, Cuomo warned that gains achieved through social distancing could be undone if “we do something stupid” and relax the restrictions too quickly.

Wyoming reported its first death from the coronavirus on Monday, the final U.S. state to report a fatality.

Official statistics, which exclude deaths outside of hospitals, have understated the actual number of people who have succumbed to COVID-19, health experts said. (Graphic: tmsnrt.rs/2w7hX9T)

Regardless of the death toll, continued difficulties in ramping up diagnostic testing pose a major hurdle for public health experts in determining at what point it is safe enough to relax social distancing measures.

New York City Health Commissioner Dr. Oxiris Barbot acknowledged a “tightening” of the supply chain for the special nasal swabs needed in coronavirus testing, and said it was part of a “national and international challenge” to ramp up testing.

Chris Sununu, the Republican governor of New Hampshire, said testing for the coronavirus had improved “but we don’t have enough. Nobody has enough.”

Previous Post Greece has won a battle against COVID-19 but war is not over: PM Next Post COVID-19 Hits Physician Couple: Dramatically Different Responses