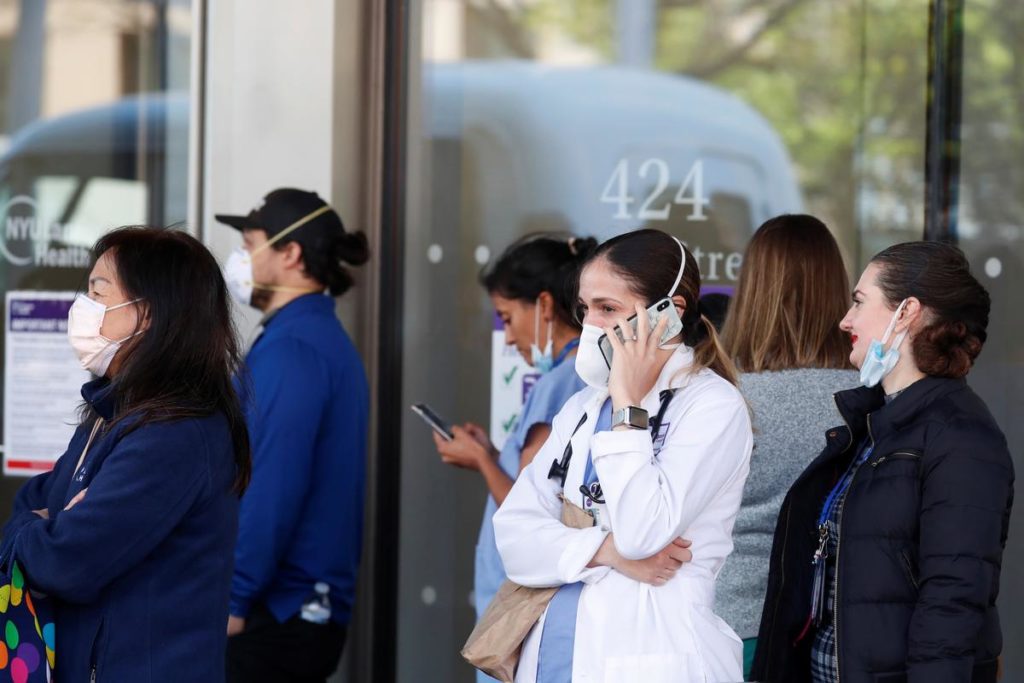 Healthcare workers from the NYU Langone Medical Center wait in line for lunch outside of the hospital as the outbreak of the coronavirus disease (COVID-19) continues in the Manhattan borough of New York, U.S., April 28, 2020. REUTERS/Lucas Jackson

(Reuters) – The number of people admitted to hospitals in New York for the novel coronavirus dropped to its lowest daily level in more than a month, the latest sign the crisis is subsiding in the hardest-hit state, Governor Andrew Cuomo said on Tuesday.

Cuomo, who has traded barbs with U.S. President Donald Trump over who was to blame for the crisis, also appeared to criticize federal agencies, the intelligence community and the press while saying the primary responsibility did not lie with the states.

“Where was everyone?” Cuomo asked rhetorically at a daily briefing, referring to the initial response after it emerged that China was grappling with a deadly virus that could arrive in the United States. “Governors don’t do global pandemics.”

Cuomo said the three-day rolling average for COVID-19, the disease caused by the new coronavirus, fell below 1,000 to a level not seen since March 24. Intubations and total hospitalizations also fell, he said.

With such metrics on an improving trend, Cuomo has in recent days shifted his focus to reopening his state, which is in lockdown until at least May 15. Cuomo has said he would reopen regions with fewer COVID-19 cases more quickly than areas like New York City, the epicenter of the crisis in the United States.

Cuomo said regions wanting to reopen would depend on having hospital bed utilization below 70% of capacity and a transmission rate below 1.1 – that is, every infected person would be transmitting the virus to 1.1 others on average. These thresholds would be below the levels at which the virus is spreading rapidly, indicating relative safety in the gradual reopening of schools or businesses.

He disclosed plans to have 30 contact tracers for every 100,000 people, implying a need to secure 5,700 workers based on the state’s population of 19 million people. Contact tracers, who track down everyone that an infected person has interacted with so that they, too, can be monitored and isolated, are seen as key to preventing outbreaks.

reporting by Nathan Layne in Wilton, Connecticut and Maria Caspani and Jessica Resnick-Ault in New York; Editing by Bernadette Baum