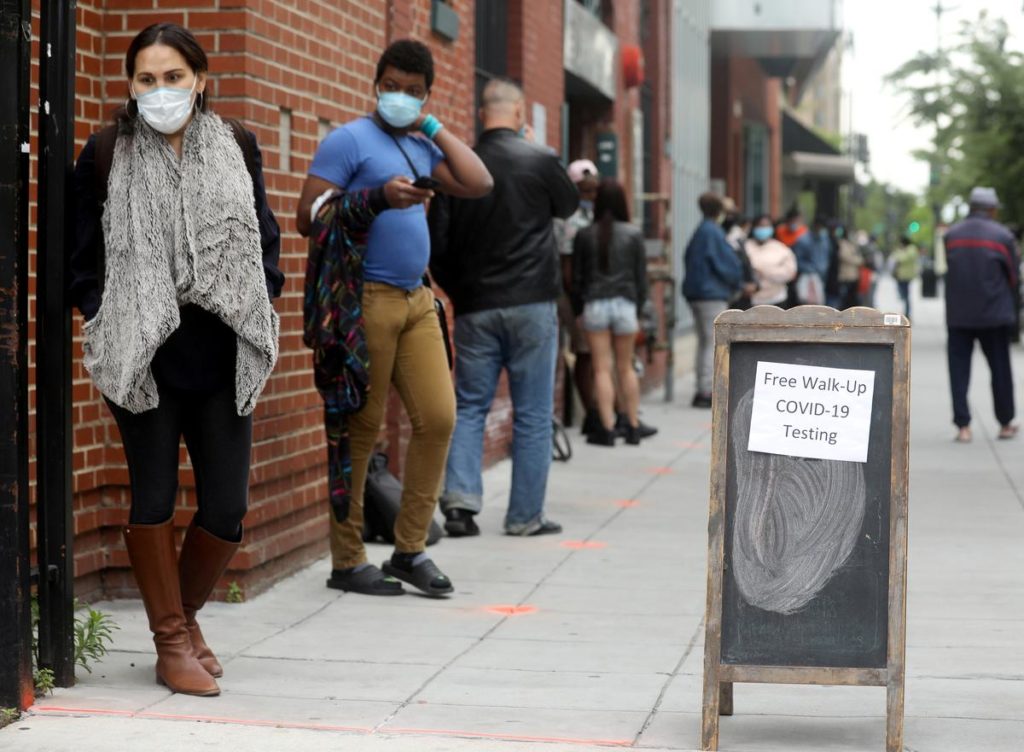 SACRAMENTO, Calif. (Reuters) – Three-quarters of Americans would take a coronavirus vaccine after receiving certain assurances that it was safe, and another 9% would take one as soon as it was available, a Reuters/Ipsos poll released Tuesday showed.

FILE PHOTO: People keep a social distance as they wait in line for free walk-in coronavirus testing at the Bread for the City social services charity during the coronavirus disease (COVID-19) outbreak, in Washington, U.S. May 5, 2020. The charity is able to test about 100 people each week. REUTERS/Jonathan Ernst

The strong support for a vaccine comes as vocal anti-vaccination protesters joined right-leaning groups to protest shelter-at-home orders imposed by public health officials in the wake of the coronavirus pandemic in the United States.

Development of a safe and effective vaccine is widely believed by public health officials to be key to controlling future outbreaks, but it is not clear how long that process would take – or if a vaccine can even be developed for the virus.

Asked to choose one or more reasons they would feel comfortable taking a new vaccine, about 40% of American adults surveyed in the Reuters/Ipsos study said they would wait until the U.S. Food and Drug Administration approved such a vaccine, and 38% said they would try one after extensive, peer-reviewed clinical trials.

About 38% said they would wait until such a vaccine had already been taken by much of the public and proven safe. A smaller number, about 6%, said they would take a coronavirus vaccine after a friend or family member tried it, and the same number said they would try it if President Donald Trump were to endorse it.

Among those who were willing to be vaccinated against the virus, 89% would do so if it was made in the United States, and 11% said they would take it if it were developed in another country.

“A vaccine would be an important tool, because I don’t think the virus is going to disappear,” said Arthur Reingold, head of epidemiology and biostatistics at the University of California, Berkeley’s School of Public Health.

But he cautioned that people’s willingness to take a vaccine will vary depending on what happens as time progresses.

“If there is a raging epidemic going on and bodies are piling up all over the place they’re probably going to be more likely to get the vaccine,” he said.

The highly contagious coronavirus has infected more than 1.2 million people in the United States, including at least 70,000 who have died from COVID-19, the respiratory illness it causes, according to a Reuters tally.

The Reuters/Ipsos poll was conducted online, in English, throughout the United States. It gathered responses from 1,215 American adults, including 1,015 who identified as registered voters. It has a credibility interval, a measure of precision, of plus or minus 3 percentage points.