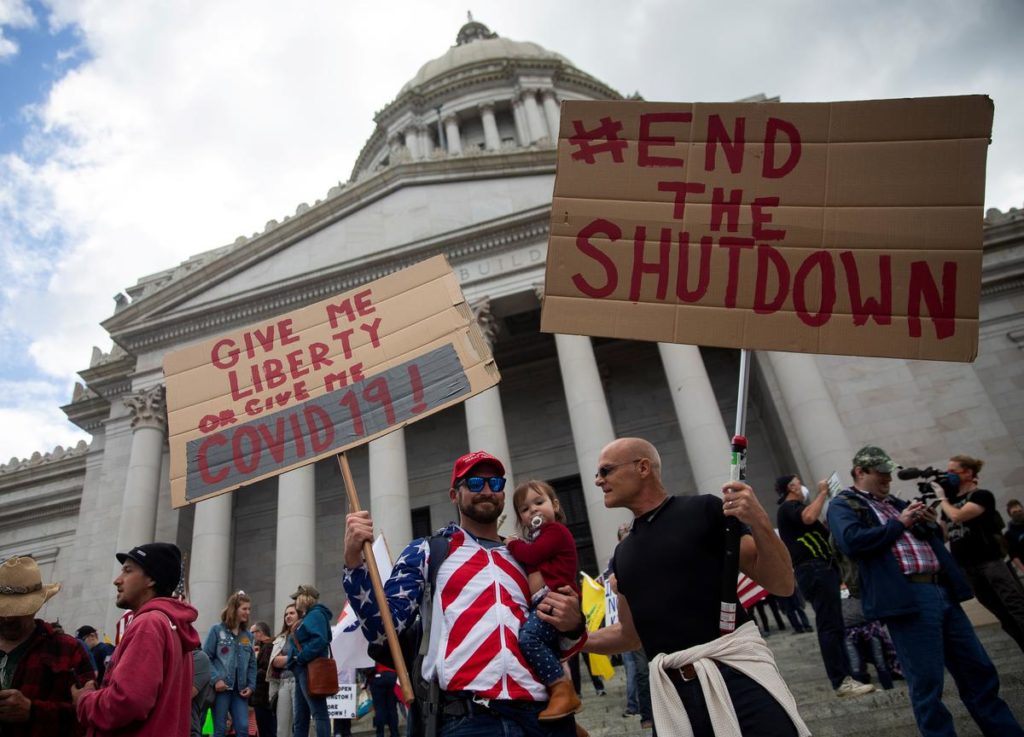 (Reuters) – Protests flared in U.S. states on Sunday over stay-at-home orders while governors disputed President Donald Trump’s claims they have enough tests for the novel coronavirus and should quickly reopen their economies.

An estimated 2,500 people rallied at the Washington state capitol in Olympia to protest Democratic Governor Jay Inslee’s stay-at-home order, defying a ban on gatherings of 50 or more people.

Despite pleas from rally organizers to wear face coverings or masks as public health authorities recommend, many did not.

“Shutting down businesses by picking winners and losers in which there are essential and non-essential are violations of the state and federal constitution,” rally organizer Tyler Miller, 39, an engineer from Bremerton, Washington, told Reuters.

In Denver, hundreds of people gathered at the state capitol to demand the end to Colorado’s shutdown. As protesters clogged streets with cars, healthcare workers in scrubs and face masks stood at intersections in counterprotest.

Stay-at-home measures, which experts say are essential to slow the spread of the virus, have battered the U.S. economy and more than 22 million Americans have filed for unemployment benefits in the past month. Demonstrations to demand an end have previously erupted in a few spots in Texas, Wisconsin and the capitols of Ohio, Minnesota, Michigan and Virginia..

“These people love our country,” Trump, who has touted a thriving economy as the best case for his re-election in November, told a briefing in Washington on Sunday. “They want to get back to work.”

In New York, the U.S. epicenter of the pandemic, hospitalizations continued decline to 16,000 from a high of 18,000, and the number of patients being kept alive by ventilators also fell. There were 507 new deaths from COVID-19, the respiratory illness caused by the coronavirus, down from a high of more than 700 a day.

“If the data holds and if this trend holds, we are past the high point and all indications at this point are that we are on a descent,” Governor Andrew Cuomo said at a daily briefing, while urging residents to continue social distancing.

To get a baseline of how many people were infected with the novel coronavirus, Cuomo said the state would do the most aggressive anti-body testing in the nation in the next week using a random sample.

Two men hold signs as they protest against the state’s extended stay-at-home order to help slow the spread of the coronavirus disease (COVID-19) as hundreds gather to demonstrate at the Capitol building in Olympia, Washington, U.S. April 19, 2020. REUTERS/Lindsey Wasson NOT ENOUGH TESTS

The United States has by far the world’s largest number of confirmed coronavirus cases, with more than 750,000 infections and over 40,500 deaths, according to a Reuters tally.

Cuomo, along with other governors, are clamoring for more tests to detect new infections as well as to test for immunity as part of their plans to reopen their states.

Republican Governor Larry Hogan of Maryland during a CNN interview said claims by Trump and Vice President Mike Pence that states have plenty of tests were “just absolutely false.”

The region of Maryland, Virginia and Washington D.C. is still seeing increasing cases. New Jersey reported on Sunday that its new cases rose by nearly 3,900, the most in more than two weeks. Boston and Chicago are also emerging hot spots with recent surges in cases and deaths.

Several states, including Ohio, Texas and Florida, have said they aim to reopen parts of their economies, perhaps by May 1 or even sooner.

The governors of Michigan and Ohio on Sunday said they could double or triple their testing capacity if the federal government helped them acquire more swabs and reagents, chemicals needed as part of the testing process.

Trump’s guidelines to reopen the economy recommend a state record 14 days of declining case numbers before gradually lifting restrictions. Yet the Republican president appeared to encourage protesters who want the measures removed sooner with a series of Twitter posts on Friday calling for them to “LIBERATE” Michigan, Minnesota and Virginia, all run by Democratic governors.

Inslee of Washington redoubled his attacks on Trump’s call to “liberate” states, saying the president was encouraging people to violate state laws on self-isolating.

“These orders actually are the law of these states,” he said. “To have an American president encourage people to violate the law, I can’t remember any time during my time in America where we have seen such a thing.”

U.S. lawmakers are nearing an agreement on approving extra money to help small businesses hurt by the coronavirus pandemic and could seal a deal as early as Sunday, congressional and Trump administration officials said.

Congress established the program last month as part of a $2.3 trillion coronavirus economic relief plan, but it has already run out of money.

Graphic: Tracking the novel coronavirus in the U.S., tmsnrt.rs/2w7hX9T