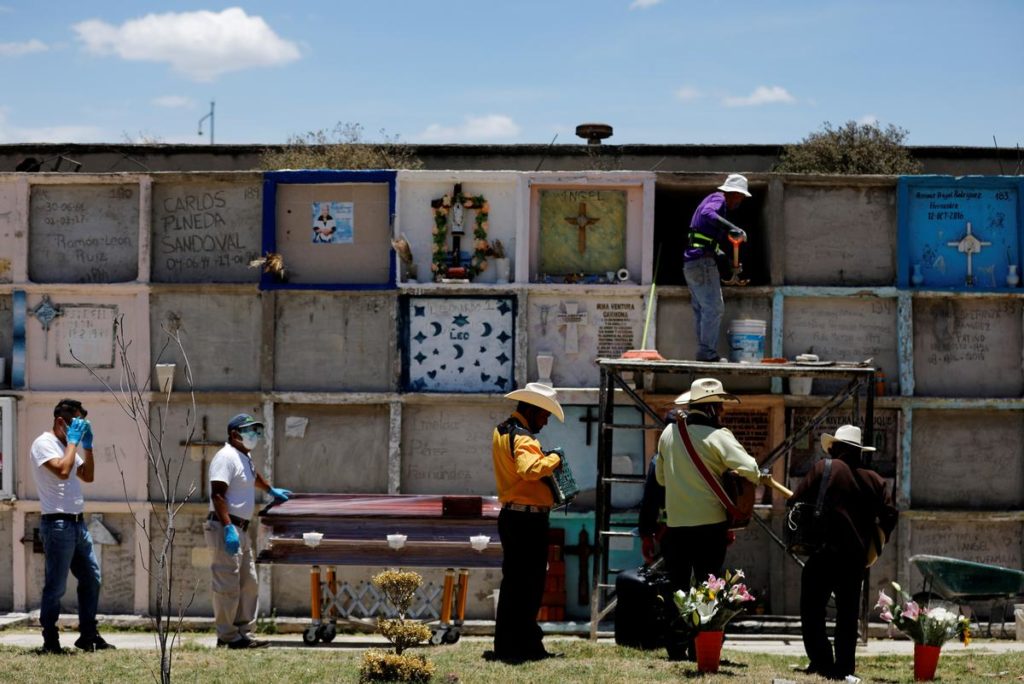 MEXICO CITY (Reuters) – Mexico went into the coronavirus outbreak insisting it would beat the pandemic without mass testing, but with deaths surging as it prepares to exit lockdown, the strategy looks increasingly untenable.

FILE PHOTO: Funeral workers stand by the coffin of a woman, who died of the coronavirus disease (COVID-19), as musicians stand next to them at the Municipal cemetery in Nezahualcoyotl, State of Mexico, Mexico June 12, 2020. REUTERS/Carlos Jasso/File Photo

Mexico’s coronavirus czar, Deputy Health Minister Hugo Lopez-Gatell, has doggedly eschewed widespread testing for new cases in favor of a lighter regime based on a model drawn up over a decade ago, arguing it made more efficient use of medical resources.

Yet as deaths and cases mount, Lopez-Gatell has repeatedly backpedaled on when the pandemic would peak, prompting opposition-run states to test more to see how widely the virus has spread.

Government allies are also breaking ranks, and even President Andres Manuel Lopez Obrador, who has faced criticism for downplaying the severity of the pandemic, has hinted he backs a broader approach to testing.

“How can you end a lockdown when you don’t have clear data, and the number of dead continues to rise?,” Lorena Villavicencio, a federal congresswoman for the ruling National Regeneration Movement (MORENA), told Reuters.

MORENA Senate leader Ricardo Monreal has been among those calling for more tests.

As well as playing down the need for mass testing, the government was slow to decentralize diagnostics, doctors say. Now that more private medical centers run tests, thousands of new cases are emerging, and not all appear in federal numbers.

With an official tally of over 17,500 fatalities, Mexico has the seventh-highest coronavirus death toll in the world. But it also has one of the lowest rates of testing, according to Our World in Data, a research group at Oxford University.

Two days after a phased exit from lockdown began on June 1, Mexico logged its highest daily death toll, more than doubling the previous record to nearly 1,100.

The next morning, Lopez Obrador pointedly reminded the public the government’s strategy was the work of Lopez-Gatell and Health Minister Jorge Alcocer.

“All the management of the process to tackle the pandemic was in their hands,” he said. “They’re the ones who have drawn up all the steps. We’ve moved in accordance with their recommendations.”

The president also said he was open to more testing.

But he still defends the government’s approach, noting Mexico has suffered far fewer deaths than the United States, where more than 116,000 people have died.

Central to Mexico’s initial strategy was using a so-called Sentinel model established in 2006 to track flu-like diseases via a network of 475 medical monitoring stations.

The model, said Lopez-Gatell, allowed Mexico to make projections with partial data like an “opinion poll.”

But the model was not designed for the new virus and the monitoring stations were not set up to provide a representative overview of Mexico, said former health minister Salomon Chertorivski.

“If you want to monitor a new pandemic in real time, it simply gives you very limited information,” he said.

Arguing that exhaustive mapping was unrealistic, Lopez-Gatell has focused on conserving medical facilities for the most needy, and encouraging the public to self-isolate.

That has helped manage hospital saturation, but also means some people cannot get help until it is too late, critics say. The government denies this.

Daniel Diaz, health minister of Guanajuato state, said the strategy also overlooked asymptomatic carriers, who made up one in five of all cases in his state. Many of them did not take social distancing seriously until they had been tested, he said.

The WHO is still debating how important asymptomatic carriers are in the pandemic.

Opposition-run states in northern and central Mexico have led the charge toward a more comprehensive testing scheme, working jointly to share information and collaborating with the private sector.

Without more tests, it becomes harder for authorities to ease travel restrictions, said Sergio Gonzalez, health minister of Durango, one of the states.

The drive has also tapped foreign help. Executives at Korean automaker Kia in the northern city of Monterrey, for instance, in April put officials in Nuevo Leon state in touch with South Korean doctors for training on how to deal with coronavirus.

Nuevo Leon later brought in officials from neighboring Tamaulipas and Coahuila states for the training sessions.

“(Getting) the stamp that allows you to do the testing was a real hassle,” he said.

Now, with private help, Nuevo Leon and Coahuila alone have conducted 40,000 tests and confirmed some 3,000 cases not in federal totals, official registers show.

Last week, according to the federal government’s count, Mexico was conducting 12,000 tests a day. That is three times the daily number of tests during the first week of May, when Lopez-Gatell initially forecast the pandemic would peak, but far short of what critics would like.

Mexico City has also changed tack to track cases and isolate asymptomatic carriers, local health minister Oliva Lopez told a news conference last week. Over the next month, she wants the city governed by MORENA to do 2,700 tests a day, up from 1,000 now.

Sitting beside her was Lopez-Gatell, who stuck to his guns and said what mattered was not the volume of tests, but how they were used.

“There’s no scientific, technical, logical or automatic link between the number of tests and success in control,” he said.

That view seemingly jars with the World Health Organization (WHO), which has repeatedly pushed for more testing.

At a briefing in Geneva on June 6, WHO spokeswoman Margaret Harris urged authorities to “test, test, track, test – find everybody who has potentially got the virus.”

The government has also had to contend with a president whose instincts do not always encourage social distancing or containment.

Initially, Lopez Obrador urged people to hug each other and keep going out. Later, he told them to stay at home.

When the head of Mexico’s Social Security Institute said on June 7 he had coronavirus, two days after speaking at an event with the president, Lopez Obrador dismissed the idea that he, too, should take a test.

“I’ve already explained,” he told reporters. “I’m not doing the test because I don’t have symptoms.”

Previous Post What Happens to Your Kidneys as You Age? Next Post Female Athletes Shortchange Themselves on Nutrition