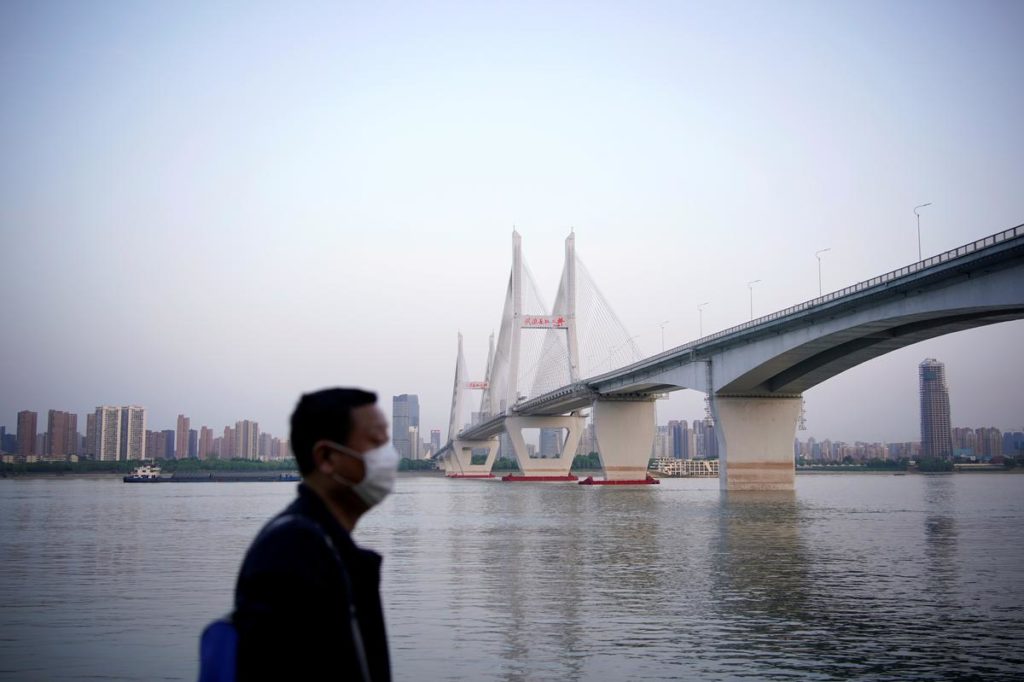 Latest on the worldwide spread of the new coronavirus

(Reuters) – More than 3.89 million people have been reported to be infected by the novel coronavirus globally and 269,840 have died, according to a Reuters tally, as of 1248 GMT on Friday.

FILE PHOTO: A man wearing a face mask is seen under a bridge of Yangtze river in Wuhan after the lockdown was lifted in Wuhan, capital of Hubei province and China’s epicentre of the novel coronavirus disease (COVID-19) outbreak, April 15, 2020. REUTERS/Aly Song/File Photo

* Russia’s cases rose by over 10,000 for the sixth straight day, bringing the nationwide tally to 187,859. Around 100 central bank employees have been diagnosed, most of them in Moscow.

* A German intelligence report casts doubts on U.S. allegations that COVID-19 originated in a Chinese laboratory and says the accusations are an attempt to divert attention from U.S. failure to rein it in, Der Spiegel magazine reported.

* Ireland’s unemployment rate shot up to 28.2% at the end of April including those receiving emergency assistance, the highest rate on record.

* Switzerland said it will further ease curbs on migration from Europe.

* Danish museums, amusement parks and cinemas will be allowed to reopen from June 8, the government said.

* The U.S. economy lost 20.5 million jobs in April, the steepest plunge since the Great Depression.

* Mother’s Day, considered one of the most important dates in the Mexican social calendar, coincides with what health officials have calculated as the peak of the spread.

* Residents in an impoverished part of the Honduran capital, Tegucigalpa, clashed with riot police after blocking the burial of a suspected coronavirus victim.

* Brazil’s Health Ministry on Thursday registered 9,888 new cases, bringing its total to 135,106 with 9,146 deaths – the most deadly outbreak in an emerging market nation.

* The death toll in the worst hit part of Brazil’s remote Amazon region may be three times the official count, as the pandemic overwhelms the public health system.

* Peruvian miners are set to restart operations in coming days and ramp up to around 80% of normal production levels within a month, a senior official said, as the world’s No. 2 copper producing country looks to rebound.

* Argentina will get $1.8 billion in loans from the Inter-American Development Bank this year to help create jobs and provide medical care to coronavirus victims, the government said. An IMF spokesman said it is hopeful Argentina can restore debt sustainability.

* The World Bank approved $506 million in emergency loans and grants for Ecuador to help it grapple with one of the worst outbreaks in Latin America.

* China is open to an independent investigation to determine the origins of the coronavirus, its ambassador to Berlin said amid U.S. allegations that it came from a laboratory.

* South Korean health authorities are investigating a small but growing outbreak centred in a handful of Seoul nightclubs, as the country moves to less restrictive measures.

* An Indian train killed 16 migrant workers who had fallen asleep on the track while heading back to their home village after losing their jobs during the lockdown, police said.

* Cases in Pakistan surged past 25,000 on Friday, just hours before the government was due to lift lockdown steps.

* Malaysia’s Prime Minister Muhyiddin Yassin will face a confidence vote on May 18.

* Two weeks after Indonesia banned air and sea travel, the transport ministry has confirmed that flights and public transport will conditionally resume.

* Australia will ease social distancing restrictions in a three-step process, its prime minister said as Canberra aims to remove most curbs by July and get nearly 1 million people back to work.

* The coronavirus could kill between 83,000 and 190,000 people in Africa in the first year and infect between 29 million and 44 million in the first year if it is not contained, said the World Health Organization.

* South Africa’s president said some low-risk prisoners would be granted parole to help curb the spread in correctional facilities.

* Madagascar is putting its self-proclaimed, plant-based COVID-19 “cure” on sale and several African countries have already put in orders, despite WHO warning that its efficacy is unproven.

* The ECB asked staff to study whether it should buy “junk” corporate bonds to fight the pandemic fallout, sources told Reuters.

* Japan will look into additional steps to cushion the economic blow, its economy minister said on Friday, signalling that more stimulus measures could be forthcoming.

* German exports fell by 11.8% in March, their steepest drop since current records began in 1990, the Federal Statistics Office said.