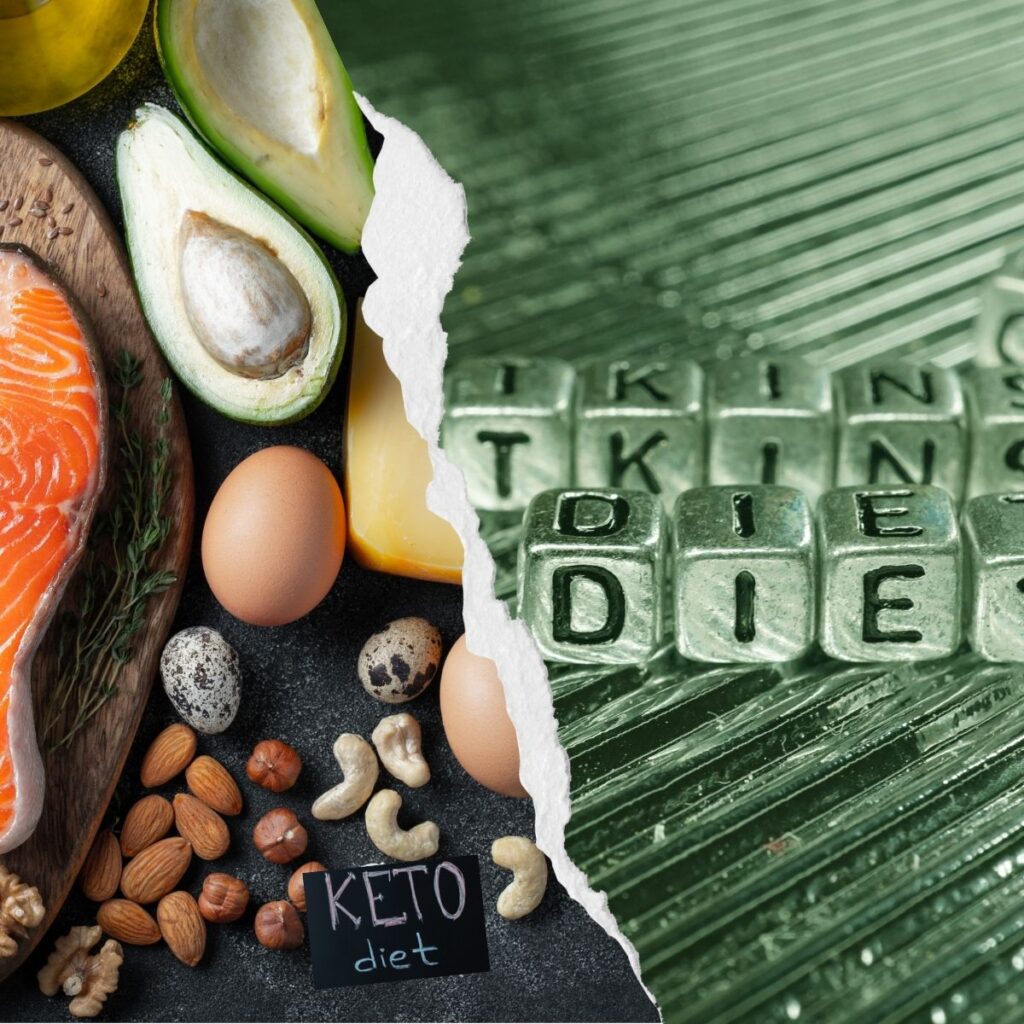 Keto and Atkins are both low-carb diets. Most people today follow them with the goal of losing weight but also to improve health.

Some believe these two low-carb approaches are practically one and the same, wondering if there are any differences between keto vs. Atkins.

In short, they do have quite a few differences as much as things in common.

Keto and Atkins have different metabolic effects, at least in the long term. How each approaches carb reduction is also quite different.

Knowing these differences, as well as their similarities and proven benefits, can help you in deciding which one is best for you.

What Is the Keto Diet?

The ketogenic diet (keto, for short) is a low-carb, high-fat diet that scientists developed in the early 20th century to help treat epilepsy.

Back then, a team at the Mayo Clinic discovered that acidic molecules called ketones, which are normally produced during fasting, reduce seizures. They also found that restricting carbs had the same effect, and so, the keto diet was born.

Decades later, keto grew in popularity as a weight-loss and health-boosting diet. It’s one of the most popular diets today. Case in point: there are over 20 million posts under the hashtag “keto” on Instagram as of today.

With keto, your main focus is restricting carbs to 20-50g per day as well as eating within a specific macronutrient ratio:

To achieve this ratio, you will need to eliminate foods like bread, pasta, honey, and even bananas while basing your diet around keto-friendly foods like eggs, butter, avocados, nuts, and seeds.

What Is the Atkins Diet?

The Atkins diet is a low-carb diet invented by a cardiologist called Dr. Robert Atkins in 1972 and first introduced through his book New Diet Revolution.

Many versions of the diet emerged throughout the years, but the original version now called Atkins20 is still popular. This version is split into four phases:

Also known as the induction phase, phase 1 should last for 2 weeks and until you are 15 lbs away from your goal weight. You eat no more than 25g net carbs per day but do eat liberal amounts of protein foods, healthy fats, cheeses, nuts, and seeds. You will most likely enter ketosis during this phase.

After you’ve lost enough weight, you slowly introduce foods with carbohydrates, including berries, whole milk, legumes, and tomato juice. Carb intake is between 20-50g per day, though. This phase should last until you’re 10 lbs away from your goal weight.

You continue to increase your net carb intake to 50-80g per day until you’ve reached your target weight and for at least a whole month. Foods you can start eating during this phase include all fruit, starchy vegetables, and whole grains.

Also known as the lifetime maintenance phase, the final phase limits carbs to 80-100g per day.

For reference, the Recommended Dietary Allowances (RDA) for carbs is 130g of carbs per day.

While keto and Atkins are both defined as low-carb diets, they still have many differences that set them apart. Here are just a couple of the differences between keto vs. Atkins explained:

You’ll be in ketosis for as long as you’re on the keto diet. You might even reach something known as “keto-adaptation,” where your body becomes fully adapted to running on fat as fuel.

With Akins, on the other hand, you’ll be in ketosis only during the first one or two phases.

The Atkins diet allows protein intake of up to 30% daily calories, while keto restricts protein to around 20% of calories unless you’re also very physically active.

This is to prevent the body from turning excess protein into glucose via gluconeogenesis.

Keto and the first phase of Atkins have the same level of carb restriction. But later phases of the Atkins diet allow for a wider range of carb foods and greater carb intake than keto.

Emphasis on fat vs. protein

Keto emphasizes fat, while Atkins is focused on protein.

The keto diet aims to help the body run on dietary fats with the goal of better glycemic control and weight loss, while Atkins aims to help you feel full, healthy, and energized with protein.

Keto and Atkins also have different health impacts, which mainly have to do with their differing effects on metabolism.

Since both are low-carb diets, it’s only natural that they are similar in many respects. Here are their main points of similarity:

Phase 1 of Atkins and keto are practically the same thing.
Their macronutrient ratios are similar, with only slight differences.
Both diets eliminate many of the same foods, such as refined sugar, white flour, and pasta.
Both diets can help you eat more real foods and eliminate processed ones.
Both are used for weight loss, glycemic control, and even seizure reduction.

But the main similarity is that these diets improve health by limiting your intake of harmful refined carbohydrates.

Low-carb diets are now widely studied for their potential benefits following decades of dismissal by the scientific community.

For one, they seem to be more effective than low-fat diets in treating obesity and diabetes.

There have been at least 9 clinical trials finding that the Atkins diet can lead to significant short-term and long-term weight loss. And over 20 such studies on the keto diet.

Their effects on glycemic control in diabetes are also well-studied.

The keto diet may have an advantage over classic Atkins in one respect: it can improve brain health because of the powerful impact of ketones on the brain.

Which One to Choose

If you’re on the fence about keto vs. Atkins for weight loss, glycemic control, or better overall health, consider these points:

Atkins may be easier to maintain long-term because it allows more carbs than keto.
The lower the carb intake, the greater the impact on blood glucose and lipids.
Keto can have a unique impact on the brain due to its ability to consistently raise ketones. Although, Atkins can have a positive effect on brain health as well.

And whichever diet you choose, do let your doctor know about it, especially if you have a health condition.