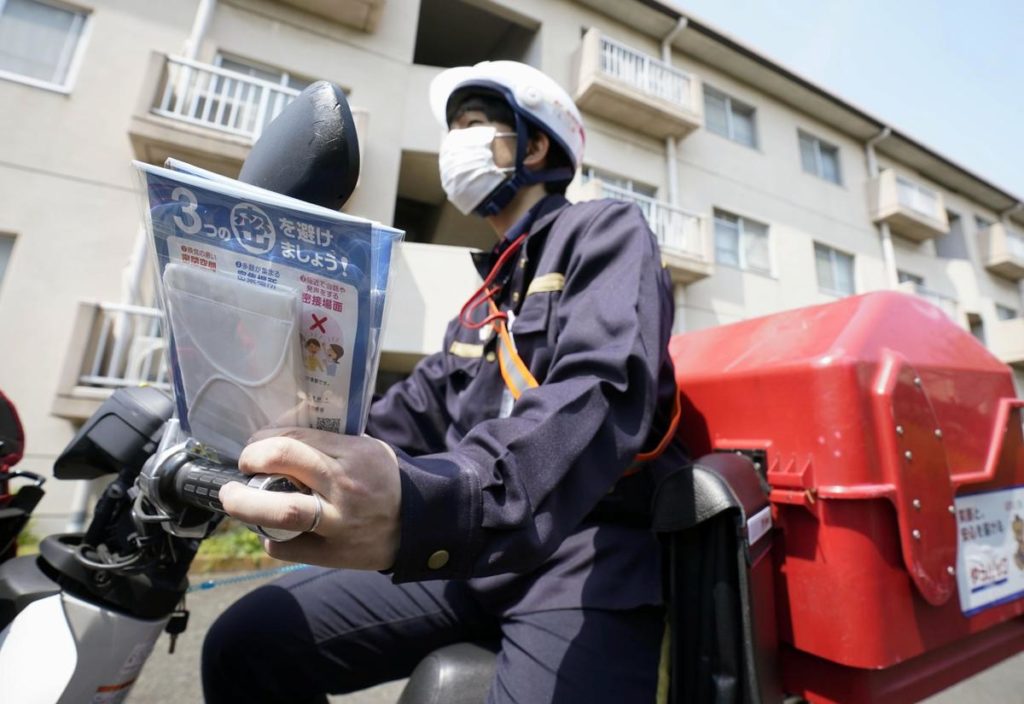 TOKYO (Reuters) – Japan’s effort to distribute protective cloth masks in its coronavirus battle has been marred by complaints about mould, insects, and stains, fuelling further concern that the government has botched its handling of the pandemic.

FILE PHOTO: A mail carrier delivers cloth masks under a government program for the distribution of two washable masks each to all households in Japan to help contain the coronavirus disease (COVID-19) outbreak, in Tokyo, Japan April 17, 2020, in this photo taken by Kyodo. Kyodo/via REUTERS

Just weeks after it began supplying every household with two washable, reusable masks at a cost of $430 million in the strategy to contain the virus, the government has been forced to replace some masks following reports of defects from recipients.

“I’m thankful to receive these masks, but is this a bug? Debris? Dirt?” asked Twitter user Aiai, posting a photo of two white masks in their original packaging, with what appeared to be an small insect trapped near the side seam of one.

In a manga sketch posted by another user, two soiled masks crash through a bedroom window to wake a man from sleep. The issue has generated its own Twitter hashtag, #Abenomask, a pun on Prime Minister Shinzo Abe’s “Abenomics” economic strategy.

The Health Ministry confirmed that by Friday it had shipped nearly 30 million masks to pregnant women, medical and nursing facilities and schools. These drew 1,903 complaints of soiled or defective products, the vast majority from pregnant women.

“We are asking manufacturers to confirm how these defects occurred, and asking for their cooperation in replacing the defective products,” a ministry spokesman said.

Japan’s tally of infections stood at 11,500 by Wednesday. As infections rise, Abe’s government faces growing pressure over what many see as delays prompted by a desire to avoid a shutdown of the economy.

Abe announced the policy of masks for Japan’s 50 million households on April 2, as calls mounted for a lockdown nationwide. Last week, he widened to the entire country a state of emergency declared in the largest cities on April 7.

“We would like to ensure that people have confidence in the safety of these masks,” chief government spokesman Yoshihide Suga told reporters on Wednesday.

The pandemic has caused a shortage of masks in Japan, where the items fashioned from paper or cloth are a common sight, particularly in winter and spring.

Electronics maker Sharp has halted online sales of masks until further notice, after overwhelming demand crashed its website soon after it began taking orders on Tuesday.

Stained, mouldy masks have provoked the latest social media complaints about Abe’s initiative, following gripes about their poor design and fit as well as criticism of the use of tax money.

“Hey, Abe – it’s not too late to stop sending those masks around!” wrote a Twitter user with the name “King of the Wind”.

“Instead, set up a good and broad testing system, provide enough medical equipment, and support the doctors and nurses who are working without sleep or rest.”

Previous Post Are Immune-Compromised Kids at Greater Risk From COVID-19? Next Post Trump Halts Immigration to U.S. During Coronavirus Pandemic