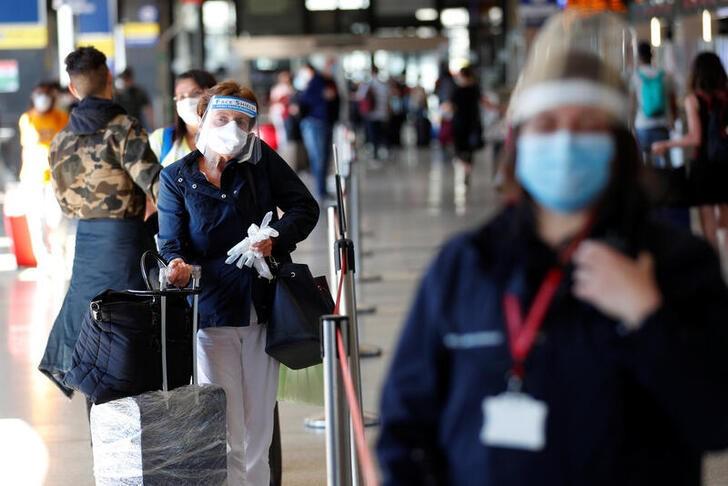 ROME (Reuters) – Deaths from the COVID-19 epidemic in Italy climbed by 85 on Friday against 88 the day before, the Civil Protection Agency said, while the daily tally of new cases jumped to 518 from 177 on Thursday.

FILE PHOTO: A passenger wearing a protective mask and a face shield talks on her mobile phone as she walks at Rome’s Termini train station as Italy relaxes more of its restrictions and allows free movement across the country to unwind its rigid lockdown due to the coronavirus disease (COVID-19) outbreak, in Rome, Italy June 3, 2020. REUTERS/Guglielmo Mangiapane

The total death toll since the outbreak came to light on Feb. 21 now stands at 33,774, the agency said, the fourth highest in the world after those of the United States, Britain and Brazil.

The number of confirmed cases amounts to 234,531, the sixth highest global tally behind those of the United States, Russia, Spain, Britain and Brazil.

Of the 518 new infections on Thursday, 402 were in the northern region of Lombardy which has been by far the hardest hit by Italy’s epidemic in terms of both cases and deaths.

Of the country’s 20 regions, the only others to register more than ten new cases on Friday were Piedmont with 49, Emilia Romagna with 17 and Liguria with 14.

The latest data may fuel unease over the government’s decision to end restrictions on movement between regions which became effective on Wednesday.

Some regional governors have complained that allowing people to travel freely out of Lombardy could spark new areas of contagion elsewhere in the country.

People registered as currently carrying the illness fell to 36,976 on Friday from 38,429 the day before.

There were 316 people in intensive care on Friday, down from 338 on Thursday, maintaining a long-running decline. Of those originally infected, 163,781 were declared recovered against 161,895 a day earlier.

The agency said 2.565 million people had been tested for the virus as of Friday against 2.525 million on Thursday, out of a population of around 60 million.