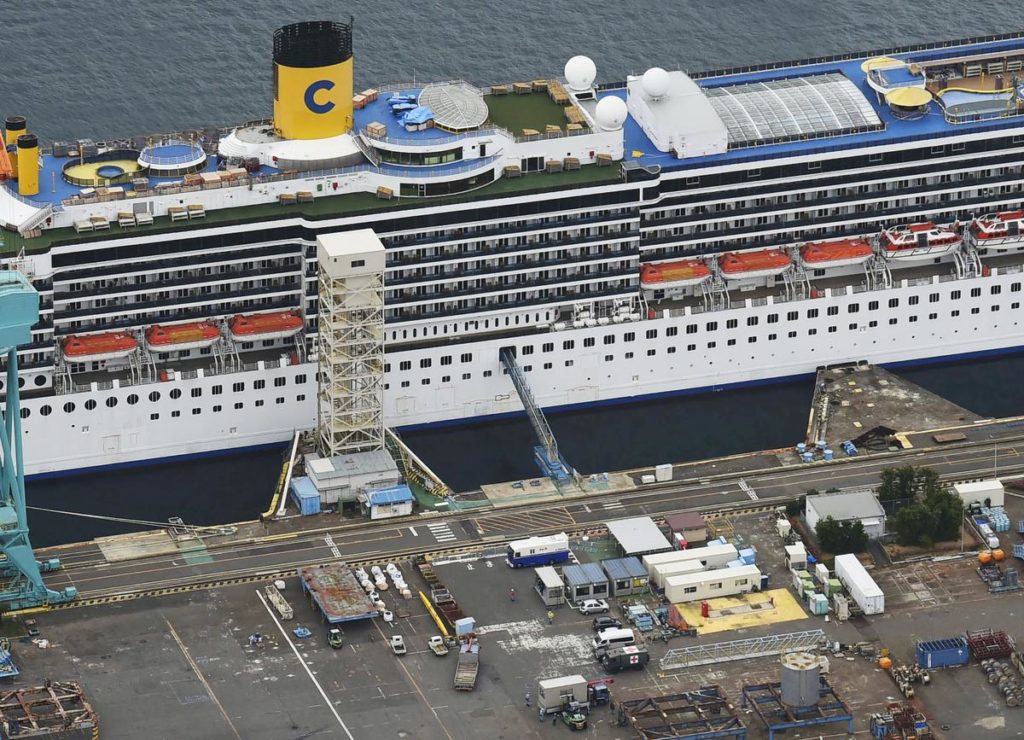 TOKYO (Reuters) – Nearly 50 crew members on an Italian cruise ship docked for repairs in Japan’s Nagasaki have tested positive for the new coronavirus, raising concern about the strain on the city’s hospitals if conditions worsen for those infected.

An aerial view shows Italian cruise ship Costa Atlantica, which has crew members confirmed with cases of the coronavirus disease (COVID-19) infection, in Nagasaki, southern Japan April 23, 2020. in this photo taken by Kyodo. Mandatory credit Kyodo/via REUTERS ATTENTION EDITORS – THIS IMAGE WAS PROVIDED BY A THIRD PARTY. MANDATORY CREDIT. JAPAN OUT. NO COMMERCIAL OR EDITORIAL SALES IN JAPAN.

Results on Thursday showed 14 more aboard, all either cooks or those serving food, were infected with the virus, an official in Nagasaki prefecture said. One patient who had been taken to hospital previously was now in a serious condition and on a ventilator, he told a live-streamed news conference.

The Costa Atlantica infections come after the cases on the Diamond Princess cruise ship in Yokohama two months ago, where more than 700 passengers and crew were found to be infected, although this time only crew members were on board.

The Costa Cruises-operated ship was taken into a shipyard in Nagasaki in western Japan in late February by Mitsubishi Heavy Industries (7011.T) after the COVID-19 pandemic had scuttled plans for scheduled repairs in China.

The latest cases have raised concern about the potential impact on Nagasaki residents after revelations some crew had left the restricted area despite assurances from the ship operator that they would stay within the wharf, according to Nagasaki officials.

Authorities are also concerned about the potential rise in patients who require hospitalisation, as an increase in domestic coronavirus cases strain medical services around the country.

Japan has seen more than 11,500 infections and close to 300 deaths from the new coronavirus, excluding figures from the Diamond Princess.

To make room at hospitals for severely ill patients, some local governments have begun monitoring those with milder symptoms in hotels or at their homes – a move that proved fatal for one man in his 50s in Saitama prefecture who died at home on Wednesday while waiting for a hospital bed.

Asked about the man’s death, Chief Cabinet Secretary Yoshihide Suga said on Thursday the health ministry was working to find out how many COVID-19 patients were being monitored at home.

On the Costa Atlantica, 48 positive cases have been found out of 127 people tested so far, bringing the infection rate to 38%. Those showing only mild or no symptoms remain on board, and officials said they hoped to complete testing of all 623 crew this week.

Previous Post Surge or No Surge, the Midwest Readies for COVID-19 Next Post LA County Coronavirus Infections Are Up to 55 Times That of Reported Cases