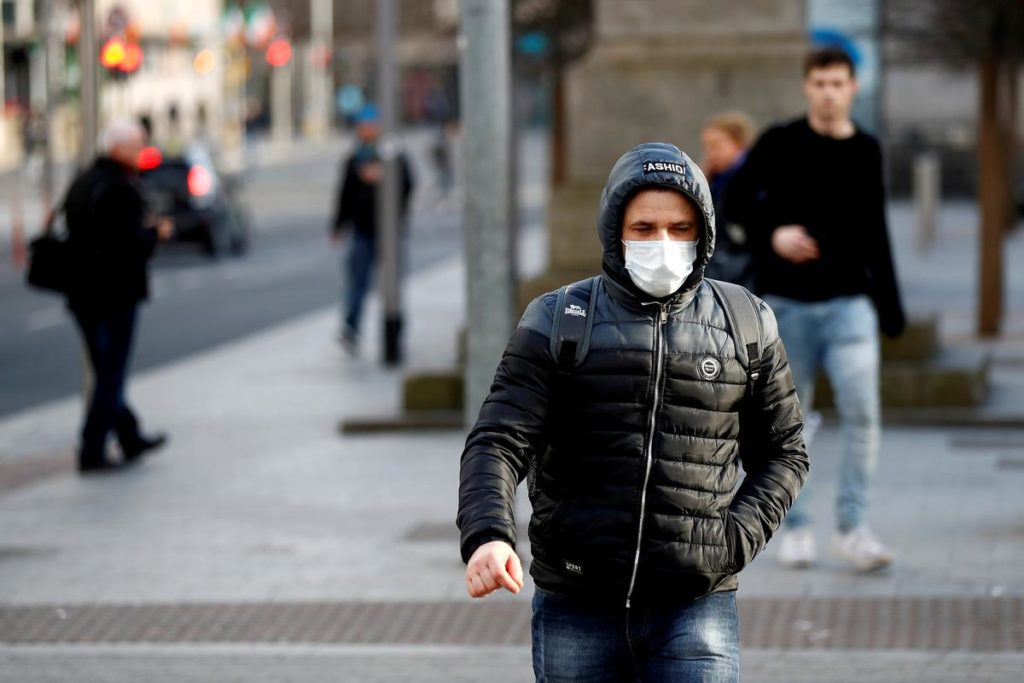 DUBLIN (Reuters) – Ireland plans to expand its coronavirus testing capacity to 100,000 tests per week over the next 10 days as it considers easing stay-at-home restrictions on May 5, Chief Medical Officer Tony Holohan said on Friday.

FILE PHOTO: A man wearing a face mask on St. Patrick’s Day as public events were cancelled as the number of coronavirus cases grow around the world, in Dublin, Ireland, March 17, 2020. REUTERS/Jason Cairnduff/File Photo

He said on Thursday data was showing Ireland had contained the first wave of the outbreak in the population at large, raising hopes that the restrictions that have closed large sections of the economy could begin to be rolled back.

Officials have said the ability to quickly test and isolate anyone who catches the virus is another crucial component in lifting the most severe constraints without having to reimpose them again if the virus does not remain suppressed.

“If we move into a situation where we lift restrictions because we are satisfied that the spread in the community is at a very low level, we have to be in a position to catch it as quickly as possible if there is to be an increase,” Holohan told a news conference.

“Our intention is to have the sampling, testing and results back to patients in a real time basis.”

The National Public Health Emergency Team said the planned seven-day testing capacity would remain in place for a minimum of six months and kick in with a likely change to its definition for testing that will widen the net of possible patients, Holohan said.

The health service will over the next 7-10 days first test all staff and residents in long-term residential care facilities such as nursing homes, where the outbreak has yet to be contained.

Nursing home residents account for more than half of all deaths and there are clusters of two or more cases in 166 of the country’s 550 retirement homes, accounting for just over 1,000 cases. Holohan said there was spare capacity for such testing.

The acting government on Friday enhanced the role of the state’s health quality authority to inspect care homes to ensure the implementation of a new infection control check list. But opposition politicians again criticised the response as being too slow.