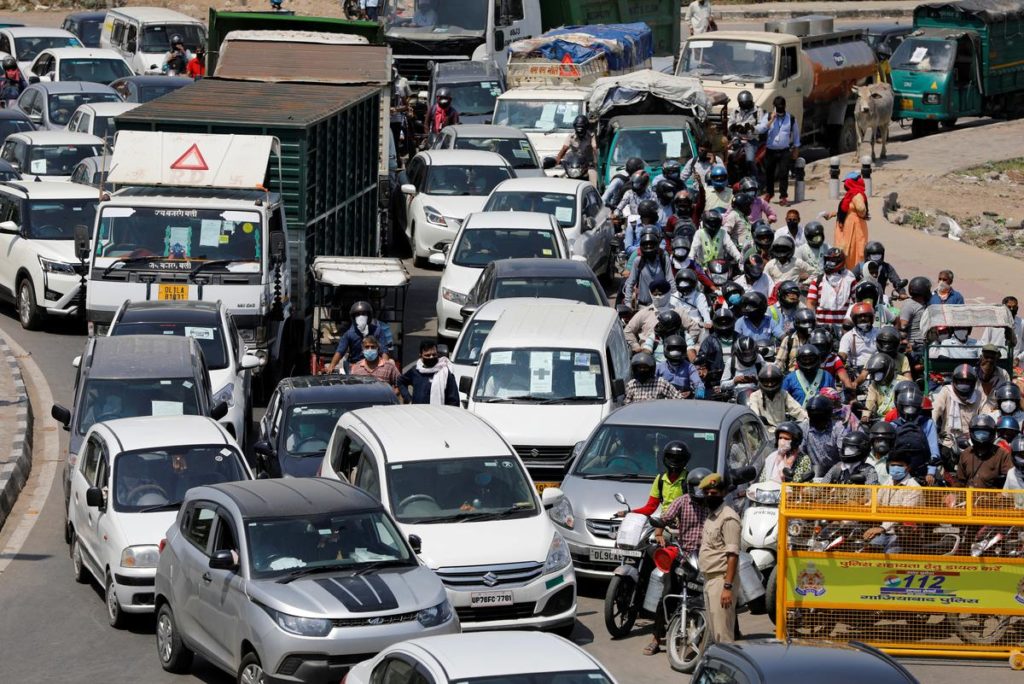 NEW DELHI (Reuters) – India has ordered a pause in testing for antibodies to the coronavirus because of concern over the accuracy, health officials said on Wednesday, complicating the fight against the epidemic as its tally of cases nears 20,000.

FILE PHOTO: Vehicles queue in a long traffic jam at Delhi-Ghaziabad border after local authorities stopped vehicular movement except for essential services during an extended lockdown to slow the spreading of the coronavirus disease (COVID-19) in New Delhi, India, April 21, 2020. REUTERS/Adnan Abidi

India trails many countries in conducting the standard swab tests to determine the presence of the novel coronavirus because of limited testing equipment and protective gear for medical workers.

Early this month, health authorities approved blood tests for coronavirus antibodies as a faster way to bolster the screening effort and ordered more than a half billion testing kits from China.

But the chief of epidemiology at the Indian Council of Medical Research, Dr R.R. Gangakhedkar, said he had asked health authorities to temporarily stop the tests for antibodies because of conflicting results.

“This is a first-generation test developed in just three-and-a-half months and needs refinement, the variations cannot be ignored,” he said.

Federal health experts have been sent to help authorities in states to validate the equipment.

Some European countries, including Spain, have also complained about the quality of the Chinese-supplied kits. A Chinese embassy spokeswoman in Delhi said she had seen reports about the tests and that they in were touch with Indian authorities to provide assistance.

India has detected 19,983 cases of the coronavirus, after an increase of nearly 1,000 cases in one day, according to government data. There have been 640 deaths, still a small number compared with tolls in many other countries, but officials say the infections could rise once a nearly six-week lockdown is lifted on May 3.

The antibody tests do not always pick up early-stage infections but show whether a person had the virus in the past, even if the person had no symptoms of COVID-19, the disease caused by the coronavirus.

In comparison, the swab test determines whether a person has the virus at that moment by looking for it in nose or throat secretions.

The health minister of the western Indian state of Rajasthan said the two tests were in some cases producing conflicting results, raising doubts about reliability.

“The kits were used for testing of patients who have already tested positive for coronavirus,” the state minister, Raghu Sharma, said.

“But the rapid test kits found them negative, which raised questions about the credibility of these kits.”

The health minister in the northern Indian state of Haryana, Anil Vij, said he had cancelled orders given to China and instead asked South Korea to supply them.

Both tests are seen as critical in the coronavirus fight, but antibody tests are a relatively cheap, fast means to sort populations into risk groups and measure the spread of the virus.

The federal government also announced on Wednesday that a new decree would be issued soon under which anyone attacking health workers could face up to seven years prison and hefty fines.

The move came after a spate of attacks on health workers around the country from people worried they were carrying the virus into the community.

This week, a mob attacked an ambulance carrying the corpse of a doctor who succumbed to the coronavirus in the southern city of Chennai, believing it to be unsafe for the neighbourhood.

“Health workers who are trying to save the country from this epidemic are unfortunately facing attacks. No incident of violence or harassment, against them will be tolerated,” said information and broadcasting minister Prakash Javadekar.

Here are official government figures on the spread of the coronavirus in South Asia:

* Afghanistan has reported 1,176 cases, including 40 deaths

* Maldives has reported 34 cases and no deaths

* Nepal has reported 45 cases and no deaths

* Bhutan has reported six cases and no deaths

Previous Post As Marijuana Use Grows, Researchers Want to Know How It Affects the Heart Next Post The Lowdown on COVID-19 Treatments