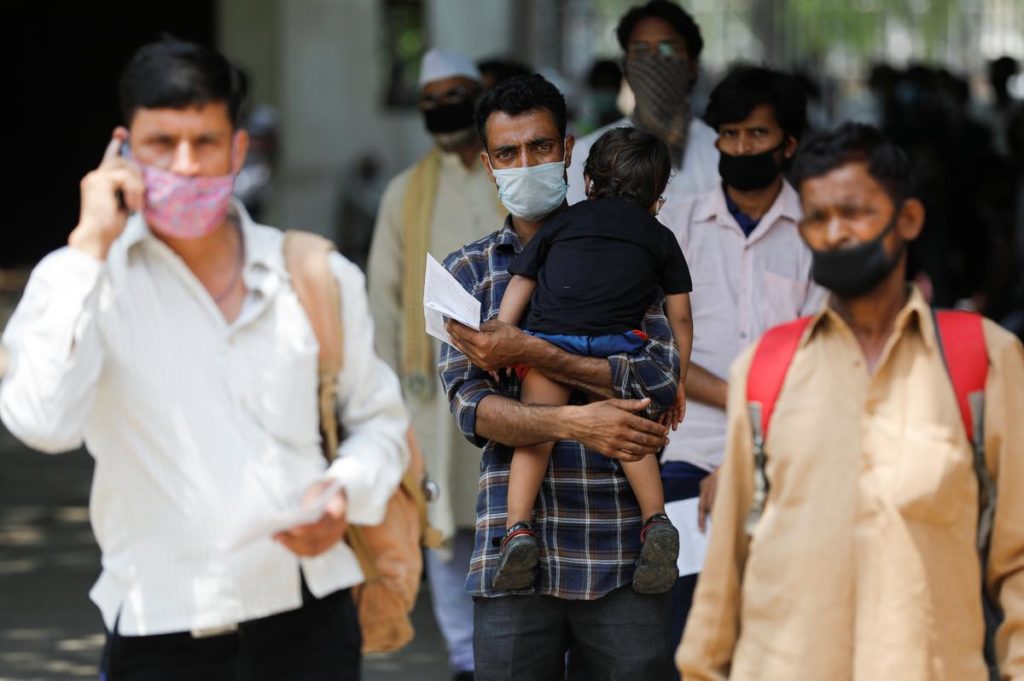 MUMBAI (Reuters) – India reported a record 9,887 new coronavirus cases in one day on Saturday and overtook Italy as the world’s sixth-biggest outbreak, two days before the relaxing of a lockdown with the reopening of malls, restaurants and places of worship.

FILE PHOTO: A man carries his son as he stands with others in a queue at a Railway reservation ticket counter after a few restrictions were lifted during an extended nationwide lockdown to slow the spread of the coronavirus disease (COVID-19), in New Delhi, India, June 1, 2020. REUTERS/Adnan Abidi

With its total number of cases rising to more than 236,000, India now has fewer infections than only the United States, Brazil, Russia, Britain and Spain, according to a Reuters tally.

However, India’s toll of deaths from COVID-19, the disease caused by the virus, is 6,642, small compared with those other countries.

Prime Minister Narendra Modi’s government, anxious to jump-start an economy crippled by the epidemic and put millions of people back to work, is easing its lockdown of the 1.3 billion population imposed in March, which the government says helped avoid an exponential rise in cases.

Restrictions will be loosened from Monday but some experts are worried it is too soon.

Giridhar R Babu, epidemiologist at the Public Health Foundation of India, in particular questioned the re-opening of religious places.

“We can survive and sustain the gains without … opening up religious places for sometime,” Babu said on Twitter.

The World Health Organization (WHO) said late on Friday India’s lockdown had helped it dampen down transmission of the disease, but there was a risk the cases could rise again.

“As India and in other large countries open up and people begin to move there is always a risk of the disease bouncing back up,” Dr Mike Ryan, head of WHO’s emergencies programme, told a news conference in Geneva.

People visiting places of worship will be asked to wash their hands and feet, and there will be no distribution of food offerings, sprinkling of holy water or touching of idols and holy books.

Previous Post Daily Aspirin Not A Good Choice for Healthy People Next Post Amid Pandemic, Protest Peacefully While Staying Healthy